The Hudson Highlands Pipe Band, the Cold Spring-based bagpipe ensemble, will perform in a sold-out concert at Carnegie Hall in New York City on Saturday, March 17, St. Patrick’s Day, with The Chieftains, a world-famous traditional Celtic music group. Scheduled for 8 p.m. in Carnegie Hall’s Stern Auditorium the concert is officially billed as The Chieftains With Paddy Moloney: Voice of Ages 50th Anniversary Tour. As of at least March 5, no tickets were left. Other musicians, including Low Anthem, an eclectic indie rock group from Providence, R.I., and a pipe band from Brittany, France, are also expected to join The Chieftains on stage. The Chieftains are Paddy Moloney on the tin whistle and uilleann pipes; Kevin Conneff, a vocalist who also plays the bodhrán (a form of drum); Matt Molloy, on flute; and Seán Keane, on fiddle. Hudson Highlands Pipe Band founder Seth Gallagher, who handcrafts instruments, has made uilleann pipes for Moloney.

Pipe Band President Mark Civita noted that the concert will be the third occasion on which the band has joined the Chieftains in performance. “The opportunity to play on one of the greatest stages in the world with one of the greatest Irish bands in the world on St. Patrick’s Day is the best recruitment tool a pipe and drum band could ask for.” He told Philipstown.info that the pipe band first played with the Chieftains in 2008.  “Paddy Maloney had written a tune in the ‘an dro’ style, a Breton country dance style tune which translated well to the pipes,” he explained  “Our second time playing with the Chieftains was in 2010 at Town Hall in New York City,” when “we performed the an dro tune as well as another Paddy Maloney tune called March to Battle. This year’s performance may involve one or both of these tunes. It’ll be a late night,” he predicted, “but one I’m sure our members will remember.” 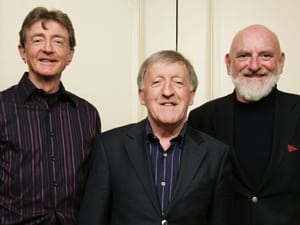 Carnegie Hall publicity material described the Chieftains as “Ireland’s official music ambassadors” and six time Grammy-award winners. It said they would be making “their triumphant return to Carnegie Hall on St. Patrick’s Day as the climax of their 50th Anniversary Tour, in support of their new album Voice of Ages. Paddy Moloney, `a musician of restless curiosity’ (The New York Times), is sure to bring his special musician friends from around the world to celebrate this incredible night with them.”

Clearly, those “special musician friends” include the Hudson Highlands Pipe Band. Established in 2005 by Gallagher – who currently doubles as Cold Spring’s mayor – the band consists of about two dozen members, from children to gray-haired adults. It was originally known as the Cold Spring Fire Company Pipes and Drums.