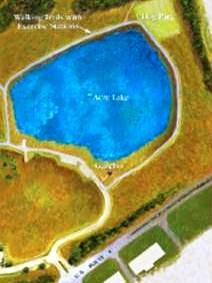 Citing ongoing threats to public safety at the North Highlands Park, the Philipstown Town Board last week discussed strengthening park regulations by turning them into codified laws, or, if all else fails, closing the park, after repeated violations of park rules.  In a formal monthly meeting Thursday (March 1) at which recreation issues drew considerable attention, the board also got a preliminary look at the costs — $335,000 to $390,000 — of improvements at Philipstown Park in Garrison and voted 5 to 0 to spend an estimated $2,000 to $2,500 on repairing the gym floor at the Claudio Marzollo Community Center, also in Garrison.

Appearing before the board, Recreation and Parks Director Amber Stickle explained the continuing problems at the North Highlands Park, located near Quarry Pond-Glassbury Court off Route 9 in the northern tip of the town. Stickle particularly focused on problems with the dog park, a place for dog owners to exercise their pets, where owners frequently let dogs run loose and  “go after children,” do not clean up droppings, and drive in areas forbidden to vehicles, including “up on a hill, sideways.” Scofflaw motorists have destroyed a path and a few weeks ago, Stickle reported, when a park patron tried to get another to obey the rules, an altercation ensued. Likewise, she said, “we seem to have a problem with non-residents abusing the fishing privileges up there.” She proposed that the Town Board turn the park rules into codified laws, to make them tougher and “get some enforcement … for the town’s safety.” Last summer, the town similarly turned the rules at Philipstown Park into actual laws.

The board previously discussed the Quarry Pond Park last July and at its Dec. 1 meeting and since then troubles have continued. Supervisor Richard Shea said that “I’ve been there and seen people drive right around the fence” into areas closed to cars while Councilor Betty Budney repeated her statement of December that she knows residents who now avoid the park, fearing for attack from uncontrolled dogs.

“That park is becoming a big, big problem,” Stickle emphasized. “And if we don’t do something, we could resort to having to close the park.”

“Rules are fine, but unless they are law they don’t have any force,” Shea concurred, adding that”if it continues to be a problem, like it is, the dog park is going to go. It is defeating the purpose.” Councilor Nancy Montgomery pledged support for “whatever we can do to help keep the park open. It’s a great park,” particularly popular with North Highlands residents but others in Philipstown as well, she said. “The trail in the back is just beautiful.”

Stickle also told the board that the Recreation Commission “is looking to get moving” on upgrading Philipstown Park through four projects: a well, estimated at $10,000 to $15,000; an expansion and improvement of the north field, at a charge of $250,000 to $275,000; irrigation of that field, expected to cost $25,000; and enlargement of the parking area, pegged at $50,000 to $75,000. The commission still needs to give formal approval of the plans, but the Town Board expressed backing for the initiatives.

“I think it’s a completely reasonable project,” Councilor John Van Tassel said. “It’s a wonderful facility and we really should have a good field for the town.”

“There’s no doubt it’s time,” Shea agreed. “Right now it won’t have an impact to the budget” with the end of a road-bond obligation nearing and thus opening up some financial flexibility, he said.

On another money-related matter, Shea said that Town Assessor Brian Kenny and town officials are working to bring a measure of tax relief to Continental Village residents whose properties lie in the Westchester County-based Lakeland Central School District and who consequently pay higher taxes than others in Philipstown and often, more than their Westchester Lakeland neighbors. One likely proposal is to lower the overall value of property in the Continental Village Lakeland section by 7 percent, the supervisor said. While not completely solving the problem, the proposal “is going to alleviate some of that” discrepancy, he said. Shea informed board members that they would receive a memo on the matter soon, to be followed by town dissemination of information to the public.

The board also unanimously agreed to spend up to $2,000 to hire Berger Engineering and Surveying of Poughkeepsie for assistance in applying for a grant for flood control and mitigation in creeks that suffered Hurricane Irene and tropical storm damage last year.

One thought on “Tough Talk on Quarry Pond Park Problems”