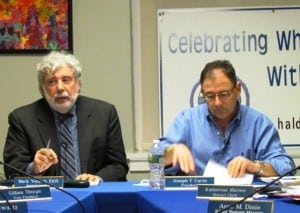 The Haldane Board of Education is inching closer to a final spending plan that will go before the district’s voters in May. Going into the March 6 meeting, draft plans called for increased spending of 1.93 percent or $417, 000 – as part of a total 2012-13 spending budget of approximately $22 million. Facing a state-imposed cap on any tax increase, dramatically decreased state aid and cost increases in some areas, it’s a tough budget year by any standard.  And everyone agrees next year will only get worse.

After circling several related issues, debating possible cuts, airing critical comments about the state of public education in New York State, and expressing universal trepidation about the future, it finally came down to numbers, or as Trustee Mike Junjulas put it, “The elephant in the room.”  The proposed spending increase mentioned above would result in a 2.65 percent tax levy increase. “I’d like to see us at 2 percent,” Junjulas said. To get to that 2 percent, $120,000 in additional cuts will have to be found beyond the $385,000 in reductions that have already been made – and which have helped the district stay within the state tax cap.

Trustee Peter Henderson agreed with Junjulas. “I support a 2 percent target… The cuts you’ve already made are sensible.”  He hopes another examination of the budget will reveal more areas where spending can be reduced and cited one area as a potential example. “Seventy thousand dollars for materials and supplies. It’s been that forever. When I see a big, round number like that I wonder…” He encouraged administration look at the budget line by line in order to find further spending cuts “without pain.” Henderson also said, “My feeling is we’ll squeak by this year.”

“If you give me a target – to go from 2.65 percent to 2 percent – I’ll bring a list [of cuts],” said Haldane’s Superintendent Mark Villanti.  Earlier, Villanti had outlined a list of areas where cuts could be made.  While the meeting was mainly devoted to making progress on the proposed spending plan for 2012-13, it was clear that trustees’ eyes are also nervously looking to the horizon. Villanti has pointed out numerous times that with state aid being reduced drastically, use of the district’s reserves and fund balances as a means of maintaining spending reducing the tax burden cannot be sustained in the long term.


Trustees react
“I don’t see the state coming to rescue us on a white horse,” School Board President Joe Curto said, before asking trustees how they wanted to proceed regarding the list of potential cuts. Junjulas said that eliminating the “bubble class” would cut one teacher without having to eliminate a program. “That’s the only reason I brought it up. I think next year’s budget discussion should start earlier – in September or October – what I call the “doomsday budget.”

Like Junjulas, Henderson was also looking to the future. “I’m thinking more about next year,” he said. “Next year’s discussion will include many of the things on your [Villanti’s] list.” He also wondered if “accepting a little pain this year” wouldn’t help draw public attention to the seriousness of the situation. “Next year looks horrific.”

“I don’t want to see things at the end of the list cut – the arts, kindergarten. Cut from other areas. I still think it’s a good budget – but those areas are too important,” trustee Gillian Thorpe said.

Trustee Evan Schwartz expressed optimism about how far Haldane’s programs have come in recent years and how voters will view the spending plan come May. “I think the public sees Haldane as being much more than it was in 2007. Hopefully, we won’t go crazy and sacrifice what we’ve gotten to at this point.”

“We’re not trying to scare the public,” Villanti said. “It’s a list of possibilities.” He said that going to a half-day kindergarten program would save the district $500,000 but he doubted that it would fly politically. “I think we need to choose items that are not disastrous. We’re not here for drama. We’re here to preserve programs.” He resisted the idea of increasing class sizes, especially in the primary grades, calling smaller class sizes at those early grade levels “one of the most important investments for the district.” 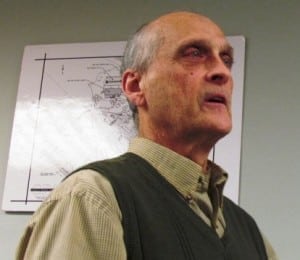 Operations, maintenance, transportation hold the line on spending
As part of the budget discussion, Director of Facilities Wayne Robinson presented his proposed spending plan for operations, maintenance and transportation. If all other areas had similar forecasts, trustees would face a much easier task in formulating the district’s budget. Operations spending is projected to decrease by $105,000 in 2012-13. The major reason for the reduction is the energy performance contract (EPC) that Haldane has entered into with Con Ed Solutions, which will reduce the cost of both electricity and heating fuel. Henderson questioned why the savings rate is estimated at only 26 percent when the EPC guarantees a 43 percent reduction. Robinson said all of the proposed energy-saving changes had not yet been implemented. He also said the new boiler was installed just two weeks ago and is still being adjusted. In addition, new, low-wattage exterior lighting that will result in immediate savings has not been installed yet. Villanti urged caution in assessing the EPC prematurely. “I’d be very cautious,” he said. “We’ll have an evaluator look, once a year [of the EPC] is complete. We’re pleased with what’s going on.”

Robinson projects a no increase in both maintenance and transportation costs. No new vehicles will be purchased in the coming year and the mild winter has been easier on the district’s buses and vans. Schwartz wondered about adding more low-maintenance propane fueled vehicles but Robinson said that because Haldane doesn’t have its own propane fueling station on campus and given the distances involved in many of the bus trips, increasing the number of propane vehicles isn’t practical at this point.

Budget discussions will continue at a meeting on March 13 beginning at 6:30 p.m. in the Merritt building.
Photos by M. Turton