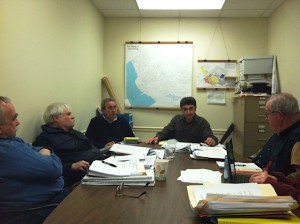 Village Planning Board wants public heard before proceeding with review

The Cold Spring Planning Board has joined the Special Board for a Comprehensive Plan in raising substantive questions about the proposed Butterfield development. Three days after walking the site, the Planning Board decided to stop its formal review of developer Paul Guillaro’s Butterfield plan before it really began. Instead the board intends to organize a public meeting to obtain the community’s view of needs and concerns. In addition, at its March 6 meeting at the Village Hall, Board Chairman Joseph Barbaro asked consultant Ted Fink to assist him in drafting a memo to the Village Board outlining the principal concerns and reservations of the Planning Board and the rationale for public input early in the process. The board scheduled a workshop for final approval of the memo on March 20.

Although the elected Village Board trustees have declared themselves the lead agency for reviewing the project, they are now confronted with deep doubts and some outright rejections of major aspects of the plan by the two appointed boards, which arguably contain much of the village’s collective planning wisdom.

As skepticism and opposition to the current plan mounts, the village is preparing for an election on March 20 to choose two of the five members who will ultimately vote on the future of any development at the Butterfield site. At the Philipstown.info candidates’ forum on March 8 the three aspirants, incumbent Chuck Hustis and challengers Tom Rolston and Matt Francisco, offered varied perspectives on the best way to address the issue.  However, they all agreed approval of any plans was likely a year away at best, which is certainly at variance with Guillaro’s expectations. Rolston said Guillaro had told him that day that he was frustrated with the expense of the process and the multitude of voices expressing   assorted views.

Based on the Planning Board’s usual scheduling of workshops for plan reviews, at least a month might pass before it begins to examine the latest plans provided by the developer. Given the critical comments the members offered about the present plan, it would appear it is in large measure dead on arrival.

Typically, the Planning Board holds a public hearing at the end of its review of a proposed project. The board does not usually permit public questions or comments during its workshops while they painstakingly go over an applicant’s site plans, asking for revisions as they proceed. But the scope and potential impact of the Butterfield project is clearly giving rise to non-typical thinking. The first sign of that was the Village Board’s decision to become the lead agency, superseding the Planning Board, which in this situation serves in a key, albeit advisory capacity, a position the members have groused about.

Barbaro led off the meeting indicating he believed the board needed to “take a pause,” later he called it a “full stop.”  He proposed instead the board discuss its general reaction to the plan so far, especially in the aftermath of its participation in the Saturday, March 3, site visit. Barbaro called the site walk “enlightening and interesting. I think it gave us a chance to really see what it is we have in front of us, at least from the applicant’s perspective what he is proposing to do with the land.”

He then called for holding a “charette” to involve the public in forming the Planning Board’s perspective on the project prior to the review of the detailed plans. “I want the community to tell us what they want. I don’t want to wait for a public hearing at the end.” Charette is a term of French derivation often used by professional planners and architects for a meeting wherein participants work collaboratively (usually in small groups) to arrive at solutions to a problem, sometimes in a time-sensitive manner.

Asked during the meeting what he thought the Village Board reaction might be to a delay in the process, Barbaro said his proposed halt had the support of four (unnamed) of the five trustees with the fifth’s position unknown.

Barbaro’s critique of the plan was the sharpest. He underscored the need for the plan to be “tax positive,” meaning the village should realize revenue from the project rather than have to expend funds either for infrastructure needs or in school taxes. He also rejected the senior housing concept, a mainstay of the plan, preferring, he said, to see an emphasis on more retail shops and other business enterprises. Later in the meeting he argued “the best way to protect Cold Spring seniors was to protect their homes from rising property taxes.” Barbaro warned that apartments intended for a particular constituency could over time “through loopholes” change their purpose and that the village could see an unintended influx of young families with children causing a jump in school taxes.

The other members of the Planning Board had varied views on different plan aspects but formed a rough consensus around key issues they see as stumbling blocks to approval.  Some of the issues, subject to the board’s final review, will be in the board’s memo and form what Barbaro described as “the foundation of a plan for moving forward.” Among the issues were:

See some of Planning Board members discussing their concerns in more detail.

Board members also expressed concern about the developer’s expenses and rights as a property owner and the specter of litigation if the process drags on and becomes ensnared in questions of law and appropriate procedure. In addition to preparing the memo expressing the board’s view, Fink was also asked to see about having a detailed drawing done illustrating the Planning Board’s suggested changes to the site plan.
Photo by K.E.Foley