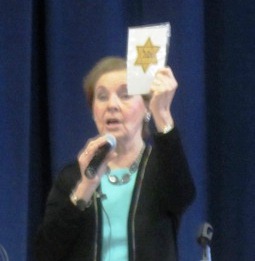 Marion Blumenthal Lazan reminds them: “You are the last generation who will hear first-hand accounts”

Haldane and Garrison middle school students sat riveted in their seats last Wednesday, privileged to hear a personalized account of the horrors of the Holocaust from a survivor, Marion Blumenthal Lazan, who was a child of four when she and her family were transported to the concentration camp at Bergen-Belsen. In his introductory remarks, Haldane Elementary / Middle School Principal Brent Harrington noted, “Too many students see history as a collection of boring dates. Why history matters: it’s not just distant events that have no impact on our lives — the true study of history allows us to self-reflect, consider our values. We are privileged today to be able to hear the story from someone who lived through the worst in history.”

At this, the sprightly, smiling Lazan took to the podium, first giving a special thank you to her “cousin,” young Jacob Cox, a Haldane ninth-grader, calling him “the catalyst” for bringing her to the school. (Actually, according to Jacob, his “mom’s first cousin is Marion’s husband Nathaniel.”)  Jacob knew that she did speaking tours, and he spoke with middle school social studies teacher Kelli Annesi, and then wrote a letter to Principal Harrington, and together they all made it happen, inviting the Garrison students to share in the experience. 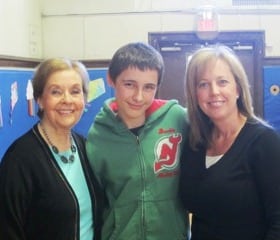 Lazan, a confident speaker, told the story of her family’s travails, contextualizing everything clearly for the students. She began with a description of their life as Jews in Germany in the early 1930s, calling that life “very much like yours today. My father had a shoe business and we lived comfortably above the store, never having any idea of what would follow.”  Describing the 1935 Nuremberg Laws, she detailed the rapidly escalating changes, from restrictions on shopping, attending the theater, to having to wear a big letter “J.” Lazan’s family decided to leave, and received their papers.

On the night of Kristallnacht, Lazan’s father was taken away to Buchenwald, released ten days later because their papers were in order. Lazan noted the sad irony that just a few years prior, her father had been awarded the Iron Cross for his military service to Germany in World War I. In January, 1939 the family left for Holland; from there they were to sail to the United States. That December they were deported to the Dutch detention camp Westerbork to await their departure, but in March, 1940, the Germans invaded Holland and they were trapped. Whereas under the Dutch Westerbork had been tolerable, when the Germans took over, barbed wire was put up and the atmosphere changed completely.

The residents at Westerbork were aware of regular transports to concentration camps — by 1942 these were happening “almost every Tuesday morning.”  By Jan., 1944, it was the Blumenthal (Lazan is her married name) family’s turn to be shipped out. “We were naïve and welcomed the move,” said Lazan, but “when we saw the cattle cars, our fears mounted. It was bitter cold, rainy, when we arrived at Bergen-Belsen, greeted by guards with rifles and vicious German shepherd dogs. There was electrified barbed wire everywhere, guards in high towers, bright searchlights.  We were in different sections, men on one side, women the other, 600 of us crammed into each crude wooden, heatless barracks made for 100 people.”

Lazan illustrated her description of life at the camp with the small details which took her listeners into the heart of the story: bitter winters, straw-filled mattresses, one thin blanket; no trees, flowers. Toilets, made from long wooden benches, holes cut into them, no soap, privacy, water to wash, located at a great distance from the beds. Years of never brushing teeth. Seeing wagons and realizing for the first time that they were filled with dead naked bodies. Describing daily life, Lazan recounted that “every morning we were ordered to line up on a huge field for a count. We often stood there from early morning to late night; frostbite was common. Our diet was a slice of bread a day, turnips, potato peel. Bread was later given one time a week only. Once a month we were marched to an area to shower, ordered to undress. We had heard of the gas chambers and were never sure if it would be water or gas coming out of the shower.”

Escape attempts were common, and the sight of dead bodies hanging, electrocuted from the barbed wire, was an everyday one. “We tripped and fell over the dead.” Lazan did not hold back on her description, speaking to the children: “There was a constant foul odor, filth, the continuous horror and fear surrounded by death is indescribable.” She also described the mechanisms she developed to attempt to conquer her fears. “I invented games: if I could find four pebbles, the same size and shape, my family would survive. That game gave me distant hope.”

Continuing the story in April, 1945, Lazan described how, as the Russian army was closing in, they were taken by train on a two-week journey to somewhere in Eastern Europe.  This turned out to be one of the worst stretches of the war for them, with little water and widespread typhus, 500 died en route.  “After 14 days, German guards stormed the train demanding civilian clothing so they wouldn’t be recognized; the Russian army liberated the train.”  Lazan, then 10 years old, weighed a mere 35 pounds, her mother 60.  Their heads shaved to rid them of lice; they had to re-learn many things. “We were all weak, ill, exhausted, but the spring of 1945s weather was beautiful and there was a wonderful, excited feeling.” In a bitter turn of events, Lazan’s father caught typhus and died from it, just six weeks after liberation. She, her brother, and mother, whom she credits with keeping her alive, survived, and, incredibly, all are still living today, her mother (whose current picture she displayed proudly) recently celebrated her 104th birthday.

Lazan didn’t mince words, though, describing her brother as profoundly affected by his experience, probably because, being a few years older, he saw and understood more. He chose not to have children, and does not discuss his early life experience.

Lazan didn’t end her story with the conclusion of the war. She went on to describe their time spent in Holland afterwards, where “we learned to live all over again; everything tasted good to us.” A Jewish charitable organization arranged their passage to the United States, and, in April 1948, exactly three years to the day of their liberation, the family arrived by ship into Hoboken, sailing past the Statue of Liberty on arrival. A home was found for them in Peoria, Illinois, and there, though 13 years old, Lazan was placed in 4th grade because of her lack of English. Nonetheless, she graduated five years later, and, two months after graduation, married a college student she met in Peoria, Nathaniel Lazan — they will celebrate their 59th anniversary this August, and he was in attendance at the talk. They have nine grandchildren and “one magnificent great-grand-daughter!” 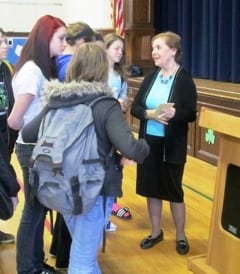 Students continued the discussion after the presentation

It was at this juncture in the talk that Lazan outlined the true purpose of the many similar presentations she gives around the country: “I am grateful that I survived and can perpetuate my heritage.” She began speaking publicly about her experiences in 1979, and was approached to turn her story into a book. Co-written with Lila Perl, her memoir, Four Perfect Pebbles — which some of the students had read before attending the talk — was published in 1996; it has now been translated into German, Dutch and Japanese.

Towards the end of the talk, Lazan told the students she had a favor to ask: “Yours is the very last generation that will hear these stories firsthand. Please, share these stories — it is you who will have to bear witness. The horror of the Holocaust must be taught and kept alive.”

Showing the students the original yellow star sewn onto her clothing, Lazan continued, “Each of us must do everything in our power to prevent this from reoccurring. We must have respect for each other, beginning in our homes, our towns. … Let us look for similarities, and respect the differences. … We mustn’t generalize and judge an entire group by the actions of some members of the group. …  It is not cool to follow anyone’s lead without first finding out what their intentions are. … By listening, I hope that you will prevent our past from becoming our future.”

Questions from the audience were taken after the talk, and, after sharing with her young audience that not only did she have a website, but also a newly-minted Facebook page (that was met with hearty applause), Lazan concluded by telling the students that they must not take their freedom for granted, and “I wish each and every one of you a healthy, happy, productive future in a world full of love and people.” Photos and hugs with many of the students followed.

One thought on “Personalizing History: Holocaust Survivor Tells Her Story to Haldane and GUFS Students”