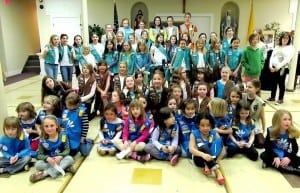 Candlelight ceremony at Our Lady of Loretto

At 7 p.m. on Monday, March 12th, Girl Scouts around the country gathered together in their communities to mark the 100th birthday of Girl Scouting with a candlelight ceremony. The Hudson Highlands group of 162 Garrison and Cold Spring scouts celebrated at Our Lady of Loretto parish hall where the girls had cupcakes, sang songs and recited the Girl Scout Promise.

Juliette Gordon Low founded the Girl Scouts in 1912 after returning home to Savannah, Georgia from a meeting with Sir Robert Baden-Powell, founder of Boy Scouts and Girl Guides in England. Low made an historic phone call to her cousin. “I’ve got something for the girls of Savannah, and all America, and all the world, and we’re going to start it tonight,” she said. They began making plans immediately and on March 12, 1912, Juliette Low gathered 18 girls together to organize the first two American Girl Guide troops. She changed the name of the organization one year later to Girl Scouts of the USA. 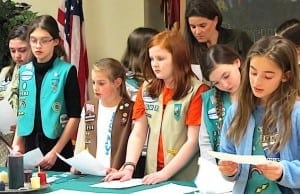 Since 1912, about 50 million girls have joined the Girl Scouts, the organization in which they learned values, leadership and practical skills, often by earning those iconic badges. Currently, there are about 3.2 million active members. As part of the 100th birthday celebration, Girl Scouts declared 2012 the Year of the Girl with a commemorative badge. Top priorities for 2012, “The Year of the Girl,” include an emphasis on technology, financial literacy and career development, particularly in the fields of math and science.
Photos and video by M.Rubin