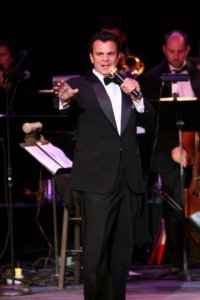 Singer Doug Ferony will be bring some Italian-American musical flavor to Beacon’s St. Joachim as he and his six-piece band perform a benefit concert for the church on March 24 at 7 p.m.  Singing and swinging from the canon of Sinatra and the Rat Pack, Ferony will be digging deeper than just entertainment, “What I enjoy most about standards and swing is that I can understand and relate to the lyrics. I pride myself in doing justice to lyrics and I try to bring a lot of passion and fun to the music,” Ferony said.  Ferony’s focus is never on mimicking the material of the singers he admires, but displaying a sound of his own within the tradition of first-class singing.

Ferony recalls his parents playing Frank Sinatra, Andy Williams, Tony Bennett and Dean Martin records around the house in addition to Rosemary Clooney and Ella Fitzgerald. He remembers being very impressed by Frank Sinatra at an early age. While growing up, he played drums for a time, inspired by Buddy Rich. However by the time he got high school, he knew that he wanted to pursue a career in singing. In 1985, Ferony moved to Los Angeles where he studied voice with Howard Austin and started gigging. He also went to acting school and began working in films. Through the years he has appeared in many, including Back To School, GoodFellas, Spiderman II, and The Brave One, in addition to such television series as Law & Order and The Sopranos. But singing before audiences has been his main love. Ferony spent much of the 1990s in New York City and fondly remembers performing three nights a week with a trio at the World Trade Center during 1995-96, singing regularly at the Supper Club with his big band, and with a piano duo at Tavern on the Green.

Ferony currently performs all over the country at supper clubs, casinos, racetracks, cruises and concerts, and he recently performed at the Paramount Center for the Arts with veteran singer Al Martino. Other performances include the Westchester Country Club, Empire City/Yonkers Raceway, the C-Note Jazz Club, The Arthur Ashe US Open, and on the Las Vegas Strip at the Monte Carlo Hotel and Casino. His numerous recordings include I’m In Love With A Girl (title track featured in the film, “Mr. Vincent), This One’s For You, Time After Time, It’s Christmas, I Ain’t Got You, and America’s Greatest Songs.

Jazz author and All Music Guide for Jazz Senior Editor Scott Yanow has written,  “When Doug Ferony sings, his warm voice, high musicianship, enthusiasm, and sincerity make the music he performs infectious and joyful, even when he is interpreting a touching ballad. It is always obvious that he loves timeless standards and has the voice and phrasing to make them sound fresh and relevant.

Tickets for Italian Night are $35 per person, and include live music, dancing, dinner, dessert, beer and wine.  Call Marianne Dahl (845-831-5406) for reservations. Reservations must be made by March 20.
Photo courtesy of the artist.