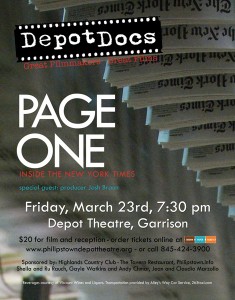 The Gray Lady Sings the Blues

The opening shot of Andrew Rossi’s fascinating, year-in-the-life of the newspaper of record, next up in the Depot Docs 2011-2012 season on Friday, March 23, is an elegant set-up for the story at the heart of the film. Huge rolls of clean newsprint move towards the towering, industrial-strength printing presses, where they are disgorged as complete editions of the paper. Next seen stacked, bundled, and bumping along conveyor belts, they are finally loaded onto Times delivery trucks, which drive off into the sunrise, bound for readers in the City, in the country, in the world. A short time later, Bruce Headlam, the Times Media Desk editor and one of the staffers featured in the film, neatly sums up the images we’ve just been shown: “It’s still a very old school business; trees are still cut and papers are still delivered.”

And therein hangs the tale, or rather, lies the rub that Page One takes us inside to witness. For this is 2010, long past the industrial age when the Old Gray Lady got her start and grew to pre-eminence. Not the least of it is that the world has gone digital. In economic terms, the advertising revenue that paid the way has fallen precipitously. At the same time, according to one of the film’s talking heads, Clay Shirky, Professor of New Media at NYU, “Publishing has gone from something being done by a specialty class to being something that literally every connected citizen has access to…that reduction in advertising revenue coupled with the competition for attention…has turned this from a transition to a revolution.” And that revolution will not only be televised, it will be streamed live on the internet, Skyped, tweeted, blogged, and texted.

While many are the talking heads in Page One (Daniel Ellsberg, Carl Bernstein, Gay Talese, Katrina Vanden Heuvel, Jimmy Wales, and Julian Assange, to name a few), what makes the film much more than what media columnist and reporter David Carr, one of the film’s unlikely stars, call’s “corporate portraiture” is its focus, not on the business model or the institutional gravitas of the paper, but on the human beings that are its working capital, and have made it great. Although we get to see and hear from a few at the editorial high end – Bill Keller and Jill Abramson. former and current executive editors, and even Arthur Ochs Sulzberger, the late publisher, makes an archived appearance — Rossi is most interested in the journalists who work the beats, develop the stories and write the copy, and the newsroom editors who assure that the stories are, in Carl Bernstein’s words, “the best available version of the truth.”

The aforementioned David Carr seems to have come to Rossi from Central Casting: an intense, sometimes arrogant, crusty and profane true believer in the New York Times and his own journalistic chops. We follow Carr’s pursuit of the bankruptcy of the Tribune Company, his story of the odd-coupling of CNN and the VICE media conglomerate, and, of course, his appearance on The Colbert Report. Other Media Desk staffers seen at work include Bruce Headlam and Brian Stelter (on the WikiLeaks release of the Iraq “Collateral Murder” video), Richard Pérez-Pena, and Tim Arango. While the film’s co-writers, Rossi and Kate Novack, paint the portrait of one critical year in the life of the Times, and of the wild currents in still roiling American journalism and media with a very broad brush, it is the miniatures of these and other passionate and committed journalists that make Page One a front page story.

Page One: Inside the New York Times will be shown at the Philipstown Depot Theatre on Friday, March 23, at 7:30 p.m. A Q&A with special guests director Andrew Rossi and producer Josh Braun, and a reception will follow the screening. For tickets, which cost $20, visit Brownpapertickets.