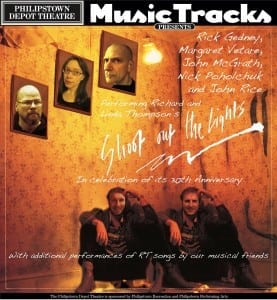 A group of local musicians is about to pay a very personal tribute to what many believe is one of the great albums of all time.  Richard and Linda Thompson’s Shoot Out The Lights, originally released in 1982, was recently reissued to celebrate its 30th anniversary. The original album earned the number nine spot on Rolling Stone Magazine’s list of the Top 100 Albums of the 1980’s. Richard Thompson has also been honored by being named to the magazine’s list of top 20 guitarists.

In addition to being recognized for its superb music, Shoot Out The Lights is wrapped in musical mythology as well. The album speaks – or rather sings – of a badly deteriorating relationship and the Thompsons themselves split just as the record was released. Despite the fact that several of the songs had been written long before the demise of the marriage, many fans took the album to be a very literal translation of the Thompson’s story. Fans could hardly be blamed. Even though Richard and Linda’s marriage had imploded, they still went on tour together to promote the album. By all accounts it was at times raucous, at times heartbreaking – and performed with an energy that was unmistakable in its passion. Joe Boyd, who produced the album, described the tour this way, “Linda kicked Richard in the shins during a guitar solo in Providence and threw a bottle at him in the Buffalo airport, but sang with an intensity I’d never heard before… the heartbreaking ballads poured out of her and mesmerized audiences. The band, meanwhile, kept their heads down and amazed audiences…with their precision and power. Richard was his usual genius self, only more so.”

Why would a group of local musicians take on an icon? “Because it’s one of the best of all time,” Vetare said, recalling how the project began. “John and I found ourselves working on several of the songs. With his twisted sense of humor he simply said, ‘Why don’t we do the whole album?”  That was more than a year ago. It wasn’t hard to convince vocalist and guitarist Rick Gedney to join the project. “For me every song holds up on its own. They’re all great songs – and collectively they work so well together,” he said. “The sequencing is pretty incredible too. It sort of takes you on a journey.”

When Vetare, Gedney and McGrath speak about the Thompsons and Shoot Out The Lights it is with a kind of awe and reverence you might expect from a twelve year-old Yankee fan who has just met Derek Jeter.  They aren’t just fans. They are enthralled – and almost embarrassed to hint at anything critical. “Richard was such a really good song writer. His voice was the weak part,” McGrath said of Richard. “But he was paired with Linda, one of the all-time great singers,” Vetare quickly added. McGrath put the two thoughts together. “She really was a great vehicle for his lyrics,” he said.

Gedney especially appreciates the lyrics and Thompson’s virtuoso guitar playing on the album. “The lyrics are so…tight, deep…intelligent…it rings out on all levels for me. And I’ve been working on learning Richard Thompson guitar parts for years.” His tone of voice alone said it is no mean feat.  When asked how it feels to be covering such a highly respected album, Gedney said, “We’ve set the bar pretty high.” Vetare was less subtle. “What were we thinking?” she laughed. “We just want to honor the music.”

Part of the duo Open Book, along with his life partner Michele Rubin, Shoot Out The Lights is something Gedney can relate to personally. “Both of us are divorced. There are things I see in it…it’s inspirational to us as a duo,” he said.

If you’re thinking that because the album deals in part at least with the difficulties of maintaining a good relationship, McGrath doesn’t feel you have to worry about going home depressed. “There are so many elements to it. All of the songs have a different appeal.”

The group will perform all eight songs from the original album. Side one includes: Don’t Renege on Our Love, Walking on a Wire, Man in Need, and Just the Motion and side two includes: Shoot Out The Lights, Back Street Slide, Did She Jump or Was She Pushed? and Wall of Death.

The afternoon will also include a number of musical guests. Rubin will join Gedney as Open Book to sing Persuasion, a song co-written by Tim Finn and Richard Thompson. The latter recorded a superb version of that collaboration with his son Teddy Thompson.  Also performing as special guests will be Kathleen Pemble, Susan English, David Dasch and Charles McEnerney.

Seating at the Depot Theatre is limited. Order tickets in advance by calling (845) 424 3900 or purchase them online at Brownpapertickets.