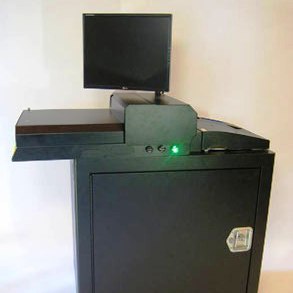 The new voting machine now in use

Polls busy up until final minutes

So many Cold Spring citizens surged to the polls for village trustee election Tuesday (March 20) that polling officials exhausted their supply of machine ballots and resorted to “emergency” ballots for two last-minute voters. Another two dozen voters submitted absentee ballots. Whether by machine or by absentee ballot, in all, 623 voters cast 995 votes: 410 for incumbent Trustee Charles Hustis, 401 for political newcomer Matt Francisco, a project manager; and 184 for Tom Rolston, owner of The Depot restaurant. Because three contenders vied for two trusteeships, each voter got to select two candidates; nonetheless, 23 voters wrote-in another name, often that of departing Trustee Airinhos Serradas.

The 2012 vote count topped that of two previous elections when, like this year, the contest involved only trustee seats and not the mayor’s office. At his first election in 2010, Hustis got 237 votes, ahead of the 219 for Airinhos Serradas, 213 for Dave Heberling, and 202 for then-incumbent Trustee Lynn Miller. Another 63 votes went to a candidate who had withdrawn from the race. That year, 475 residents voted by machine, with a small number of others using absentee ballots. The total number of votes cast in 2010 was 934.

According to figures from the Village Hall archives, in 2008, there were 663 total votes cast: 251 for then-Trustee Seth Gallagher (now mayor); 223 for Gordon Robertson, and 189 for then-Trustee Karen Dunn. However, in 2006, when four candidates fought over two seats, the total number of votes was 1,355.

For 2012, although Village Clerk Mary Saari ordered more machine ballots than she anticipated needing, strong interest in the race meant that the village still ran short -– at the 11th hour. With the poll-hour closing of 9 p.m. five minutes away, it seemed there had been just enough machine ballots to supply all voters. Then, at about 8:58 p.m., a couple arrived to vote. Since there were no more regular ballots, and so, following established electoral rules, Saari and her colleagues at the poll station gave them “emergency” ballots, similar to absentee ballots. The pair duly cast their votes. “In truth, it is very hard to know” exactly how many machine ballots will be needed, Saari said the day after the election. Yet, the possibility of using emergency ballots means no one is denied a chance to vote, she added.

Had all of this year’s 623 voters exercised the option to vote for two trustee candidates, the total number of votes would have been 1,246 –- not 995. The results indicate that some voters decided to “bullet” or “target” vote, picking only one candidate. Initially, avid Francisco supporters seemed inclined to support Rolston as well. Ultimately, though, Election Day off-the-record comments suggest many voted for Francisco alone. While hesitant to back Hustis (seen in some quarters as casting puzzling votes as a trustee and doing little while on the board, forcing others to bear a heavier load), they also expressed misgivings about Rolston, described as too blustery and opinionated, and, some feared, tilted toward the developer’s concerns in the controversial Butterfield property project.  Rolston often attends Village Board meetings and speaks out bluntly.
Philipstown.info file photo