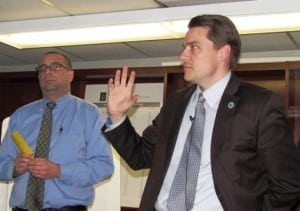 Despite what will be a lean budget in 2012-13, followed by what trustees and administration expect to be an even more difficult fiscal outlook in 2013-14, the Haldane School District is finding ways to move forward. The agenda for the March 20 Board of Education workshop included a pre-budget hearing and special presentations on improvements to the school auditorium and continuing the iPad pilot project.

The numbers have not changed for the proposed 2012-13 budget since the board announced further cuts in spending at its March 13 meeting. Superintendent Mark Villanti and Business Manager Anne Dinio reviewed the proposed spending plan as part of the pre-budget hearing last week. The final budget proposal, which goes to voters on May 15, is expected to be adopted at the board’s April 10 meeting. Budget to budget, from 2011-12 to 2012-13, spending will increase by 1.38 percent. In actual dollars that amounts to an increase of $297,463 or total spending of $21,927, 476.  That will result in a tax rate increase of 1.95 percent. Of the total proposed spending, $17,462,504 will be raised through the local tax levy – about $124,000 less than the maximum allowed under state law.

Villanti continued with his recurrent theme – that the 2012-13 budget problem is related more to revenue than to spending – state revenue in particular. He emphasized that state revenue has declined by approximately $500,000 in each of the last two years. Federal stimulus funds and the federal Jobs Bill provided some buffer, but those funds are no longer available. With the reduction of state aid likely to continue, and with reserve funds depleting, the trustees and administration look to next year with considerable concern.  “They are our savings for a rainy day,” Villanti said. “But the storm has erupted – and it’s raining pretty hard.” 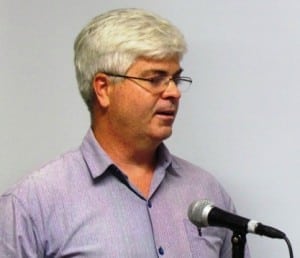 With a projection room that dates back to the 1930s no one has questioned the need to make improvements to Haldane’s auditorium, especially as the arts have taken on a higher profile. Seamus Carroll, chairman of the Fine Arts Committee, presented highlights of a master plan for improvements beginning this summer – including upgrades in lighting, sound, acoustics, video projection, and storage and stage presentation. With the total project cost estimated at $130,000, work will be phased over two years as funds become available.  Phase one will modernize the projection and control room at a cost of $30,000 with half  that amount coming from savings realized in the roof repair project and the  balance through already raised private fundraising.

Approximately $80,000 is expected to come from the bond issue to improve Haldane’s athletic fields since state aid is dependent on making improvements to indoor facilities as well as the sports fields. Carroll said the committee’s strategy was to “scour the community” for people who work in related fields to help reduce costs. Thanks to a local parent who works for a large audio-visual firm, the video projector will be purchased for about half the retail cost. Carroll said the project’s full price would have been more like $175,000 without such local contacts.

Trustee Peter Henderson, said, “I read the 50-page report and was really excited…The amount of money is really reasonable.” He cited the need for additional grants. “I’m obviously concerned with costs,” “It’s a great blue print.”

For the past two weeks, Haldane students have used 30 iPads as part of a pilot project that High School Principal Brian Alm hopes will grow into an iPad for all students. Alm and math teacher Lou Sassano updated trustees on the project (15 teachers also have the devices) and both described it as highly successful with even greater potential. Sassano is using the iPads in his business math class. “The enthusiasm and excitement is unbelievable,” he said.  A big advantage he sees is extra time for students to do their work. He said that in the past students lost a lot of time going to the computer lab to log on to websites.  He also said the iPad’s visualization helps students “get concepts they didn’t get before.”

Alm said that the device can prepare students for the 21st century work world with the trend towards more and more people working together but remotely over long distances. According to Alm, “In bad weather, with the students out of school – education would continue.”   Alm envisions each student eventually being responsible for their own iPad  “When you put technology in the hands of students, students can drive the learning.”

While enthused about increased use of the iPad, Alm said the idea can’t yet be sold on a cost savings basis.” We’re not quite there yet,” he said, comparing it to Netbook laptops and even textbooks.  Alm said one real advantage iPads offer to classroom teachers is that unlike laptops students cannot hide behind them – greatly increasing teacher eye contact with students.