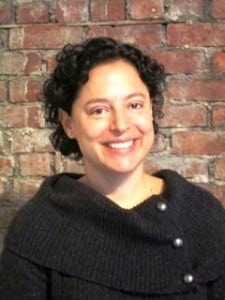 When you hear the word improv do you think of a can you top this free-for-all in a jousting match with an underlying panic about coming up with something funny?  Diana Hird wants to put those notions to rest.  Hird, a former corporate lawyer turned actress turned corporate coach turned playwright (more on all this in a moment) is a proponent of another form of improv altogether — one more akin to the creation of impromptu theater in a constructive, supportive environment.

Hoping to encourage others to give this type of improv a try, Hird organized an inaugural session at The Living Room recently and brought in an expert, Michael Rock, who has over 20 years of experience teaching acting and improv at places like Second City, New York University, and Marymount Manhattan College. Hird hopes that enough of the first-timers enjoyed the experience so much that they will wish to make the sessions ongoing. 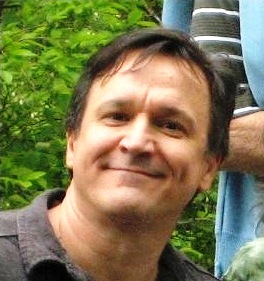 Rock’s advance description of his classes dubbed them “fun, supportive and relaxed and filled with teamwork, spontaneity and supportive playfulness.”  His website very accurately described what ensued at the actual session:

A typical session begins with several group games or exercises with everyone working together to develop a sense of teamwork and to get the mind and body activated. Then we usually do several exercises in smaller groups, all working simultaneously on a given improv skill.  After each activity there is a moment for brief feedback and questions and then we move on.  In the last half hour or so, we usually do a scene or game with 2, 3 or 4 people while the rest of the class watches. All feedback is positive and supportive.  Each exercise builds on previous exercises so you never feel like you’re thrown into something for which you are not prepared.  There are a lot of smiles and laughter although the purpose of the class is not to be funny, but to be spontaneous and collaborative.

Hird says the sessions work optimally with 20 or so participants; at this first one there were 10, which seemed to work well too. No one save Hird had taken an improv class previously.  Rock spoke to the group before beginning: “Improv is a fun way to learn to work with other people, and also to trust your ideas — often the first one.  Most of us haven’t really been spontaneous since age six or eight.  In improv you act before you think.  The goal is to feel safe, but not necessarily always comfortable.  What we’re creating here is all fiction, not real to you, but real to humanity.” 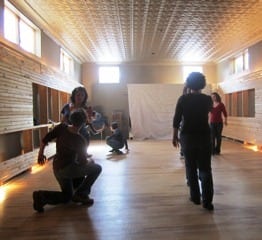 Participants engrossed in the "mirror" exercise

With that, the exercises began, starting with some energy building circle warm-ups as participants “threw” forces of energy around and across the circle in every which way both physically and vocally.  Those “I feel awkward” barriers began to break down while energy levels amped up.  Rock then had participants pair off and perform a hand-mirroring leader/follower exercise. Trading off, one person extended an arm and held a palm out and the other placed their palm across, about six inches away.  The leader then guided the follower, whose goal it was to keep the same distance while moving and following the leader.  Leader and follower then switched and then pairs broke up and formed new pairs, performing the same exercise.  “Let the partnership be what it wants to be,” said Rock, adding “the concept is to help your partner succeed. Lead the follower the way they want to be led.”

At the finish of the exercise, Rock asked the participants whether they preferred following to leading or vice versa; atypically, everybody expressed a preference for following — usually there is more of a split.  Rock then told a story of conducting this exercise at a college, where college students worked with younger kids from a homeless shelter.  The same question was posed to the kids, and all preferred to lead, Rock surmising this was “because they had no control, no power in their lives.”

Other exercises followed, all designed to foster cooperation, observation and the unleashing of first impulses without self-censorship.  The workshop concluded with something called “Finish the Sentence” wherein groups of three formed a row and were watched by the rest of the class.  The person in the middle had to repeat a short phrase, filling in one blank word in rapid-fire repetitions. The phrase could be nonsensical, the goal being freeing up the mind, not “coherent” thought.  Those along side had to mimic the body language of the person in the middle, and also immediately tap the shoulder of the sentence-maker whenever it was perceived that s/he was faltering. The shoulder-tapper then immediately took the place of the sentence-maker and the exercise continued.  The goal was once again empathy, awareness and elasticity.   Three sets of trios took to the mock stage and brought the exercise vividly to life, and with that, the session ended. 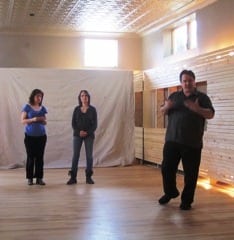 Rock conducts these workshops for all sorts of groups.  His mainstays used to be actors, but now he works more frequently with people from all walks of life, just seeking enjoyment from the classes.  He also conducts workshops in corporate settings, where, he says, the defenses are greater, but the gratification in breaking them down is extremely rewarding.

It was through the corporate role playing and facilitator work that Rock and Hird first met.  Hird had been a lawyer at a large firm.  When she paid off all her student loans, she got re-bitten by the acting bug she had put to the side years before, and she started studying again. At an audition with a company doing corporate training, “I was by far the least experienced actor there, but the reason I got hired was I know how people behave in the business world.  I could create scenarios.”  This segued into becoming a coach and eventually into developing her own instructional designs for coaching programs.

She sees a real need for them, calling law school, for example, really academic, with not enough training in how to work with people. “After the acting training I learned how important it was to have relationships with people.  Lots of lawyers, IT people, bankers, live in a technical world and they hit a point where they feel they don’t know how to talk to people higher up — they’re not used to giving a point of view, and as they rise, they are suddenly expected to.  Some of the coaching works on being permitted to have a point of view.” Other coaching involves dealing with difficult clients, “They are told the client is God because the client brings in money, but you also have to counsel a client and perhaps mold them into changing their view on something.” 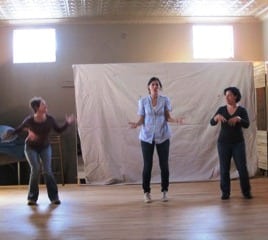 In the midst of the "Finish The Sentence" improv

An example of such a program conducted at an investment bank: “We would work in groups of five and would discuss something happening in working life which didn’t go well.  They would tell me about another person with whom they had conflict; I would ask questions. I would then play that other person, and we would have a ‘difficult conversation,’ held in front of the other four colleagues, where they would try to achieve their goal.  I listened to what they were saying but also saw what their problem in communicating was.  Inevitably they would say ‘Oh my god, you are so much like my boss’ or something of the kind.  In a debriefing we would discuss underlying attitudes they didn’t know they had. ‘Did you know that you winced when you said ….?” Hird calls it very similar to playwriting: “You’re creating a scene where two characters have an objective and an obstacle.”  Hird knows of which she speaks, having written a short play which won best play and director (who was Michael Rock) at the 2007 Aery Theater One-Act Festival.

Hird, mother of a two-year-old girl other focus has once again combined disciplines in her newest endeavor: after attending a lot of children’s theater, she decided to try her hand at it, and has co-written her first piece — a musical, no less — The Bluebird, which had its premiere at The Living Room on March 24 and 25.

In the meantime, there are the improv classes she hopes to have more of.  In answer to the question ‘What might I gain by studying improv?’ Rock’s website gives this reply:

Oh my, the list is long.   It can improve your communication skills, collaboration skills, playfulness and creativity. It can help you tap into your imagination. It can make you more comfortable with giving presentations or just being in unfamiliar situations.  It can help your writing.  It can help your public speaking.  It can help with listening skills and make you a better conversationalist.  It can increase your energy and clear your mind.  It’s great for entertaining the children in your life.  It can be useful in ways that are completely unique to you. The possibilities are almost limitless.

If you are interested in attending a future improv class, simply send Diana Hird an email at [email protected]
Photos by A.Rooney, except as noted

One thought on “The Limitless Possibilities of Improv”