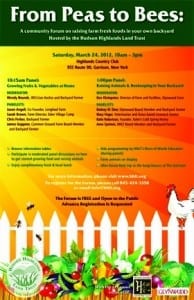 From Peas to Bees –Worms, Too

With a handful of tools, seeds or seedlings, and compost, those with visions of home-grown vegetables and fruit can turn dreams into reality, an eager audience learned last Saturday. Add a few chickens and the possibilities expand to include fresh eggs. And there’s always the option of honey or goat’s-milk, too. The concept of raising food at home took center stage at the Hudson Highlands Land Trust’s “From Peas to Bees – a Community Forum on Raising Farm-Fresh Foods in Your Own Backyard,” which drew 125 attendees March 24. The free program, held at the Highlands Country Club on Route 9D, featured 10 “sustainability” advocates with varying degrees of experience but a common devotion to the idea and ideals of small-scale agriculture. As a bonus, the agenda included an optional field trip – really – to a farm-in-the-making at the Garrison Country Club, not far from the Highlands club. 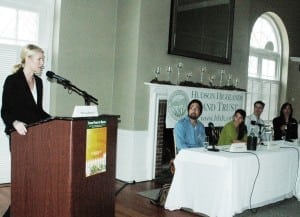 “Small farms can even be backyards,” said Ken Kleinpeter, director of the farm and facilities at Glynwood Farms, succinctly summing up the day’s theme. Divided into two panels, the speakers addressed issues of “Growing Fruits and Vegetables at Home” and “Raising Animals and Bee-Keeping in Your Backyard.”  Members of the fruit and vegetable panel advised aspiring green-thumbers to keep it simple, at least initially. “You don’t need to say, ‘Oh My God: I’ve got to do these 10 things,” said James Geppner, whose Cold Spring backyard harbors fruit bushes and raised vegetable beds, including a “winter garden.” Although he has gardened for 10 or 11 years, “I’m really like an ambitious novice,” he said. Moderator Wendy Bounds, an author, Wall Street Journal staffer and backyard vegetable gardener, suggested that by beginning with “earth pots and containers, you don’t have to do a big dig,” another plus for neophytes. 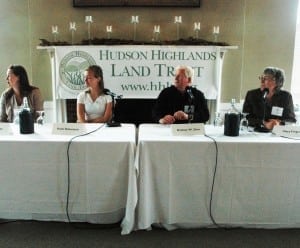 On the fundamental question of whether to use seed or seedlings to begin a vegetable patch, Geppner pointed out that the more mature the plant, the stronger it is. Chris Ferber, who has grown fruit and raised poultry for 35 years, added that some crops may be better to start as seeds than others, a factor gardeners should consider. The panel recommended that gardeners concentrate on plants relatively easy to grow in the Hudson Valley. As examples they cited lettuce, tomatoes, carrots, turnips, peas, peppers, onions, blueberries, strawberries, currants, blackberries, arugula, spinach, broccoli rabe, and squash.

To discourage weeds, “try not to let your lawn go to seed” if it is near a vegetable patch, use mulch to thwart weeds, “and get into the Zen of weeding,” said Jason Angell. A lecturer in political science at City University of New York, he is “trying to build a sustainable farm right down the road,” Longhaul Farm.  “Think of weeds as a contribution to your compost pile,” he added.

Indeed, compost dominated much of the panel’s discussion. “I’d like to make a strong pitch for compost,” Geppner said. “Composting is probably the best thing you can do as an individual for the sustainability of the planet.”

“Focusing on your soil is what is going to make the biggest difference. Give your soil this extra boost” through composting and strategic use of ground cover, such as vetch, said Sarah Brown, farm director of Eden Village Camp, who lived in an “eco-village” in Scotland and then for five years traveled as an itinerant organic farmer, working on crews and as a manager in Michigan, Connecticut, and California as well as the Hudson Valley. 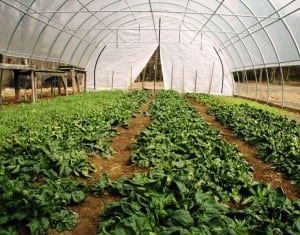 The winter garden at The Garrison

“A healthy soil creates healthy plants,” Angell agreed. “Keep piling composting into your soil.” Ferber explained that by dumping enough grass clippings into the compost, “you’ll start to get a ‘hot’ compost, which will kill all the weeds.”  Beyond that, ingredients can vary. “People have really different ideas about what should go into a compost pile,” Brown said. “I would say experiment.”

“We use almost anything we can get our hands on,” Angell observed.   Compost often consists of fruit and vegetable stalks, non-meat leftovers starting to molder in the back of a refrigerator, peel and scrapings, raked leaves, lawn trimmings, and similar detritus. “You’re taking all the things that would’ve gone into a waste heap and turning them into something productive,” Angell said. When feeding the compost, don’t hold the worms, either, said Bounds and Brown. Bounds noted that she kept an indoor composting tub to which she added worms, who loved it and never crawled out into her house. “Worms make some of the best compost there is,” Bounds said. Brown added that worms ordered from farm suppliers online may not be indigenous to the Hudson Valley and should never be used outdoors.

Panelists also sang the praises of raised beds –- garden plots raised off the ground several inches. “I put my plants extremely close together and get a lot of growth out of extremely small beds,” Geppner said. He likewise described his experiences with winter gardening: starting new crops outdoors in late summer or early fall in raised beds protected by a “row cover,” which looks like a bed sheet and forms a roof over the plants. The effect “is like a rain forest,” with vegetables growing under shelter even in cold weather, Geppner said. At harvest time, “you’ll have fresh salad from mid-March to early June. It’s extremely rewarding and even with a small plot you get a lot.” Moreover, Angell said, “this is all incredibly low-tech.”

A few other gardening tips

Some of Katie Robertson’s bees

From bees to goats

The afternoon panel took the discussion from plants to animals. The youngest speaker, 16-year-old Katie Robertson, raises bees at her home and markets the results as Katie’s Cold Spring Honey. She said she started bee-keeping 10 years ago “and fell in love with it. It’s very fun and it’s easy to keep bees. But it takes a lot of time. You have to tend to them.” A display table featured some of her bees in a portable hive. “You have to know your bees to know how much honey you can get from them,” she said.

Rodney Dow, who taught livestock care, farming, and marketing as a professor of agriculture at the State University of New York-Farmingdale and now serves on the Glynwood board, also began keeping bees as a child, in 1960. He described honey as “one of the most balanced foods in the world” but said that to produce it, bees need a diversity of pollen. He advised potential bee-keepers to begin by apprenticing with an experienced bee-keeper. Also, he cautioned, “if you start keeping bees, you’re going to get stung. I’ve been stung thousands of times and I still get stung.”

From bees, the panel ranged to chickens, as chicks from Horseman’s Trail Farm peeped in a display in the back of the hall. Kleinpeter, panel moderator, urged novices to start with hens for laying eggs (as opposed to chickens raised for meat). Five or six hens can survive in a simple coop in a yard all winter with only a light bulb for heat, he said. And the eggs are delectable. 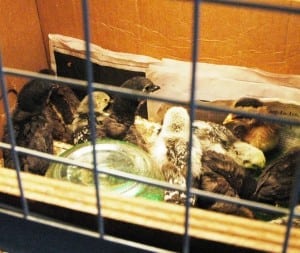 Mary Finger, owner of Horseman’s Trail Farm, a veterinarian as well as a producer of grass-fed livestock  who raises other animals as well, pointed out that chickens eat just about anything, including no-longer-identifiable leftovers from the refrigerator and bugs and worms in the yard. “They don’t care what it is,” Kleinpeter concurred. “You can save a lot of money by feeding them your food waste.” But he advised backyard chicken-owners to supplement hens’ diets with a prepared, commercial feed. He also cautioned that raising food at home doesn’t necessarily equate to household savings, he cautioned. “You’re not going to make it cheaper, but you’re going to make it a lot, lot better.”

The panelists said that raising meat-chickens is the next step up and gets more complicated because the fowl must be processed –- killed, if not on site, then through arrangements with a slaughterhouse. Yet even egg-layers often get killed, when they stop producing abundant eggs and age, while their meat remains tasty. “That’s going make a good soup,” Dow said. And with the soup-pot looming over the hen yard, “don’t start naming them as your friends,” he said.

Goats followed on the agenda. Kleinpeter said they provide the simplest way to get fresh milk at home. “Goats are a very easy animal train” and to milk by hand. “And the milk is quite good,” he said. Panelist Anne Symmes, a landscape designer with three goats and seven hens, added that goats “do a really good job” of destroying weeds, including poison ivy. “Grass is the last thing they want to eat. We’ve been really pleased with that they’ve been able to accomplish on our property.” But they can destroy trees, too, and have a mischievous streak, as well as great jumping ability, she said. “If you happen to have an athletic goat, you have to be prepared.” Nonetheless, she said of goat-keeping, “if we can do it, you can do it” and for all the trouble goats cause, “they are just so much fun!”

Dow offered a few closing words of wisdom: Because of the commitment required, “if you’re raising chickens, raising bees, raising goats, it’s very important that your partner is in on it.” 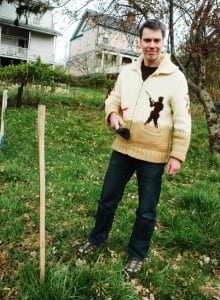 Jaqui Gueft, who has a small farm in Kent Lakes, considered herself fairly knowledgeable already but said “I learned plenty today.”

James Hartford, a Cold Spring architect, said the program had inspired him to think seriously about adding a few chickens to his Furnace Street yard.

Mary Ann Ebner, who drove over from the west side of the Hudson, said that “as a novice container-gardener, I came away from the community forum with renewed inspiration. Though West Point may seem like a world away, backyard gardeners across the river appreciate many of the challenges faced by our Highlands neighbors,” including rocky conditions and bugs. “Connecting with such a vibrant and informed group of people planted great home-grown ideas,” she said.

After the indoor seminar, about 20 participants continued to The Garrison Country Club to view the “hoop houses,” tube-shaped greenhouses overseen by Brian Bergen, “the farmer” at The Garrison, as he put it. Inside one shelter, used as a winter garden, he grew spinach, wild arugula, several kinds of cress, onions, radicchio, and more. Beds of rich greens remained, including vibrant spinach. “That’s been here all winter. It’s problem-free in the winter” and can even survive if frozen, he said. Adjacent to the plant-filled greenhouse, he is constructing a new one, part of plans to expand some of the land at The Garrison into a real, working farm –- with pigs to come.
Photos by L.S.Armstrong

One thought on “Backyard Farming Can Succeed, Say Those Who Dared Try It”