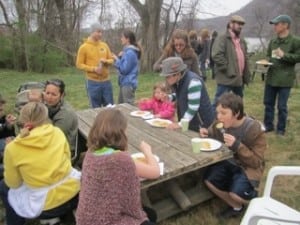 The task at hand: eating pancakes

For the 23rd  year in a row the Little Stony Point Citizens’ Association (LSPCA) invited folks in (out, in fact) to their annual Maple Syrup Day last Sunday, March 25.  As grey skies and temperatures in the 50s provided weather marginally more in the traditional vein for this time of the year, pancake-eaters and music-listeners gathered on the grounds of the Little Stony Caretaker’s house for some relaxed Sunday morning to afternoon socializing. 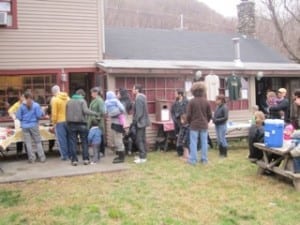 Worth the wait: lining up for pancakes at the Little Stony Maple Celebration

A constantly replenished line of hungry customers lay in wait for the griddled goods.  Nearby, a large evaporator container was kept at a roaring boil for hours, in a demonstration of how liquids drawn from the sugar maples are transformed into syrup.  Adjacent to the evaporator, Scott Graber, from New York State Parks and Recreation, was presiding over a table of goods, largely from the Hudson Valley Maple Farm, a program of New York States Parks operated through the Taconic Outdoor Education Center.  The Taconic Center’s John Stowell was there as well, and was set to demonstrate the tapping of tree later in the day. Although the warm temperatures over the winter made for a less than stellar maple-producing season, there was still an array of goods for sale, most made very locally, with some of the syrup tapped from trees directly across Route 9D from the Little Stony Point entrance.  Graber explained the differences between grades of syrup, with sap obtained later in the season being designated Dark Amber, and liquid tapped earlier as Medium Grade Amber.  There is a distinct difference in flavor, with the Dark Amber “more robust and maple-y,” according to Graber. 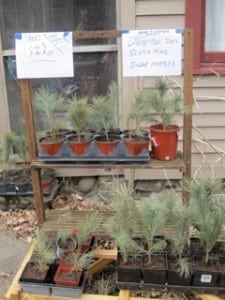 Trees, at the start of their lives.

Young trees, all native species, obtained from the Department of Environmental Conservation were offered for sale at a nominal cost; those not purchased will be planted at Little Stony.

As a steady stream of families and pancake-loving folks without children stopped by, they were entertained by music from Kathleen Pemble, The Hudson Highlands Pipes and Drums (fresh from Carnegie Hall!) and The Lonely.

For John Teagle, Little Stony’s caretaker for over three years, Maple Syrup Day is both a party and a way of sharing what’s new at Little Stony, which this year includes the extension of a new trail which runs from the end of Fair Street through to the Caretaker’s house mailbox, thereby eliminating the need for those heading to Little Stony on foot from Cold Spring village to walk along Route 9D, always busy with traffic. They also lobby for safety improvements, hoping for a crosswalk on 9D, lowered speed limits and safe hiking paths to and from Breakneck Ridge, further north. 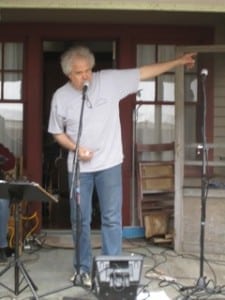 Teagle says the 25-acre park, which is part of the Hudson Highlands State Park, “gets used on the worst days of the year. People come to walk dogs, jog, hike, picnic and wade in the Hudson” (no out and out swimming is allowed.)  Visitors also arrive by boat, docking along the shores of the man-made beach.  Little Stony attracts visitors from around the world, according to Teagle, many of whom take the train up and use Little Stony as their entrance to the northern part of the highlands. 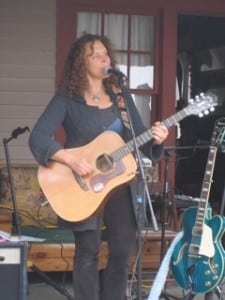 The LSPCA, which is “dedicated to keeping this park beautiful and accessible to the public,” was founded in 1989, and was the first of now over 30 “Friends” groups that work in association with the New York State Park system to keep beautiful areas open to the public. They will be hosting a number of other community events over the coming months, including the Hoot on the Hudson, a music festival which usually attracts about 20 bands, which takes place on the Sunday after Labor Day. 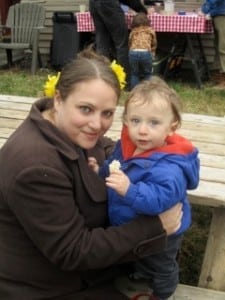 Pancakes can be a finger food.

There is a clean-up day scheduled for Sunday, April 22nd.  They will also be taking part in the Great Hudson River Sweep on June 2 as one of the clean-up sites in this year’s program, now sponsored by Riverkeeper.  Per their instructions, “On clean-up days, meet at the Caretaker’s House, 3011 Route 9D, Cold Spring, just north of the Fair Street intersection, or just come out to the beach (cross over the bridge to the Park, make a right and head toward the beach on the north side of the Point. Kids are encouraged to join in. Trash pickers, bags, buckets, water, coffee, refreshments and instructions will be provided. Bring gloves, shoes that won’t be punctured walking on devilheads, waders for those willing to join the kayakers out in the drink, and the expectation of a memorable time helping your community. Those who have chainsaws, portable sawz-alls, loppers, nippers, etc., are encouraged to bring them.” 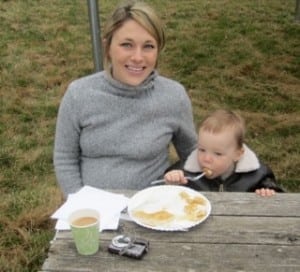 It doesn't take long to learn to love pancakes

If you would like to volunteer, please email Caretaker John Teagle at [email protected]
Photos by A.Rooney