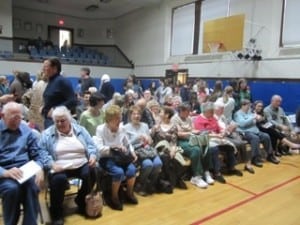 A contingent of local seniors were special guests at the Saturday matinee of 'Guys and Dolls' at Haldane.

At the Saturday matinee

A group of Philipstown seniors were special guests at Haldane High School’s Saturday matinee performance of Guys and Dolls.  The seniors, many of whom would have been old enough to have attended the original Broadway production, or the 1955 film starring Marlon Brando, Frank Sinatra, Jean Simmons and Vivian Blaine, appeared to enjoy the performance very much, joining in hearty applause at the curtain call. 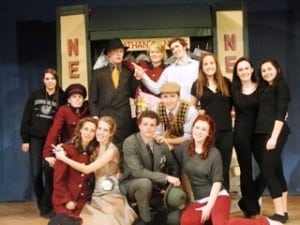 Meanwhile, a different group of seniors, those cast and crew members concluding their high school years at Haldane, gathered for a group photo after the final performance on Sunday afternoon.  Wistful and already nostalgic for what had just passed —as were their parents — they will have many such passages and transitions before they become the age of those senior citizens who watched them.
Photos by A.Rooney, except as noted