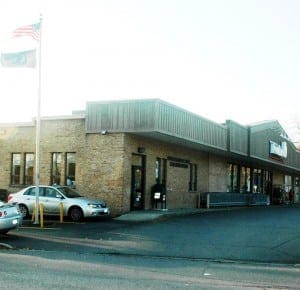 Foodtown owners want to expand the grocery into space used by the current post office (left).

Cold Spring ‘s Planning Board wants the Village Board to rezone an empty Marion Avenue residential lot for a post office –- a proposal vigorously rejected by nearby residents, who clashed Tuesday at a Village Board workshop with Mayor Seth Gallagher over village handling of  Foodtown expansion plans. The owner of the Foodtown Plaza, Constantine Serroukas, has promised to allow the grocery to take over space now occupied by the post office when the U.S. Postal Service lease expires. After a couple of extensions, the latest lease expires at the end of August. On the drawing boards since at least 2009, the grocery enlargement has sparked periodic arguments at village meetings. March 27 was no exception, but after 45 minutes of heated comments a glimmer of hope emerged — again in the shape of the redevelopment proposed for the old Butterfield Hospital property. Butterfield’s developer, Paul Guillaro, has expressed willingness to include the post office in his proposed complex across Chestnut Street from Foodtown but has encountered criticism of other elements of his plans.

View across "lot B" toward rear of Foodtown (Photo by M. Mell)

The latest debate arose over a March 19 letter in which the Planning Board asked the Village Board to rezone the vacant lot at the corner of Marion Avenue and Benedict Road to permit construction of a new post office there. Although it said it preferred to see the post office at Butterfield, the Planning Board raised doubts about the likelihood of that and said “the second best option would be to place the Post Office in the R-1 lot owned by the applicant — so-called Lot B — behind the [Foodtown] Plaza. Since maintaining the presence of the post office in our village is a primary concern of the Planning Board, we believe all options should be considered and none ruled out,” the letter stated. Written by Planning Board Chairman Joseph Barbaro, the letter explained that a three-member majority of the five-member Planning Board “believes rezoning Mr. Serroukas’ ‘Lot B’ is the better solution for maintaining this institution in our village. We invite the Village Board to agree with us and to enact the change” in zoning. That’s not likely to happen soon, Gallagher said. “We’re not there.” 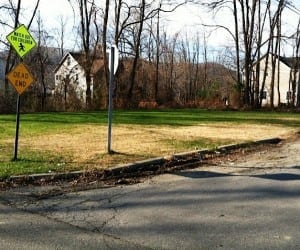 Lot B, seen from Marion Ave (Photo by K.E.Foley)

Responding to the Planning Board, Tom Campanile presented a letter from the newly formed Benedict Road and Marion Avenue Neighborhood Association. Dated March 27, that letter urged the Village Board “to either deny the change of use Foodtown’s management would require to use the existing post office space for a grocery store and/or encourage the post office to consider an alternative location within the village or greater Philipstown.” The letter criticized rezoning Lot B as “spot zoning” and said the residents “find this latest decision by some members of that [Planning] Board to be arbitrary, capricious, and out of order.”

“Let’s not railroad this thing through to benefit an out-of-town developer who screwed us 10 years ago” by telling Foodtown it could have the post office space, said Campanile, the association’s vice president. In comments at the meeting, members of the association also protested that while the Planning Board maintains that the Butterfield development should comport with the village’s new Comprehensive Plan, it does not demand that the Foodtown expansion do likewise. “You’re giving Mr. Guillaro a hell of a lawsuit: Comprehensive Plan for thee and not for me,” Campanile told the Village Board. The Comprehensive Plan proposes that the village improve the safety of the Foodtown area but also calls for keeping the post office in the village.

Gallagher said that the Planning Board members “are genuinely worried that we could lose the post office. It’s incredibly important to keep it for all the residents of the village and, actually, the town as well. To keep the post office in the village is a priority.” He disagreed that rezoning Lot B would constitute spot-zoning and read a New York State Department of State legal treatise defining spot-zoning as a zoning change that benefits a particular developer, to the detriment of the larger community. “Spot zoning is to basically enrich the developer,” Gallagher concluded. “We’re in the opposite situation” because preserving the post office would serve everyone. Moreover, “it’s our last [resort], to put the post office on that parcel,” Lot B, he said. 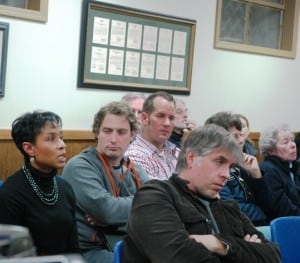 Janice Hogan, president of the residents’ association, said Gallagher had proposed use of Lot B for the post office three years ago. “I didn’t say that,” Gallagher answered. He said that the three years ago a proposal to use Lot B for parking arose but a neighborhood resident suggested putting the post office there instead. Hogan then accused Gallagher of having favored creation of a large lot, with some 55 parking spaces, on Lot B. Again, Gallagher objected. “I’m not going to give numbers [of spaces] for a parking lot. I said we have to consider parking,” he told Hogan. “I would like you to tell the truth.”

“If we get to tell the truth, this could get ugly!” Hogan replied, as the audience rumbled into low uproar.

“I said there is a need to figure out how to serve the broader community,” Gallagher continued.  “I have really made a huge effort to try to figure out other alternatives” for a post office site. “I’m here representing the entire village and need to take into account – yes – the residents there but also the residents of the entire village. And the post office is critical.”

Gordon Robertson, an ex-trustee, suggested the village government and residents “were being blackmailed” into approving the Foodtown expansion through fear of losing the post office. “In effect, we have no other option,” Gallagher concurred. “Where we are now is just trying to figure out how we keep the post office in Cold Spring. We’re looking at all alternatives,” he said. As for using Lot B for the post office, “I would prefer not to do that. I can think of better use of that piece of land and still accomplish what we want to, should the post office not go to Butterfield.”

Hogan asked if the Village Board was “definitely rejecting” the rezoning request. “No, because we’re not taking it up right now” and the process will continue “for a little while, at least,” Gallagher said, though he acknowledged “I’d love for it to go away.” Trustee Bruce Campbell sympathized with the residents concerns about putting the post office on Lot B. “I definitely wouldn’t want that over where I live,” he said.

The mayor proposed that Ted Fink, the planner advising the village on the Butterfield project, review the study and help deal with the issues; the residents seemed amenable. Gallagher likewise urged that questions about the Butterfield development be resolved, since the faster “we can have an arrangement with the developer, the sooner they can sign a contract with the post office.”

Matt Moran, a representative of Guillaro’s firm, said Guillaro “is open to all ideas,” including focusing on the post office component of the complex immediately to “get that building moving more quickly.”

“We’ll work out the details and do what we have to do,” the mayor said. “We appreciate what you’re trying to do,” Campanile assured Gallagher. “We don’t want this to be contentious because we should all be yelling at Serroukas right now.”
Photos by L.S.Armstrong, except as noted