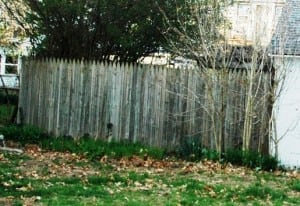 Many current fences considered in violation of code

Cold Spring residents verbally fenced about fences at a public hearing Tuesday (March 27) on a proposed change in the village legal code to allow a 6-foot fence on one side of a residential back yard. Currently, village zoning law bans fences higher than four feet unless the property owners have obtained a variance from the Zoning Board of Appeals (ZBA). Nonetheless, as participants at the public hearing attested, numerous fences higher than six feet exist throughout the village. Held by the Village Board, which has considered the fence issue three times in two years, the hearing occurred on a night when the board also briefly discussed the village’s legal representation and got a report on a method for protecting village government building roofs.

ZBA Chairman Donald MacDonald, who has encouraged the Village Board to make the code change, explained that if a fence existed before 1968 when the village zoning law took effect, it is legal as a “pre-existing, non-conforming” structure. “The ones built after that were illegal from the day they were built,” he said.  “The urban myth in our village is that you can replace” fences from pre-code days if they fall down, whereas “a strict reading of the code would say if you went and replaced the fence, it’s illegal,” he added. Finally, trying to decide which household deserves a tall fence and receives a variance puts the ZBA in a stressful position that can “grind a board down,” he told the mayor and trustees. The ZBA tends to grant variances only when a residential property borders a commercial site or institution. “The ZBA could issue variances [routinely] but we’d feel then that we’re circumventing the law,” ZBA member Richard Turner remarked.

A variety of fences stand in Cold Spring yards.

The hearing drew favorable comments that the law would help neighbors and bring the erring into compliance; it also sparked criticism that yards could be screened by plants. Some proponents of the change also tempered their enthusiasm, suggesting that basic standards on fence design and aesthetics might be appropriate. Mayor Seth Gallagher opened the debate by noting that the last time the Village Board considered the zoning change, in July 2011, the measure failed on a 2 to 2 vote. “I think it’s time we consider this again,” he said. Given all the legally questionable fences, he said, the present law poses problems for the building inspector, who must enforce the code, and frustrates residents who try to obey it, cannot obtain variances, and watch new, tall fences get erected by residents who don’t ask permission.  “The thing is people who want these fences are putting them up anyway,” Gallagher said. The mayor also acknowledged a long-standing local government attitude of “not wanting to enforce” the high-fence prohibition.

Thomas Ambrose, who has sought a tall fence, said he has counted 85 Cold Spring fences higher than four feet. “I doubt that many people are even aware” of them, he said.

“Eight-five fences across the village does sound like a public referendum on 6-foot fences,” said Kathleen Foley, a member of the Historic District Review Board. She pointed out that she received a variance for a taller fence, because her yard borders a nursery school, and that the process worked well.

The number of tall fences already out there, “kind of speaks for itself,” said Tony Bardes, a resident and president of Citizens of Philipstown.Org. He humorously suggested that fences could prevent someone from having to view such shocking sights as him sunbathing.  “Fences are a good thing, they really are,” as long as they fit in with the character of the village, Bardes said.

Tom Rolston, owner of the Depot Restaurant, who lives above the commercial strip on Chestnut Street, opposed the change in law. Rolston said he had planted trees and other greenery to achieve privacy and advocated others do the same – a suggestion rejected by Ambrose, who said upkeep of trees and hedges might only become another source of contention between neighbors.  “The village of Cold Spring is unique,” Rolston said. “That’s why we all live here. The viewshed would be ruined by a 6-foot fence. This law is bad law because it mentions nothing about what type of fence” could be installed.

Gallagher said that the board could revise the draft law to allow for fence-design reviews. Trustee J. Ralph Falloon wondered if the new law would give the building inspector “the right to go around to these 85 houses and give them violation notices. If that’s the case, I want nothing to do with it.”

“You’re in violation now if you’ve got it” – a tall fence installed without a variance, Gallagher replied. If the code changes, “you’re giving somebody more opportunity to comply with the law. We’re actually trying to make it easier [for residents] but have some control.”

MacDonald and at least one other speaker advised that the board also could provide an “amnesty” and suggested options:  One would be to allow illegal fences to remain, but not be replaced if they fall down. Another option would be to provide a several-year grace period to those who put up fences illegally, giving them time to either lower the fence or remove it (steps seemingly necessary if the code changes to allow 6-foot fences, but only on one side of a yard, and a homeowner had enclosed his property on three or four sides). After the public hearing closed, the Village Board took no action. Gallagher asked the trustees to consider ways to improve the draft law before revisiting it in the near future.

Newly re-elected Trustee Chuck Hustis claimed his colleagues’ attention on several questions. Stating that “we need to shake things up a little,” he proposed that the village government seek bids from law firms to serve as the village’s legal counsel, with the possibility of replacing current Village Attorney Stephen Gaba and his law firm, Drake Loeb Heller Kennedy Gogerty Gaba & Rudd, in another year. Gallagher said that while “you do look at the price,” hiring lawyers is not a matter of accepting the lowest bid, because village officials must have trust in the lawyer and his or her competence. He said Gaba had saved the village money by handling litigation directly, instead of farming it out to more expensive firms. “I think he’s served the village well,” the mayor said. “I’d be against that [switch] because I’m satisfied.”

Falloon suggested that they could explore hiring a different firm but also might pare costs by limiting who in the village government can contact Gaba and thus run up expenses. Gallagher suggested Falloon discuss the idea with Gaba, who does not charge for inquiries about billing.

Hustis also suggested that the board call a voter referendum for 2013 on construction of a new firehouse on Main Street. Gallagher answered that they needed a fully developed plan before setting a referendum, and Hustis concurred.

Hustis also reported on costs submitted by a company for coating the roofs of the sewage treatment plant, firehouse, and village hall to protect and seal them, promoting energy savings. According to his figures, prices for the work range from $11,995 to $15,300 for the sewage plant and $23,843 to $35,143 for the firehouse; the cost for the village hall would be $23,795.  Trustee Bruce Campbell asked for a breakdown on how much of the company’s price involved labor, as village employees might provide it and reduce the overall expense. Gallagher asked for information on the amount of expected energy savings and how long the current roofs will last, without the coatings. Hustis responded that he expected they could save $4,000 to $6,000 on electricity at the waste water plant and also reduce costs of lights on Main Street. Gallagher observed that much of the cost of electricity at the sewage plant comes from necessary machinery and that streetlights on Main would not be affected by the coating project. Hustis then agreed to clarify the projected energy savings from the coating work as well as determine the labor component in the prices.
Photos by L.S.Armstrong