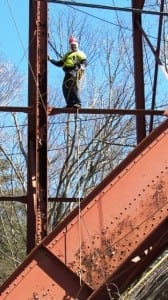 Rust is the enemy

Bridges have an inherent beauty that makes them one of the most awe-inspiring structures built by humans. But even they need an occasional facelift – and the Indian Brook Bridge on Route 9D between Cold Spring and Garrison is now in the midst of one. In a project that started last November and will not be complete until July, a crew of up to 25 workers, mainly members of Structural Steel and Bridge Painters of Greater New York Local 806, is doing major maintenance on the bridge in order to preserve its structural integrity.

The enemy is rust.

Jon Morucci, quality control/health and safety officer on the project, explained how the bridge is being refurbished. “An abrasive blast is used first to remove the existing coating,” he said. “It ends up looking brand new – white, stripped metal with all the impurities removed.” The entire structure will then be spray-coated three times – a separate layer each of zinc, epoxy and urethane.  This is not your average “I think I’ll paint the shed this weekend” kind of project. Morucci estimates about 3,000 gallons of protective coating will be used. He said bridges generally need to be redone every 10-15 years.

Safety is an obvious concern on the project as workers carry out their tasks, sometimes as much as 150 feet above the ground.  Morucci’s role is to recognize hazards and make the changes necessary to alleviate them; a job he has been doing since 1997. 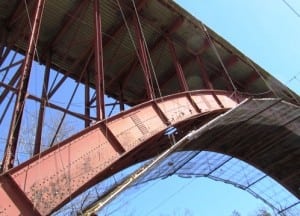 Indian Brook Bridge viewed from below

The hundreds of drivers who cross Indian Brook daily can see neither the bridge itself nor the work being done on the massive, ruddy-colored structure below the road’s surface. The only hints that a project is underway are the bright orange pylons along both sides of the bridge, and at times a worker or two gazing over the railing at their colleagues below. The project is being carried out by Liberty Maintenance Inc., a company based in Youngstown, Ohio. They completed a similar, though much smaller project, earlier this year on the Foundry Brook Bridge on Route 9D at the southern boundary of Cold Spring. That work took only two weeks.

While Indian Brook is a much larger undertaking than Foundry Brook, it pales in comparison to the other bridges the company has worked on in New York City. Consider the Verrazano Bridge – the world’s largest suspension bridge when it was competed in 1964 – with towers that rise some 700 feet and a center span of 4,260 feet.  Morucci said the company has done work on many other New York bridges, including the Triboro, Goethals, Robert Moses, and Roosevelt Island bridges.

To see the Indian Brook Bridge in all its glory, turn off Route 9D at Indian Brook road and follow it around to the bridge. Work is carried out on weekdays making the area around the bridge quite congested – but no work is being done on the weekends.
Photos by M.Turton