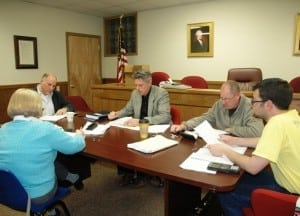 Cold Spring property owners face a village tax increase of almost 2 percent or nearly as much as the allowable state limit, under a tentative $2,652,554 general budget reviewed by the Village Board Monday night (April 2).  According to the draft, for fiscal 2012-13, sewer fees also would increase, to provide for ongoing upgrades to the system. Meeting in the first of two consecutive evenings, the board for the first time included Trustee Matt Francisco, sworn in earlier in the day along with re-elected Trustee Charles Hustis, both with a two-year term of office.

“Each year it goes up a little bit more,” Gallagher said of the firefighter pension total. The pension kitty “is predicated on a 6 percent return on investments” a level not recently realized, he said. Nonetheless, because of the increased share allocated to other local municipalities, under the tentative budget the portion of the firefighter pension paid by Cold Spring taxpayers would decrease by $2,165 from fiscal 2011-12.

The mayor, who also serves as the village’s budget officer, pointed out that it’s not just firefighter pension costs that have risen. “All the retirements have gone up … quite a bit, $10,000 in one year,” in the case of village personnel, he said. “It doesn’t take very much for these increases to have an effect on the budget.” The 2011-12 general fund budget allocated $61,500 for general retirement costs and $38,000 for police retirements. In fiscal 2012-13, the draft budget sets those at $71,000 and $40,000, respectively.

Infrastructure expenses drive many costs in the sewer (waste-water) department and the water department, according to their tentative fund budgets, handled separately from the general fund and not dependent on taxes. For fiscal 2010-11, the village spent more than $45,000 on necessary flow-monitoring and pressure-grouting to correct “inflow and infiltration” problems of water seeping into the sewer system from odd sources (such as storm water run-off or, possibly, illegal hook-ups). By the end of the present fiscal year, Cold Spring expects to have spent another $35,330 on “I and I” correction and Greg Phillips, superintendent of the water and sewer departments, informed that Village Board in a memo that “it seems another $40,000-$50,000, minimally, will be spent in the new fiscal year.” However, unless the village wants to risk shelling out almost $40,000 per day in fines for I and I infractions, it has little choice but to fix the problem, Phillips indicated. His memo quoted from a September 2006 imperative from the New York State Department of Environmental Conservation (DEC) that expressed “major concerns regarding the sewer collection system that must be addressed on a priority basis” to end the I and I problems, which can overwhelm the waste-water treatment plant and result in effluent containing more solids than permitted in the fluid discharged into the Hudson River. The letter warned that “pro-active work in correcting this problem may preclude the need for formal enforcement of the Environmental Conservation Law [ECL]. Violations are subject to penalties of $37,500 per day” each.

The mayor echoed Phillips’ written comment that Cold Spring has pursued solutions to the problem since fall 2006. “We have been pro-active,” Gallagher said, pointing to Phillips’ memo. “This is a reminder that the village needs the money to do this priority work.” Along with the I and I situation, the sewer department needs an aeration system upgrade, at a likely cost of $342,000 to $387,000 –- atop $33,000 already being disbursed for design drawings and preliminary efforts. “Our current sewer fund balance is not sufficient to cover those costs,” Phillips stated. However, he continued, supplying a bit of good news, “the upside will be an estimated savings electricity of $15,000 for future budget years.” To pay for the aeration improvements, the village will probably have to resort to bonding, Gallagher said.

Phillips’ memo mentioned the importance of maintaining adequate account balances and proposed that the village raise sewer fees in 2012-13. “A suggested increase of $2 per unit per quarter,” or $8 yearly, “would net the fund with an approximate $10,000 to work with,” he wrote.

“It certainly makes sense to me,” the mayor concurred. “The [sewer] budget I propose includes those monies in it. It’s good to keep things in perspective” -– a small fee increase as opposed to such outlays as staggering daily fines for uncorrected I and I.

At $465,600, the draft sewer fund (sewer department budget) for fiscal 2012-13 is down by $19,800 from the fiscal 2011-12 final budget. The draft water fund (clean tap water system) budget would be $813,200, a decrease from the $857,850 budgeted for fiscal 2011-12. Both water and sewer fund budgets anticipate rolling unused money from fiscal 2011-12 into the final 2012-13 budgets. The water department draft budget foresees expenses for a new master control panel for the fresh-water treatment plant and a mapping project involving the village’s reservoirs.
Photo by L.S.Armstrong