Rumors turned to reality at the Cold Spring Planning Board last Tuesday evening (April 3)  as Kenny Elmes, owner of the Elmesco Citgo service station on Chestnut Street (Route 9D), formally introduced his plans to convert his 25-year-old car repair operation into a combined gas pump-convenience store-Dunkin’ Donuts franchise. Elmes, in a brief statement, told the Planning Board members his repair operation was no longer a sustainable business and after exploring his options had found the new plan the best course. “Short of getting rid of it, this is the most practical thing to do and I also think it will be good for the town,” he said quietly as an audience of over 30 people, including many operators of local retail shops, sat in skeptical silence in the VFW Hall on Kemble Avenue.

The meeting, the regular monthly session of the Planning Board, was intended only as an introductory preview of the Elmesco “change of use” plans.  Chairman Joseph Barbaro scheduled a workshop to begin formally reviewing the details of the plans for Tuesday, April 17 at 7:30 p.m.  He told the audience, “You will get a chance to speak down the road,” at a public hearing. In the meantime Barbaro encouraged people to write to the Planning Board to add to the board’s perspective on the application. 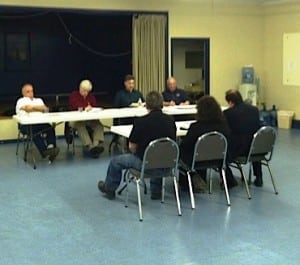 Elmes, his wife and architect Lezott appearing before Planning Board

Ronald Lezott, of gk+a Architects in Rutherford, N.J., representing Dunkin’ Donuts, summarized the prospective Elmesco plans for the board. Standing before an easel with series of schematic drawings, he explained that the existing building “would be completely redone,” with red brick, “consistent with the area,” and a stucco finish with a red brick tower atop the building. A single Dunkin’ Donuts sign would adorn the front door entrance and a franchise mural will be in the window of the left side of the structure, which will house the doughnut operation. The convenience store would be to the right as you face the structure.

Elmes explained that the two stores would be separate operations, both renting from him, while he retained the gasoline business. He said he needed both operations to make the plan economically feasible. He later also said the financial arrangements with Dunkin’ Donuts made them the acceptable partner as opposed to a local or non-franchise business.

Another significant change to the building would be the installation of a window, signage and lighting in the rear to accommodate drive-thru service. Lezott said this feature was part of an industry trend to meet consumer demand for convenience in such sales. Board Member Dick Weissbrod said he believed that a drive-thru was contrary to the recommendations in the village’s Comprehensive Plan. “That’s going to be an issue,” he said.

Lezott was asked several times about parking spaces. He explained that because the two facilities will not have any seating, there was technically no requirement for parking spaces. However, he said there would be nine designated spaces essentially in the location of current service station parking on the right side of the building. He further emphasized that the combination of a drive-thru and customers stopping for gas and patronizing one of the stores would alleviate the demand for parking.

Asked by Weissbrod about the Dunkin’ Donuts store model choices, Lezott said the current proposal was a “change from the typical store” because the developers recognized the proposed plan also comes under the jurisdiction of the village’s Historic District Review Board, which must issue a “certificate of appropriateness” as part of the overall approval process. Lezott said the company was familiar with historic district reviews and was open to changes and suggestions for the look of the building. Usually the Planning Board awaits a ruling from the Historic District Review Board before rendering its own final decision.

In response to Board Member Parge Sgro, Lezott said there would be food preparation and cooking on the premises for items such as breakfast and lunch sandwiches.  The doughnuts, however, would be delivered daily from a New Windsor, N.Y., location. Elmes said he assumed the delivery would be early in the morning from a box truck, “not a tractor trailer.”

Part of the audience for the Planning Board meeting

Barbaro indicated that the application would also require a State Environmental Quality Review (SEQR).  That process could involve other agencies of government such as the Putnam County Health Department, the state Department of Transportation (9D is a state road) as well as the state Department of Environmental Conservation. In the Butterfield development process, the Village Board of Trustees declared itself the “lead agency” of the SEQR review due to what they believe is the impact of that project on village life.

Sgro reminded the applicants the board would want to see a more detailed site plan, and would want to better understand issues such as the electrical hookups needed, sewer discharge plans and the arrangements for food preparation. Board members also expressed interest in further exploring lighting, parking and traffic flow in and out of the facility.

While audience members did not speak at the meeting, there was plenty of informal comment afterwards and later on Main Street. The principal objections of other business people, many of whom are empathetic about the economic issues confronting Elmes, is not more competition, but rather that a national franchise establishment represents a break with the concept of village character and uniqueness of place, which they see as the added value proposition in Cold Spring for both homeowners and visitors  — and  that acceptance of a franchise will inevitably attract other similar operations, creating a potentially different community and business landscape altogether.

Clearly there are a number of legal and policy questions involving property rights, zoning law, and the Comprehensive Plan that will require further exploration.
Photos by K.E.Foley

8 thoughts on “Dunkin’ Donut Proposal Comes Before Planning Board”