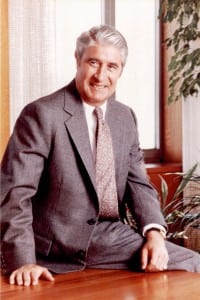 I have been a staunch admirer of Julie Heckert, Manager and Ticket Office Extraordinaire of the Garrison Depot Theatre.   I have allowed her exquisite voice to envelope me when my husband and I attended concerts or performances.   So, I was very sad to learn that Julie’s father had died last week.

My friend filled me in with the details of the funeral arrangements at West Point because apparently, Julie’s father had graduated from West Point and served in Korea…and my friend went on, “he became CEO of Tishman Realty.”    “Hold the phone!”  I asked, “What was Julie’s father’s name?” “Jim Endler” The sadness increased 100-fold.  All these years, he lived in Garrison while I lived in Cold Spring. Our paths didn’t cross and I never told him how much he meant to the visually challenged community in the Greater New York area.

In the 1970’s my late husband, Jim Jones, who had been working in Wall Street, became blind at the age of 32 years, thought to be related to Marfan Syndrome diagnosed years later.  He was an avid newspaper reader and arranged for a cadre of readers to read various newspapers to him. We were made aware of radio reading services popping up around the United States.  New York did not have such a service.   Since, we could not convince the established, institutional charities for the blind that there was a need for this service, we decided we had to start it.

The late Lester and Sylvia Bergman who lived on East Mountain Road, Cold Spring, held a cocktail party for the sole purpose of introducing Philipstown to Jim Jones.

Jim Endler, whose father had become blind, was at that party.   Realizing how much his father would appreciate a radio reading service of various periodicals as well as newspapers, Jim Endler came back to us a few days later. Tishman Realty, of which he was a Vice President, offered us a store on West 46th Street (Little Brazil) for a grand monthly rental of $1.

The Cold Spring Lions Club, whose mission includes services for individuals with visual needs, came forward with seed money. Having established a base and space near the theater district, this was the thrust we needed to get the service on the air.   Shortly after, we received a sizable grant from the Randolph Hearst Foundation.  The service went through WNYE and WFUV.   As the giant antenna rose on the World Trade Center tower, it aired nationally and then internationally.

Recognizable and not-so-recognizable names or out-of-work actors scheduled themselves on a regular basis for reading assignments, sometimes during the very early morning hours as the “New York Times” came hot off the press. Volunteers from everywhere came in to offer administrative, monitoring or other assistance.  Volunteers who were themselves disabled, did the taping, monitoring and editing.  Save for Jim Jones and one visually challenged Program Manager, everyone else was a volunteer.

After Jim died, the Jewish Guild for the Blind brought that radio reading service to their building on West 65th Street and housed it in their lobby for several years. But the story continues.   The Endler family requested that contributions be made to the Guiding Eyes for the Blind in Yorktown.   At this writing, the Cold Spring Lions, of which I am a member, is planning a Dog-A-Thon later this year to raise funds for Guiding Eyes for the Blind.   One of the members who lives in Cold Spring, Curt Landtroop, served as President of the Directors of the radio reading service founded by Jim Jones, and is currently a Director of Guiding Eyes for the Blind and Secretary of the Cold Spring Lions Club.   Currently, we are championing not only the raising and training of unique dogs for visually handicapped individuals, but lately, dogs to assist children with autism.

I never had the chance to thank Jim Endler for allowing our reading service to provide some independence to a larger than you realize community, of visually and physically challenged people.   So, I am expressing that immense gratitude to the Endler family and relating to Philipstown what Jim Endler meant and will always mean to me, personally.