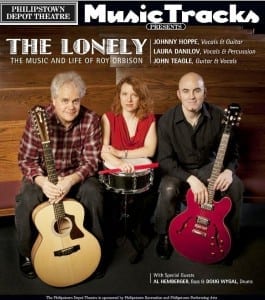 Roy Orbison’s real life story sounds as if it was concocted by a screenwriter for some lurid movie-of-the-week.  Rife with family tragedy, it also contained more than the standard number of commercial and artistic peaks and valleys.  Local musical trio The Lonely, who have been covering Orbison’s songs as well as those by his musical influences have now taken it one step further and put together a show charting the course of his life through his words and music.  The Lonely, composed of Johnny Hoppe (vocals and guitar), Laura Danilov (vocals and percussion) and John Teagle (guitar and vocals) will be debuting The Music and Life of Roy Orbison at the Depot Theatre on Friday, April 13 at 8 p.m. Find them on FaceBook.

Familiar to many as the iconic figure with the dark shades, movement-free performance style singing with mysterious emotional odes in his soaring vocal range, Orbison, born in Texas in 1936 was self-taught, largely by his father and his uncle, which was “probably to his benefit,” according to Teagle.  Originally his sound was in the rockabilly/country vein, but after an only moderately successful stint recording at Sun Records he changed his style upon a return to Texas, focusing on throbbingly emotional ballads sung closely into the mike, topped with the high end of his voice.  By 1960, now recording for Monument Records, where his first hit was Only The Lonely, (of course the inspiration for The Lonely’s name), he had developed his trademark style, and his popularity crested during the early 60s.  His biggest hit, Pretty Woman, sold seven million copies in 1964, but this high was followed by personal tragedies — his wife was killed in a car accident, and soon thereafter two of his three young sons were killed in a fire — and professional decline when pop music turned more to mid-60s harder-driving rock.

Absent from record charts (although still recording) during the 1970s, and suffering from chronic health issues, Orbison’s career revived in 1987 with the inclusion of his haunting song In Dreams in the David Lynch film Blue Velvet, as well as his induction into both the Nashville Songwriters Hall of Fame and the Rock and Roll Hall of Fame. It was that same year that Orbison joined with George Harrison, Bob Dylan and Tom Petty in an impromptu recording session which led to the formation of the Traveling Wilburys.  Their first record stayed high on the U.S. charts for over a year and won a Grammy for Best Rock Performance by a Duo or Group.  In a sadly ironic chain of events the increased scheduling and travel resulting from his renewed popularity may have been contributing factors to his sudden death from a heart attack at age 52 in 1988.

With so much life to encapsulate in a show, the members of The Lonely let the songs guide them.  There are upwards of 50 included, 40 of Orbison’s, and an opening medley of his influences, setting the musical stage for what had been going on when he was learning to play. The idea is to present Orbison’s whole life: highs, lows, tragedies, successes. Danilov says, “We looked at his life and the songs we have and how they fit in.  Some are done chronologically and others match where the sentiments of a song matches his life.”  Teagle adds, “We pull songs from all eras and though we divide his life into two sets there will be early stuff in both sets.” Lest it all get too dramatic, Danilov stresses that “Parts of the show are really fun, parts are really touching.  Sing along, get up and dance!”

“Roy’s music spans so many genres,” says Teagle. “He started with straight rock-a-Billy, then came the epic ballads, opuses with big productions.  The Sun stuff was primitive but in six years the minimal instrumentation and arrangements became full-blown things with a choir, and then he went back to basics with the Traveling Wilburys.  The music is challenging — it’s not simple music by any means.  For me it’s been a really rewarding experience just exploring my ideas of what Roy Orbison’s music was; I had never gone deep into the catalogue.  He didn’t stick to pop songs, he did fandangos, set something to [Ravel’s] Bolero, had the big builds to a dramatic climax – a lot of stuff you don’t hear.” 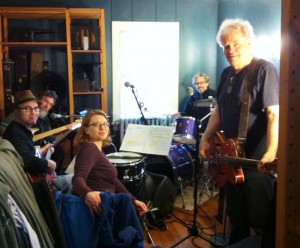 The Lonely came together as a musical group by chance.  Danilov and Teagle are pretty sure they both met Hoppe on the same night. Danilov recounts, “I went to see an Open Mic event at Whistling Willies. Johnny sang some Orbison songs and asked the audience if they could come up. I did, and Johnny came up to me afterwards.  I gave him a card and he called saying he had a Roy Orbison project and asked if I wanted to be a part of it.”  Danilov, whose name may be familiar to Philipstown.info readers under her other public role as the Haldane PTA president, has a musical theater background.  “I’ve been singing since I was three.  I came to the city to pursue musical theater training and wound up giving singing lessons, among other things.  I then had a baby, moved up here where it’s been great — I’ve been able to sing with great musicians.”

Teagle, who has also worn many hats, his most prominent right now being caretaker at Little Stony Point park, calls himself a “record collector and music history trivia buff.  I played guitar in the band at [Haldane’s production of] Grease last year, have played weddings, in punk-rock bars, plus I play bass drum in our local bagpipe band.”  Teagle knew a lot of Orbison material, but “never played it much because no one can sing it.  I suggested [to Hoppe] a duo, but then he told me he had invited a girl who sang at Open Mic, and it became a trio!”

Hoppe, who wasn’t at the Philipstown.info interview, was described by Teagle as having “lots of formal musical training. He was in choirs at school. He was in crazy, new wave bands and plays piano, guitar and bass.  He reads music and can notate. I had no idea he had anywhere near the knowledge and experience when I first met him.” Asked why they thought Hoppe first became interested in Orbison, both Teagle and Danilov answered almost in unison: “The voice!”  Danilov said, “He’s been told so often ‘You sound like him.’ The voice inspired him.”  Teagle added “After that reaction it snowballed to the point where it’s almost an obsession.”  But, according to Danilov, Hoppe “doesn’t imitate Orbison, he channels him.”  “He doesn’t feel the need to totally recreate inflections,” added Teagle. The same goes for the songs as a whole, for, as Danilov puts it, “Some we try to replicate, others we make our own, or use another vocalist’s version of them.”

Thus far The Lonely has pretty much played clubs, libraries and places like the Foundry Café.  This show is a big step for them.  “We’re doing it big,” says Teagle, “Lights, props, costumes, full band.  Usually we have no bass drum or bass guitar, but this time we’ve got Al Hemberger and Doug Wygal as special guests.”   The “book” for the show was written by all three band members, with Danilov noting that Hoppe “has done an exorbitant amount, but we all contributed over the past year and a half.”

The Lonely hopes that their new show has a life well beyond its debut at the Depot, envisioning In Dreams and who knows, perhaps in reality as well, a run in a theater in New York City at some point in the future. Tickets to the performance cost $15 and reservations can be made at brownpapertickets or by phoning the Depot at 845-424-3900.