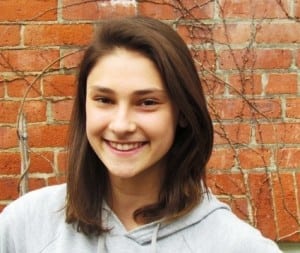 Kelly Vahos, a student at Haldane High School, was recently selected as one of the outstanding freshman volleyball players in the country for the 2011 fall season. Prepvolleyball.com, which ranked Vahos among the best, is a leading website for coverage of high school and club volleyball in the United States. A total of 220 freshmen were selected nation wide in four categories – The Top 59 Frosh, Highest Honorable Mention, Special Mention and Honorable Mention. Vahos earned Special Mention – placing her among the best 180 freshmen in the U.S. and one of the top 10 freshmen in New York State.

In making the selection, Prepvolleyball.com had this to say about Vahos: “[She] played a key role in Haldane winning the Class D New York state title this past season. She totaled 120 kills, 36 aces, 18 blocks and 17 digs … [she] was definitely a strong force at the net.” After winning that state championship, Haldane varsity coach Melissa Rossano said, “Kelly really helped the team achieve this goal … her serving was a great asset … and her spot serving was on the mark.” 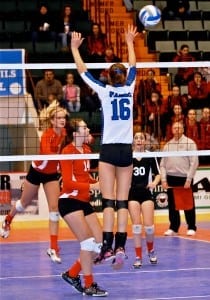 Joel Stanford, who coaches Vahos’ club team, the Downstate 15 Black, and is Director of the Downstate Athletic Center in Peekskill, one of the premier volleyball clubs in the Northeast, was not surprised that Vahos received national recognition. “Kelly has been instrumental in leading her [club] team to a position as one of the top young teams in the Northeast and potentially in the country. She leads the team in hitting efficiency and in blocks, dominating the middle of the court… she continues to improve…every time she steps onto a volleyball court,” he said.

An abundance of high praise for a young woman who only began playing volleyball two years ago. And she had a rather unusual rationale for getting into the sport. “It was a way for me to get out of playing football. I didn’t really know much about volleyball,” she said. She played on the modified team at Haldane in 7th grade and as a 12-year-old played on the Downstate club team for 13- year-olds.

Haldane puts a great deal of emphasis on the dual identity of “student-athlete.” Vahos describes her grades as “good in every class” and thinks that doing well now will pay dividends in her senior year. She attributes some of her academic success to volleyball and other activities that she participates in along with students who are older than her. “High School was a big transition,” she said. “I know I have to focus. Some kids don’t realize that 9th grade counts. But being on student council and being around older kids really encourages me to do well. “ 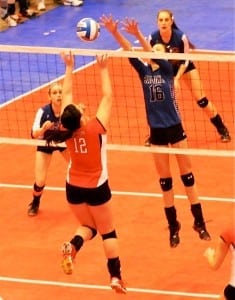 Just what is volleyball’s appeal? “What I like best is how fast moving it is – how every point matters,” she said. “Things can change in an instant and you really have to come in with the right mindset.” Vahos points to Deja McClendon, an outstanding player at Penn State as her volleyball hero – quickly adding her teammates at Haldane to the list.

Volleyball is now a year-round passion for Vahos – and if practice makes perfect she is well on her to stardom. She practices as part of the Haldane varsity team every weekday from August through November. Practices with her Downstate club team are held three days a week from November through July. Vahos hopes that volleyball will take her well beyond Haldane. “I’m too young to know where yet, but I hope it takes me to college and gives me a chance to do things to help other people,” she said. Teaching, physical education, athletic training and coaching are high on her list of interests. “I want to help motivate people,” she said.

She is only a high school freshman but colleges already have Vahos on their radar. Students can’t be recruited until their junior year but colleges can drop a not-so-subtle hint or two. She has already received emails asking her to “come and look at our school.” Vahos knows that is a bit unusual. “A lot of kids get emails – but getting them in the 9th grade is a big deal.” 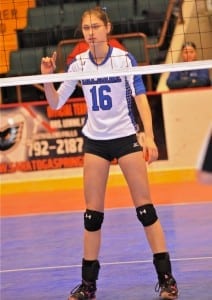 Vahos: ready at the net

Vahos appreciated making Prepvolleyball.com’s Special Mention list, but her competitive spirit comes through loud and clear when she talks about it. “It was amazing, but I was still disappointed [not to make the top Frosh 59 list],” she said. “If I had known how good I had to be – I would have tried harder. What really upset me was that a girl we beat in the state finals made it and I didn’t.” But Vahos says she benefitted from the experience. “I learned to move past it. I know I have to give 100 percent all the time. You never know who might be watching. “

While it will be a rebuilding year at Haldane, Vahos isn’t ruling out a trip back to the state final four. “I’m really excited about next season. People say we can’t go back to state finals because we lost four seniors,” she said. “Everyone believes you can only win every four years – that’s not true. I think we really have a chance. I want to prove them wrong.” If her teammates share Vahos’ mindset the Lady Blue Devils may in fact prove a lot of people wrong.

And there may be help on the way very soon from another family member. Kelly’s sister Brooke plays for the Downstate 13 Black team – recent winners of the Garden Empire Volleyball Association’s 13 Under tournament on Long Island. Like sister, like sister?
Photos by R. Vahos, except as noted