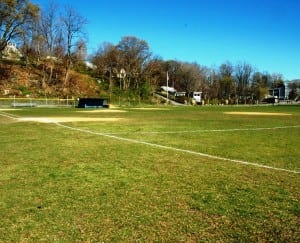 Officials Discuss Idea with Village Board

For 35 years in Philipstown, Pop Warner football has sought to light up kids’ lives with values – Family, School, and Football, according to its motto. Now it wants to light up its practice field at Mayor’s Park by installing a 35-to-40-foot pole, a proposition that on Tuesday (April 3) drew a generally sympathetic response from Village Board members, along with some questions as well.

At the northern edge of Cold Spring along the Hudson River between Fair Street and the railroad tracks, the park contains a large area with athletic fields. Pop Warner’s proposed structure, four lights atop a telephone pole donated by Central Hudson, would replace an inoperable portable, generator-run mechanism. According to Pop Warner officials, the organization would pay the village for the costs of the electricity and only use the light pole for autumn practices, when darkness comes earlier than in summer. Pop Warner organizes football teams for children aged 5 to 12, as well as cheerleading programs. Due to the popularity, it now has three teams practicing simultaneously, requiring better lighting, the group’s President and Vice President, Jon Champlin and Pete Giachinta, respectively, told the Village Board members.

The pole would be placed near the 3rd-base dugout and aimed so “we’re not bothering anybody. We don’t want to be in anybody’s way,” Champlin said, referring to residents on the opposite side of Fair Street and on Grandview Terrace, on the bluff above. He and Giachinta agreed that Pop Warner would put a stake where the pole would go, to give residents a better understanding of the location. Champlin said the lights would be on for about 90 minutes per practice, and shut off by 9:15 p.m., if not earlier. He estimated they would be needed for a total of 21 nights. Access to the lighting would require keys, which only Pop Warner officials and the village government would hold, Champlin explained.

Champlin and Giachinta said the village government could use the light system as well, if it wished. According to Mayor Seth Gallagher, at present the village must run a temporary cord from the adjacent sewage treatment plant to illuminate the Mayor’s Park athletic fields.

Invited to the meeting, neighboring residents raised questions about light pollution, intrusiveness, a lighting-demand snowball effect, and threats to property values. “Is this really as simple a decision as it’s made out to be?” Bill Ehrlich asked. “Certainly, introduction of a permanent lighting fixture represents a change in custom,” one that might affect property values, he said.

“We’re not looking to put up Yankee Stadium lights. That’s not what we want,” Champlin assured the audience.

“We’re talking about practice sessions, not games,” said Dick Turner, another nearby resident.  “So there’s not going to be that much of a demand” for lighting.

Ehrlich also asked if the light fixture would affect plans, anticipated in the town-wide survey of athletic fields, to significantly upgrade Mayor’s Park. If all the suggested Mayor’s Park improvements were made, the study pegged the cost at nearly $740,000. “I don’t think there’s going to be a huge investment in that field anytime soon,” Gallagher observed.

While stating that “I don’t want to ‘catastrophize,’” new Trustee Matt Francisco asked about whether the lighting fit in with the Comprehensive Plan’s call for minimizing light pollution.

Architect and village resident James Hartford, who worked on the anti-light pollution “dark skies” lighting at the village dock plaza, said an important aspect of dark-skies lighting is controlling glare. “So long as that’s addressed, I think it’s compliant with the dark-skies initiative” and Comprehensive Plan, he said.

Another resident, Matt Donachie, who lives on Grandview Terrace, emphasized that “I’m not opposed” to the Pop Warner request. However, he continued,  “I am concerned with a precedent that one becomes two, becomes four,” with escalating calls for lights by various organizations so that Mayor’s Park looks “just like West Point,” Cold Spring’s neighbor across the river, with banks of  bright lights. Gallagher said the light tower would only be used periodically. Limited to Pop Warner, “it’s a fall thing,” he said.  Meeting in an informal workshop with only three members (with Trustees Bruce Campbell and J. Ralph Falloon absent), the Village Board took no action, noting that further village discussion on the matter would ensue.
Photo by L.S.Armstrong