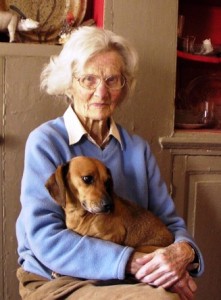 An inspiration to several generations

The Hudson River Valley and town of Philipstown have lost a cherished presence with the passing of Marie Louise “Risi” Saunders. Born November 10, 1915, in New York City, Risi died in her sleep on April 7, 2012, at the age of 96.

She was a quiet influence and inspiration in hundreds of lives through several generations, not through any single accomplishment but through her graceful way of living in harmony with the land and seasons and her habit of happily blurring the line between family and community.

Through her annual community Easter egg hunt and class visits by students in the lower grades of Garrison’s elementary school and St. Philips Nursery School, Risi introduced countless children to the beauties of farm life. As Christmas approached, angels and wise men came to the farm for the St. Philips Living Nativity Christmas pageant. The only time Risi ever failed to welcome people into her home came each year at this event as she played the role of innkeeper and, in stoic tones, told Mary and Joseph, “I’m sorry, there’s no room at the inn – you’ll have to sleep in the barn.”

Marie Louise Goebel Saunders came of age in urbane New York surroundings, attending St. Agatha’s School in Manhattan and then Vassar College. But early on, she developed a love of animals, with her favorite companion as a schoolgirl being her pet chicken, Julius, named after her father. 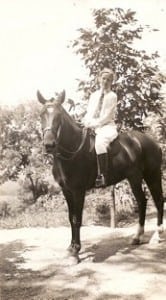 At Vassar, she was a member of the Daisy Chain,  the traditional college pageant. She also rode with the Rombout Hunt on her horse High Hat. As early as 1930, she and High Hat competed in the Garrison Horse Show. After World War II the show was revived at the Saunders’ White Gate Farm, with competitions ranging from cross-country jumping to a costume class, with one entry being “the Garrison Fire Company saving a foundation.”

She resided in Cold Spring at Glad Acres on Lane Gate Road, where she was married on June 14, 1935, to Alexander “Ander” Saunders, Sr.,  her longtime love who had first fallen for her as a young rider. The young couple moved to Garrison and two children followed – Marie Elizabeth (Betsy) and Alexander, Jr. (Sandy).

At White Gate Farm, they kenneled 34 beagles from St. Peter’s Boy’s School in Peekskill. Beagling was an energetic hunt on foot and was the main athletic activity of the school, with the dogs and students chasing rabbits through woods and fields. The beagle transport vehicle, Chilly Bean, a converted passenger car, was a familiar sight with its huge wire cage affixed to the back.

Risi’s husband left banking with Chase in New York to run the Garrison Highlands Corporation. He enlisted in the Navy in 1942, serving in the South Pacific and North Atlantic, leaving Mrs. Saunders to tend the beagles and manage White Gate Farm, which involved grooming the horses, feeding and milking the Jersey cows, raising her chickens and tending her vegetable garden.

Risi served as board member and chairwoman for the Garrison Union Free School and actively participated in the Philipstown Garden Club, serving twice as president, from 1946 to 1950 and from 1960 to 1962.

From 1962 onward, she also served as national conservation chairwoman for the Garden Club of America and worked tirelessly with her husband and son on the establishment of the influential environmental organizations Scenic Hudson and Clearwater. The first concert to raise funds to build the Hudson River Sloop Clearwater was held in 1966 at the Saunders’ farm,  with Pete Seeger and friends performing on a hay wagon as a stage. Many of the formative meetings for the environmental organization named for that vessel were held in her living room.

At home, Risi continued to be actively involved in the farm operations and gardened extensively, growing most of her own vegetables. She also became a proficient weaver and seamstress, making many of her own clothes. The Saunders’ sheep provided wool for cozy blankets, many of which were given as wedding and baby blankets to her friends.

One wonderful example of her skill as gardener and cook was a seated dinner at her house in Garrison for the chairwomen and husbands of the many regional divisions of the Garden Club of America. Everything on the table, from the wine to the lamb curry, came from her garden and the farm.

She participated actively in St. Philips Church, including hosting the welcoming dinner for the arrival of the Reverend Frank Geer at the start of his term of service in Garrison.

Risi’s artistic talents were shared through sketches and watercolors from her travels and woodblock Christmas cards. She collected works from many of her artist friends, including Charles Locke, David Finkbeiner, Frank Heuston, Jerry Prueitt, and Joan Benjamin.

Loyal musical friends joined her every Tuesday through three decades for recorder sessions. The ensemble performed regularly at Manitoga and St. Philips and was featured as the cover art of the New Yorker in March 1980. More recently many of the same friends joined her for knitting and conversation every Monday.

Her neighbors along the historic Old Albany Post Road, which Risi worked to keep in its unpaved state, will miss the fresh-baked chocolate chip cookies that, until her final years, were always ready and waiting in a tin atop her refrigerator.

She is survived by daughter and son, six grandchildren and six great grandchildren. A memorial celebration will be held at St. Philips Church in Garrison at 1 p.m. on Saturday, April 28th.