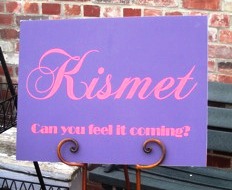 Caryn Cannova is a fly by the seat of your pants kind of girl. Whether life throws her an unexpected opportunity or an unanticipated curve, she rolls with it and adapts.  Twelve years ago, with absolutely no background in retail, she came up to Cold Spring on a day trip, saw a small storefront with a ‘For Rent’ sign in the window, inquired, and opened up her first store, Payning By Caryn, just three weeks later.  The twelve years that followed have taken her first from smaller to larger premises, edging down Main Street to her current location at #72, where she’s been doing business for seven years now.

It’s not just the location that has changed.  Cannova’s original store was devotedly solely to her stained glass work, hence the name, incorporating both product and proprietor.  As the times changed, and the faltering economy lessened the demand for her thousand-dollar windows and doors, Cannova realized what she was selling was simply too limited to sustain her business.  Rather than close up shop, she reinvented it, incorporating giftware and housewares into her merchandise.  With the closing of Merritt Books, which had a children’s book and toy section, Cannova, by then the mother of a young son, converted the back room of her two-room store, into all-purpose children’s gift shop.  Now, she’s at it again, this time in a top to bottom way: she’s renovating, changing her product lines and even changing the store name to one reflecting her philosophy and life’s path: Kismet, whose synonyms, according to Merriam-Webster, include circumstance, destiny, fate, doom and fortune. 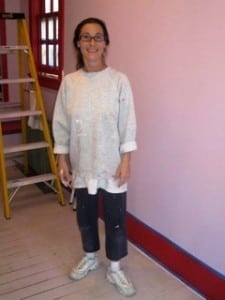 Caryn Cannova in her painting gear, in front of a newly-painted wall.

Inside the currently papered-up windows of 72 Main, rooms are being repainted in hopes of a soft opening this coming weekend.  New merchandise is arriving, some of it scoped out during a recent trip to Virginia Beach during which Cannova alternated sunbathing with driving here and there to the many boutiques in the area, finding new products not available locally or featured at the New York Gift Show she attends each year. That she wasn’t content to simply relax on the beach will come as no surprise to those who know her, as the term “bundle of energy” might have been coined for the vivacious Cannova, who, in her pre-Cold Spring life was a dancer, “I studied modern and then teamed up with a former New York City Ballet dancer and we became a duo, called ‘The Outlaws’ — sort of fly girls gone country — we performed at lots of places, from Roseland to Rockefeller Center.”

Other new product lines, many suggested by current customers, will be added before the “real” opening the week before the Mothers’ Day weekend.  And it won’t end there, but will keep evolving, “Over the next six months our footprint will be redefined, and over the six months after that we’ll be changing up the merchandise but offering the same quality, the same price points.  We’re very conscious of the cost of what we stock — we’re not the Dollar Store, but we do have reasonable price points,” says Cannova, who adds that the new store will feature “home décor, accessories, jewelry and items for babies and children.”

The changes were precipitated largely because of changes in the marketing of one Payning By Caryn’s dominant product lines in the past, Vera Bradley merchandise.  Introduced to the line years ago by her mother, who told her to “look at what women are carrying,” it took Cannova two years to get what was then a coveted authorization to carry the distinctive paisley-patterned products.  “I was so excited,” remembers Cannova, “I made a huge investment, with a large loan which then paid for itself in just six weeks.  From there I put all my efforts into Vera Bradley.”  Eventually the Vera Bradley line occupied most of the large front room of the store.  Then, last year the Vera Bradley corporation went public “and that’s when I knew I had a problem,” says Cannova, “Now there are outlets all over the place; the market is saturated.  I can’t compete with QVC [the cable television shopping channel].  It didn’t affect my core, local customers, but it did affect their friends, who often shopped here when they visited, and now had options to get it cheaper elsewhere.  I don’t begrudge them — a buck is a buck. Times are changing, I need to reinvent; it’s scary, but good, fresh.  I’m coming out strong, and — I’m involving my customers.”  Kismet will still carry some of the Vera Bradley line, focusing on merchandise not available at the outlets.  Customers will also still be able to special order particular items. 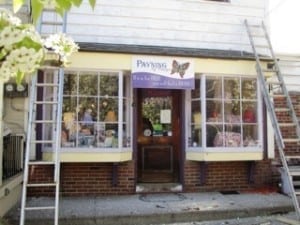 The former storefront, before the transition

Those customers are, surprisingly, “about 95 percent local, believe it or not,” according to Cannova.  “It didn’t start out that way, but I cater to my locals: you come in and buy a gift and I log it, have it on record, so if your husband comes in months later and doesn’t know what to get, I know what you like. Webkinz [small plush animal toys with special codes which allow kids to play with them in online scenarios in the virtual Webkinz World — a hugely popular craze for a time] put me on the map.  I do whatever I can to make sure the locals are taken care of.  I try to discount when I can.  The locals keep me alive.”

For Cannova, Kismet is the latest place card on her long list.  Asked where she was from, she rattled off an answer: “Born in Denver, then Omaha, Los Angeles, Seattle, Philly, New York City, then here.”  And how did she get from dancer to stained-glass artist? “I retired from dancing in 1998 and was very lost, had no identity.  I was living in Manhattan and I started finding old window frames left out on the street and began refinishing them.  Someone suggested I learn how to do stained glass and so I studied it.  I never dreamed it would turn into a profession.  I was this madwoman making windows on 33rd Street between Second and Third!  And then I came up here!”

Returning to the present, she explains how she arrived at her new store name, “I’ve always believed in fate.  So I thought, let’s just name the store what’s happening in my life: kismet.”  Having spent years explaining the genesis of the name Payning By Caryn to confused customers, Cannova now finds that not everyone is familiar with the word kismet.  Here she goes again!

3 thoughts on “Kismet: A Store and a Fateful Way of Life for Its Owner”