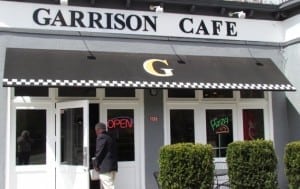 Doors open at 6 a.m. at the new Garrison Cafe

The Garrison Cafe is open for business, welcoming customers daily from 6 a.m. until 7 p.m. Located just south of the Garrison Post Office on Route 9D,the cafe is owned and operated by restaurateur Pascal Graff who also runs Le Bouchon in Cold Spring.  The new cafe offers fresh hot coffee to early morning commuters along with home made pastries, breakfast sandwiches or a full breakfast. The main menu includes numerous sandwiches, salads – some of which are ready to go – artisan pizza, and a variety of burgers made from grass fed beef, traditional beef, turkey, salmon and veggies. Soft drinks are also available. The interior has been redone with a sharp, fresh look and offers tables for customers who want to eat in. A February article in Philipstown.info outlined Graff’s longer term plans which include an expanded patio, evening hours, beer and wine sales and a dinner menu. While the official closing time is 7 p.m., Graff said customer response has been so good during the first week of business that the cafe has often stayed open until 8 pm.  “And if you call at 6:50 to order a pizza – we’re going to stay open for you,” counter man Devin Gell said. Another key employee is pizza maker Tony Gjokaj who uses the wood-fired oven to produce a variety of pizzas that will suit most any taste. 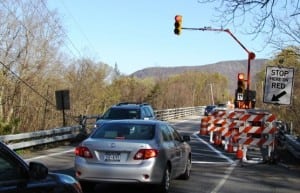 Temporary traffic signals at Indian Brook Bridge: traffic is limited to one lane.

Work continues on Indian Brook Bridge located on Route 9D between Cold Spring and Garrison.  On (Wednesday) April 11, crews installed temporary traffic lights at both ends of the bridge. The lights are needed because traffic is now limited to one lane. The new signals are similar to the traffic lights being used on Snake Hill Road. In a story posted on Philipstown.info last week,  Jon Morucci, quality control/health and safety officer on the job, estimated that work will be complete in July. As a result of the project, Indian Brook Road is now closed to all but local residents.

The arched bridge will first undergo an abrasive blast to remove all existing coating and impurities and will then be sprayed with a layer each of zinc, epoxy and urethane – about 3,000 gallons in all – to protect the bridge from corrosion. Such maintenance is carried out every 10 to 15 years. Work is being supervised by Liberty Maintenance Inc., a company based in Youngstown, Ohio. Most workers on the project are members of Structural Steel and Bridge Painters of Greater New York Local 806.
Photos by M.Turton