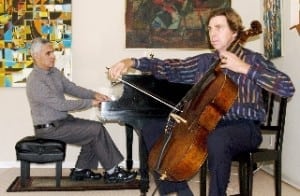 Frank Murphy, who employs an energy-based approach to cello playing that fosters greater virtuosity, meaning and presence in performance, and Michael Golubov, a musician/architect with award-winning solar energy projects among his credits, will bring their combined creative energy to performance at The Chapel Restoration on Sunday, April 22 at 4 p.m. The concert is free. The program will include Beethoven’s Sonata No. 1 in F Major, Brahms’s Sonata No. 2 in F Major, and Debussy’s Sonata in D Minor.

Frank Murphy received a Master of Music Degree from the Juilliard School where he was a scholarship student of Claus Adam and Lorne Munroe. He has performed extensively as soloist, chamber musician and orchestral player in New York City and surrounding areas and throughout North America. His work includes solo performances at Alice Tully Hall and Carnegie Hall and chamber music performances at Alice Tully Hall and Weill Hall. Murphy developed and teaches the energy-based approach to cello playing that he employs in his own performance. He performs on a C. G. Testore cello once owned by the great 19th century virtuoso David Popper.

Michael Golubov attended Amherst College and graduated from the Julliard School in piano where he studied with Sasha Gorodnitzky, Ilona Kabos, Louis Persinger and Felix Galimir. He also received a Masters degree from Columbia University School of Architecture and went on to specialize in design and building solar installations and wind generators. Mr. Golubov has revived his piano playing during the past half decade and his professional performances include recitals with Mr. Murphy.

The Chapel is at 45 Market Street, Cold Spring, and free parking is available on weekends at the adjacent Metro North Station. This concert is made possible, in part, by New York State Council on the Arts with the support of Governor Andrew Cuomo and the State Legislature and public funds from Putnam County, grants managed and monitored by Putnam Arts Council. Contributions from the public are welcome.