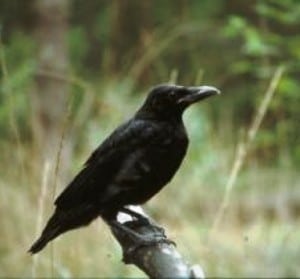 Normally, I try to be as unbiased as possible in what I write. But this is one of those rare exceptions in which I openly admit to playing favorites.

I have been fascinated by crows since I was a young boy of about twelve. I had just finished reading a book called Wild Animals I Have Known which consisted of eight or nine chapters, each devoted to a different creature. I was very surprised to see that the lowly crow was included.

It was, I thought, such an ordinary, unspectacular bird – why would the author bother with it? Oddly, I don’t remember any of the other animals that were in that book.

The author, in a statement that amazed and confounded me at the time, said crows are the smartest animal. Among other things, he wrote about the language crows use. A language? A crow language? Was that possible? He even illustrated part of the crow’s language in musical bars – showing which combination of notes made up a warning call, a scatter call or a “let’s get together and party” call — although I don’t think he used those exact words.

The smartest animal there is? I was determined to put his theory to the test.

As luck would have it, just as I finished reading the chapter on crows, a single crow was sitting on a tree branch about 75 feet from the room I was in. He was facing me. I stood close to the window, waving my arms. He did nothing. I kept waving, jumped up and down and waved again, but he was completely disinterested.

I went into the big walk-in closet, where, behind a thick wall of winter coats, was the single-shot, .22-caliber Cooey rifle that my dad thought he was hiding from his four sons. I picked it up, walked back to the window and stood there holding the rifle diagonally across my chest. Instantly the crow flew away, cawing loudly. Maybe the author was onto something.

Google “crows” and you’ll quickly see their considerable intelligence is now widely accepted and well researched. One source said crow language includes as many as 250 different calls – although, like people, crows from one region may not understand what crows from somewhere else are saying.

They are also one of very few animals to make and use tools. Crows have been seen using sticks to dig up insects. When a stick isn’t doing the job effectively they can adapt it – bending it to create a hook at the end. When finished using their newly fashioned tool they don’t discard it – but take it along for future use.

They also seem to value group dynamics. They sometimes work together to solve problems. And when one of their own is threatened they come together in a behavior known as “mobbing” to drive off the foe. Part of the reason for the crow’s great intelligence is a brain size more in line with a mammal than other birds.

Crows also have a sense of humor. They have been seen pulling pranks such as plucking clothes pins off a clothes line – seemingly taking delight in seeing the clean clothes fall to the ground. They have also been known to sneak up behind a cat to pull its tail.

You might call them entertainers as well. Crows can mimic sounds in nature – including the human voice.  The more time they spend around people the more likely they are to mimic humans. Crows in wildlife centers and zoos are said to be the best mimics of homo sapiens – while crows in the wilderness and less populated areas are less adept at human sounds.

The nuclear family is alive and well in the world of crows. They live in families made up of a breeding pair and their offspring from the past two seasons – usually at least nine birds. All family members help raise the youngest birds – and extended families can often be found living nearby. Crows are gregarious – you seldom see a loner.

And speaking of family trees, the American Crow, or Corvus brachyrhynchos as my 10th grade Latin teacher would have referred to it, has relatives that include magpies, jays, jackdaws, ravens and rooks – not to mention at least 40 other species of crows.

Crows eat pretty much anything. Their diet ranges from nuts, grains and berries to mice, worms and fish. They prey on eggs found in other birds’ nests and will also munch on garbage and carrion. Little wonder the term “ravenous” can be traced to the crow’s cousin the raven.

Crows do well in a broad range of habitats.  Basically they need trees to perch in and a good source of food. They are found near urban areas and agricultural lands, in parks, on the shores of rivers, steams and wetlands, around landfills, golf courses and cemeteries.  They live on every continent except Antarctica. 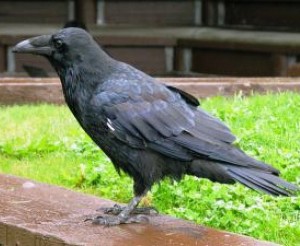 People often confuse crows with ravens but they are distinctly different.  A raven is considerably larger – about 25 inches tall with up to a 4 foot wing span. Crows are only about 18 inches tall with a wing span of up to about 3 feet.

Ravens also have a bigger bill than a crow and are also known to soar fairly commonly whereas a crow can only glide for a matter of seconds.

Suzie Gilbert, a writer and wild bird rehabilitator in Garrison, shares my affection for and fascination with crows.

“I love all birds, but crows are my favorites. They’re incredibly smart and resourceful; they’re very badly behaved, yet they can be so delicately affectionate that they’ll break your heart, “ Gilbert said.  “A large extended family of crows reside near my house. They are wild…but in the morning, if I whistle, a squadron of them will fly in from all directions, happy to eat the soaked dog kibble I leave for them.

“Every year they bring their fledglings, and introduce them to the strange whistling biped who gives them food for free.”

When I worked in conservation in Ontario, there was a crow rookery in a five-acre woodlot within sight of my second floor office window.  In late fall and early winter crows would fly there in huge numbers every day around dusk – from every corner of the county – like so many spokes on a wheel. It was a fascinating sight that I looked forward to at the end of each work day.

In December one year, after the 2,000 to 3,000 crows had settled in for the night, it rained hard for some time, followed by a sudden and very rapid drop in temperature, to well below freezing. The next day a neighbor called and said I just had to go with him to the rookery. I did. Every crow had frozen to death. They sat there on tree branches, hundreds upon hundreds of them – looking very much alive – but all had perished.

I approached a crow sitting on a branch and touched it – it teetered and fell backwards – and ended up up-side down, it’s frozen feet still clinging to the branch. I shivered. It looked like a scene from an Alfred Hitchcock movie, and the eeriest sight I have ever witnessed in nature.

Facts about crows that you can’t live without

Anyone interested in learning more about crows should check out this interesting article from the Smithsonian Migratory Bird Center.