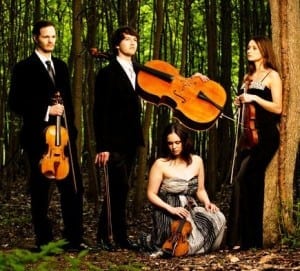 The Howland Chamber Music Circle (HCMC) announces the debut to its series of the young Voxare String Quartet, featuring Emilt Ondracek-Peterson and Galina Zhdanova, violin, Erik Peterson, viola and Adrian Daurov, cello, on Sunday, April 22. For their concert at the Howland Center the quartet has chosen to play Two Pieces for String Quartet by Aaron Copland, Terry Riley’s Cadenza on the Night Plain, and Antonin Dvorak’s String Quartet No.12 in F Major, Op. 96 The American.

The Voxare String Quartet formed in 2008 and has since received critical praise for its inventive programming, technical prowess, attention to detail, and passionate performances. The New York Times recently declared that Voxare plays with “penetrating tone and lucid textures,” and has on numerous occasions chosen Voxare as its Classical Pick of the Week. The Washington Post praised their intensity and energy in this way: “The group jumps on its music with all fours and makes the tussle worth hearing.”

Voxare is a frequent performer at Bargemusic in New York City where they have been quartet-in-residence. Voxare has been featured live on WNYC’s Soundcheck, and its concerts broadcast on WQXR. Voxare’s unique performing activities earned the quartet Chamber Music America’s 2010 ASCAP Award for Adventurous Programming. Voxare has studied with the Juilliard String Quartet at its String Quartet Seminar and with the Kronos Quartet through Carnegie Hall.

With a repertoire spanning five centuries, Voxare has frequently worked closely with leading composers, including Pulitzer Prize winners Ned Rorem and David Del Tredici. In 2010, Voxare was Quartet-in-Residence at the International Computer Music Conference, and presented a three day Mostly Riley Festival to celebrate the 75th birthday of Terry Riley at Bargemusic. This season, Voxare performs works by living composers at its residency series, DIG IT! New Music, at Teachers College, Columbia University, and a residency at Dartmouth College, as well as a series of concerts for Columbia University’s Lunchtime Series featuring works of Barber, Copland, Ives, and Thomson. Voxare can be heard on the soundtracks of several films shown at festivals such as Sundance and Tribeca.

The concert will take place at the Howland Cultural Center, 477 Main Street, Beacon and will be followed by a reception to meet the artists. Tickets are $30 ($10 for students) and can be ordered by calling 845-297-9243 or through the Chamber Music Circle website, where further information on this and other presentations can be found.