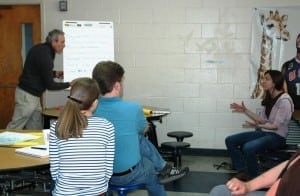 The approximately 80 members of the public at the Butterfield redevelopment charrette on Saturday (April 14) firmly enunciated their preferences for the old hospital site: more pedestrian-friendly “walkability,” smaller buildings and reduced density, and plenty of open space, including a permanent home for the Cold Spring Farmers’ Market. The charrette, a design and conceptualization workshop, invited comments on drawings prepared by Ray Curran, a planner and illustrator, as alternatives to the designs proposed by Paul Guillaro of Butterfield Realty LLC, the property owner. Last October, Guillaro outlined plans that called for 90 units of housing — 50 apartments for modest-income residents and 40 “market rate,” upscale condominiums for more affluent buyers, both for senior citizens-retirees; an intergovernmental municipal building for assorted Cold Spring village, Town of Philipstown, and Putnam County offices; and commercial-retail space, with room for the post office. Guillaro subsequently expressed willingness to tweak his blueprints, if necessary. As it turned out, although town, village and county officials backed the concept of the municipal building and wise use of the property, questions arose from public and political leaders alike about some components of the plans, including apparent inconsistencies with some provisions of the Cold Spring Comprehensive Plan, adopted in January.

Hence the charrette. Held in the Haldane school music room, the event drew not only residents of Cold Spring but a scattering from throughout Philipstown. The entire Cold Spring Village Board – Mayor Seth Gallagher and Trustees Bruce Campbell, J. Ralph Falloon, Matt Francisco, and Charles Hustis – took part, along with Philipstown Town Board Members Dave Merandy, Nancy Montgomery, and John Van Tassel.

“We’re going to try to get feedback from everybody,” Ted Fink, the planner assisting the village government with oversight of the project, declared at the onset. “It’s so important that we hear what you have to say.” Although Guillaro wanted “approval yesterday” or something very akin to it, Fink noted, “the village has taken a time-out [and] said ‘we want to have input from everybody’ in the village and to be in the driver’s seat.’ We’re trying to come up with a better plan.” 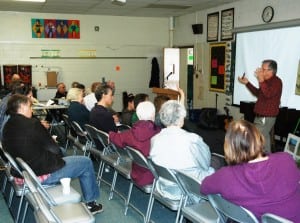 Ray Curran makes a point in a group discussion

Criticism in the months after Guillaro’s 2011 presentations influenced Curran’s alternative designs. His first version retains 50 units of modest-cost apartments but reduces the number of condos to 24. The second eliminates the modest-income apartments entirely but provides for 36 condos. His plans likewise call for wide swathes of green space and drop elements of Guillaro’s 2011 design that conjured up images of a non-gated “gated community” separate from the tightly-knit village around it. All the plans, including Guillaro’s from last fall, anticipate demolition of the abandoned old hospital building.

The charrette began with a welcome from Mayor Seth Gallagher, an overview by Fink, and Curran’s explanation of his designs. The next phase consisted of the breaking of the audience, including elected officials, into three groups to brainstorm on Curran’s designs and possible improvements. But before the preliminaries got finished, a couple of audience members objected to the process.

“You’re forcing this audience to make a choice where perhaps they don’t like any of them!” one man said loudly.

“We’re being jerked around!” another contended.

The mayor reminded participants to respect protocol and not seize the floor to shout out at will. The assembly then broke into the smaller feedback groups. For about an hour, suggestions, criticisms, complaints, and other reaction bounced around the music room and cafeteria and were duly recorded on large sheets of paper. Many comments dealt with traffic, cars and parking and the related issue of pedestrian safety; the scale of the buildings, and fears of the redevelopment becoming a detriment to the village.

Even with more green space, “it still looks like a lot of parking,” resident Andrew Hall said, eyeing Curran’s designs. Stephanie Hawkins urged that the parking should not be what based on the number of spaces that could be crammed in, and “not on what the community would tolerate” but on “what we as a community want to see.” 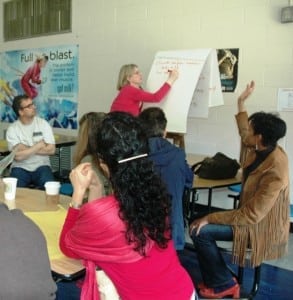 In remarks frequently echoed by others, Tom Rolston, a local restaurant owner who lives on Grove Court, a small residential section next to the Butterfield property, said he and his neighbors “don’t want cars dumped onto Grove Court and Paulding Avenue. I don’t mind the pedestrians; we love the pedestrians,” he added.

Another, unidentified participant said that “those houses are lovely” along Paulding Avenue, which contains elegant homes from the 19th century, and with development and traffic, “they aren’t going to be lovely anymore.”

Trustee Falloon recalled the days when the hospital still operated and generated continuous traffic; he suggested more effort to mitigate the flow of traffic into the residential areas. “I grew up there, so I know what it’s like,” he said.

In a different break-out group, worries about pedestrian safety likewise surfaced often. “A desire for walkability on all fronts was of paramount importance,” Dar Williams said, summarizing the concern.

While attendees often mentioned hazards related to traffic, they did not always agree on the best ways to handle them. Some recommended stop lights on Route 9D to control speeds and assist pedestrians. However, some residents in the Paulding-Pine Street area cited fears that a traffic light at the spot where Route 9D, Paulding Avenue, Chestnut Street, and Bank Street converge would make the situation worse. Some in that neighborhood similarly opposed allowing traffic to exit onto Paulding Avenue from Butterfield. Conversely, a resident of the busy Marion Avenue neighborhood, behind the Foodtown Plaza that lies across Route 9D from Butterfield, cautioned against non-egress. “You need flow,” Janice Hogan said. “You really do.”

The housing plans also drew skepticism. “Lose the affordable housing,” advised Judith Rose, a professional in the field of affordable housing. “I don’t feel it’s economically feasible in this location,” given New York’s State current level of economic commitment to such programs. 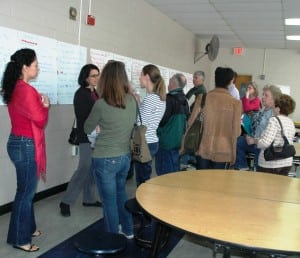 Like others, Marjorie Gage questioned the nature of the planned Butterfield residential component. “I walk every street of this village,” and have a sense of its attributes, she said. “I don’t think we need a mini-village there … a pseudo-village. Downsize the density. I don’t see why a village like Cold Spring needs 91 parking spaces, much less 250. Overall, it’s just too big, and there’s too much emphasis on cars and not enough on people and the village as it now exists,” Gage said. Curran proposed about 215 parking spaces, including 40 to 50 along Route 9D.

While doubts about the affordable senior apartments existed, strong support was voiced for having a kitchen-equipped senior citizen center as a distinctive entity, not part of an overall community center at Butterfield. “Where are we going to be?” asked Donna Anderson, trip coordinator for the Philipstown seniors organization. “A community center is not for our seniors. We need access to the room all the time. We can’t share access with everybody.”

The mayor and Curran responded that the senior facility could be part of the municipal building. “The important point here is having a dedicated space for seniors,” Gallagher told her. At least a couple of participants also sought to save the old hospital. “It represents the past,” Janet Rust said. Donna Anderson offered another perspective: “Those bricks are deteriorating … it’s ridiculous.”

Attendees suggested numerous uses for Butterfield green space: A dog run, botanical garden, fountain, and more. One wanted a swimming pool, another loudly opposed it. Yet on one point, unanimity prevailed. As Kathleen Foley summed it up: “Make a permanent home for the Farmers Market.”

After the three break-out groups reported back to the re-assembled whole, reading the remarks and ideas scribbled on their sheets, Fink explained that all the comments and suggestions would be compiled for the village Planning Board. Joe Immorlica, who served on the Planning Board for about 35 years before recently retiring, urged the public to now let village officials get on with the necessary processes. “Let’s start going forward. Let them do their job and let’s have no more public comment until the public hearing,” a formal, legal session when the ostensibly-final plans are submitted.

Another resident, Thomas Ambrose, informed the audience of a new Facebook page, Better Butterfield. “It’s meant to be a public’s point of view,” he said.

Immorlica scoffed. “Leave that to the proper authorities so they can work with those folks” at Butterfield Realty, he said.

The principal player at Butterfield Realty, Guillaro, stood at the back of the room throughout the morning but said nothing. “I’m just listening, to see what people have to say,” he told Philipstown.info as the charrette wound down. “It sounds like it’s been productive.” Before departing, the participants placed stickers on the groups’ sheets of recorded ideas, marking those they liked best. In general, the dots endorsed the comments expressed aloud.
Photos by L.S.Armstrong