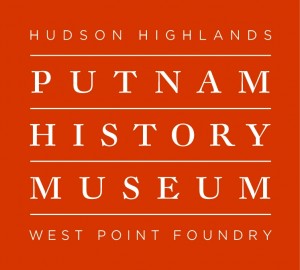 The Putnam County Historical Society and Foundry School Museum is no more.  Or rather the long and winding name is gone. Henceforth, the museum located on Chestnut Street (9D), will be known more simply as the Putnam History Museum.  With the name change comes a redesigned logo that seeks to better identify the museum’s mission as well as its place in the Hudson Valley region.

Unveiled by Board Chairman David Duffy at the organization’s annual meeting at the museum on Saturday, April 13, the new logo was received with enthusiastic applause by board directors and members alike.  Duffy said the new look arose from considerations for a planned new website and social media campaign.  He said the old moniker “was a mouthful of a name,” that when truncated to PCHS “meant nothing.” He said the issue had “bedeviled both the board and the executive director for years,” and that there was general consensus the change was overdue. 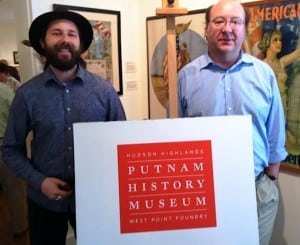 Duffy credited designer and newly elected museum board member, Nic Taylor, with providing guidance toward resolution of the name issue as well as the technical support needed to create the look and feel of the logo and eventually the website.  Taylor and his wife J.B. Taylor are proprietors of Thunderwing Press in Garrison, which specializes in letterpress design and printing.

In a follow up email Taylor explained to Philipstown.info some of the rationale for the design. “The format and color is contemporary and memorable, to catch people’s eyes and attention, while the form is stable and strong because we are a hub in the community. The combination of typefaces shows a span of time, from the beginning of the Dutch settlement to modern-day New York.” Taylor later added, “The color is inspired by rust, a symbol of age, particularly of iron, which refers to our relationship with the West Point Foundry.”

Hudson Highlands is also included in the logo as both a geographic and historic reference. Later in the meeting, Mindy Krazmien, executive director, underscored the theme of contemporary communication by calling attention to the museum’s social media initiatives emphasizing use of Facebook and Yelp applications.

Notwithstanding the enthusiasm generated by the new projects and upcoming exhibits and events, Duffy opened the meeting with a financial report to the membership indicating that the organization’s operation was more or less in fiscal balance but that prudence dictated some reining in of spending. Duffy cited a trend in lessening support from the state, county and town governments as a principal cause. He said that lowering annual spending from approximately $265,000 to $225,000 was necessary, “otherwise we will be constantly in a scramble.”  He also reported that museum’s endowment had dipped from $746,000 to $686,000 in the past year but had risen to $713,000 recently. He said the board wanted to avoid dipping into the endowment beyond a 4 percent annual draw down, which is consistent with general sustainability standards for endowments.
Photo by K.E.Foley