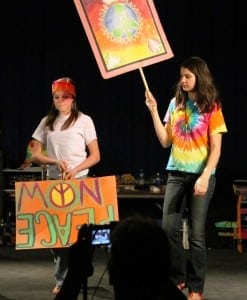 “We choose a different theme each year because it is hard to get eighth-graders excited about early 17th century costuming,” said English teacher Ian Berger (who leads the production.) “I had a few ideas for this year’s production but when my students suggested the 60s; I thought about the tension between civilians and the military in Twelfth Night and knew they were on to something.” For the 60s theme, students decorated the stage with period props such as vintage radios, furniture and protest signs while 60s music played in the background.

“All of the students did an exceptional job,” said Berger. Of special note, Sara Labriola composed and performed three original songs on stage; and Macdara Heanue stepped in to a lead role at the last minute to take over for a friend who fell ill just before the performance. What each performer accomplished was remarkable.” 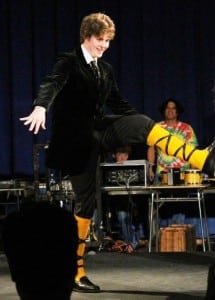 One of the lead actors in the play, Luke O’Connor, shared his experience: “It was really fun to play Malvolio. He is a mean butler in some scenes, in love in others and he makes a fool of himself too,” said O’Connor, who admitted to catching the acting bug. “Shakespeare is very difficult to learn. We couldn’t have done it without the help from Mr. Berger and Ms. [Katie] Feder.”

“Our students learn much more than just memorizing and reciting their lines,” said Garrison Principal Stephanie Impellittiere.  “Mr. Berger has made a conscious effort each year to integrate the sixth- and eighth-grade plays into the Language Arts curriculum through drama, literature and social studies. The students gave fabulous performances. We are incredibly proud of the entire production.”
Photos courtesy of Garrison School