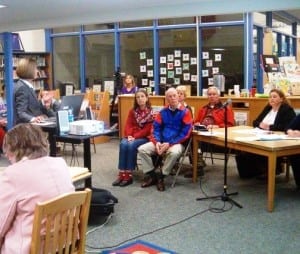 The new state-mandated “2 percent tax levy cap” was a major consideration in this year’s budget deliberations. Looking to the future, Board President Carol McCullough expressed the board’s goal of “leveling out” year-to-year increases. At its March 21 board meeting, Business Manager Susan Huetter presented a 5-year budget plan extending through the 2016-2017 school year. The forecast included budget-to-budget, tax levy and tax levy cap increases.

The projections in the 5-year plan presume only “step” salary increases (the base teacher salary increases in their contract) and anticipated capital spending. GUFS is currently negotiating with the Garrison Teachers Union on a new contract. The district will be completing construction of a new “shed” which is the only capital project on the boards, with none contemplated in the immediate future. Capital spending is an expense exemption on the tax levy calculation required by the state. Both these items will impact future budgets and tax levy assessments. “If we don’t have a capital plan in place, it can’t be part of the tax levy cap calculation,” said Huetter. “You can’t just go out and spend all your money … to avoid [budget] ups and downs.” [See GUFS Holds First Budget Workshop]

Explaining the plan, Superintendent Gloria Colucci explained that the “discrepancy between the [tax] levy and [tax levy] cap will require planning … because we can’t exceed the cap.” Tax cap planning “is important to consider,” said Huetter, as well as “replenishing fund reserves to level out [year-to-year tax levy increases.]” Over the past several years the GUFS board has included $100,000 (from the general reserve fund) as revenue for budgets. According to the 5-year plan’s projections, this fund will be depleted by the 2015-16 school year.

Referring to the impact of capital spending on the tax cap levy, Trustee Jim Canon asked: ”Is the state intending to encourage spending [by allowing the exemption]? Huetter replied that she felt “it is meant to cushion [the] cost and not [to] have school facilities deteriorate.”

Trustee Charlotte Rowe was “concerned that voters will be confused, as the ‘2 percent’ cap is a misnomer” and it “will fall to the board to educate voters.” Colucci agreed, saying that “more information has to go out to educate the public.” Evidence of the need for public education may be found in the low attendance at the first two budget workshops. Workshops over the past two years have been well-attended with much community discussion, suggestions and recommendations. Board members agreed this may be due to public presumption that the 2 percent cap is a given. Rowe suggested that the board should “present different [budget] scenarios” including further budget cuts.

McCullough acknowledged the benefit of presenting different options to residents, but cautioned that the “danger of reducing the budget increase this year, is that in the future it will widen the gap between the tax levy cap and any [budget] increases; resulting in more money needing to be cut.”

Canon, agreeing with Rowe, said “We should do our ‘due diligence’ and investigate further cuts … even if we decide to reject them.” McCullough said that “different scenarios should be viewed over a five year projection to examine the [long-term] impact. This will help explain our (board] choices [about the upcoming budget.” For the next board meeting, McCullough asked Colucci and Huetter to prepare a new budget proposal that would not exceed two percent, a five-year projection of that budget and a history and projection of general fund revenue and expenditures.

One thought on “Garrison School Board Adopts Budget”