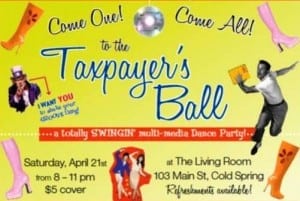 That inner 22-year-old in all of us lurks, waiting for a chance to splash the canvas again, pound on the drum, bring the silly forward.  When 22 is doubled, plus or minus, so much youthful verve gets stashed in the garage. Sometimes that garage needs to get cleaned out, and the verve re-released.  Fortunately Carolyn Lengel and Barbara Lipp are here to assist those who have (at times) mourned the loss of their days of being wild.  How are these two former East Village performance artists-slash-punk rock chick-slash-bartender-slash-now leading quieter River Town lives meeting this obvious need?  Dance parties.  Multi-media dance parties with video projections, movie clips and a disco ball, where the emphasis is on moving those dancing feet and shaking a perhaps widening from too much sittin’-time booty.

Their next party, dubbed the Taxpayer’s Ball, takes place this Saturday night, April 21, from 8 to 11 p.m. at Cold Spring’s The Living Room. 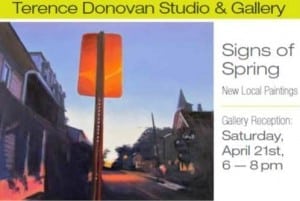 The dance parties took their first breaths at the Garrison home Lengel shares with her husband, photographer Mike Enright.  “I don’t think I had danced for like, ten years,” says Lengel.  “It came to me that there should be dancing.  We have a deck, a view; I thought it would be fun for my birthday.  My husband’s a techie and he always liked to play videos during parties, which people loved watching, so I thought let’s make them projections — videos attract people like moths to a flame.” That first birthday dance party was big hit, and three more have followed and this is their first foray into a public event, one created at the suggestion of Lengel and Lipp’s friend, painter and gallery owner Terence Donovan  who thought it would make a great combination platter deal with an opening reception for a show of his work, Signs of Spring, at his gallery, just up Main Street.

The gallery opening will take place from 6 to 8 p.m. (and “good” wine is promised…) and then revelers can hit the dance floor.

The party is not limited to the middle-aged; there will be no strongman at the door carding those desperate to get in who appear to be under 40.  In fact, a few tweens and teens (by and large related to the party-throwers) may make appearances. These same young’uns were spotted at a recent dance party “running out for a spin of No Speak Americano by Lous Prima and … Po Pi Po…used in a Japanese anime vegetable juice ad … and Istanbul (Not Constantinople) by They Might Be Giants,” says Lipp, giving an indication of little bits of playlists, which also might or might not include Beck, 70s R&B and definitely Nancy Sinatra. 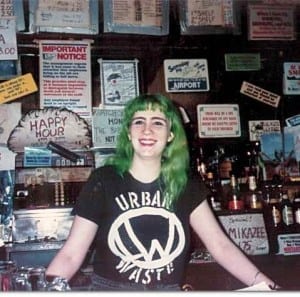 Carolyn Lengel in her bartending days

All that is required of the attendees is that their feet don’t fail them and that they want to dance.  The music will span many eras and genres with the only requirement that it makes you dance — and that there’s a video available.  Lengel and Lipp have put the word out and taken requests, and suggestions, albeit all subject to their veto power.  Lipp says “there’s a real art to dee-jaying.  There are songs that people love, but when they’re played they just don’t work.  They’ve got to have that kind of a beat that you can’t not dance to thing — unless you’re … one of the guys.”  Yes, some of the men are more reluctant: “We had the B-52s on and the room was on its feet, but I’m not sure if some of the guys actually moved,” says Lipp.

Currently the hosts have over six hours worth of clips from which to cull.  The most requested artist is the one formerly known as Prince, but evidently he doesn’t like his songs appearing on YouTube and the videos are usually pulled from the site soon after they appear, according to Lengel, who adds, “You Got The Look had a great video — you’d think he would embrace it.”  Lipp interjects, “Maybe we should shoot one, with someone dressed as Prince!” 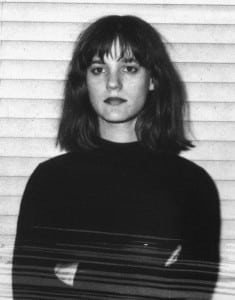 Dressing up in the guise of another is part of Lipp’s heritage. Lipp, presumably one of the few women in Westchester county (she lives in Peekskill) who can say “I was a Wigstock staple,” was a performance artist in the 80s, inhabiting a character called “Frieda” who was “a doll that was almost human size but was small enough to be oddly-proportioned …Her head and shoulders were on top of my head.  There was a little screen, which was hard to spot, for me to see out of, and her arms came out at waist level.” Built for her as a birthday present by a friend, “Frieda” whose personality “started out as sweet, saccharine, soon developed a fake sweetness — she was full of herself, egotistical.”  Frieda became the subject of videos, shot by another friend. “He started bringing them round to clubs: Pyramid, The Mudd Club, Area, Danceteria.  We were even on this cheesy show, Midday Live, with Bill Boggs. They had an audience full of children that day and they all crowded round after the show, breathless, excited about getting an autograph from Frieda.  It was hilarious! We had a cult following.” Lipp was also a performer with a group called No Entiendes, along with famed performance art chocolate-smearer Karen Finley, which performed at the Institute of Contemporary Arts in London.

Lipp was also a go-go dancer for a year.  “Not an exotic dancer,” she emphasizes, “no poles. It was the ‘80s, there was this corporate guy and he just decided to have a club in his office building, on a floor with lots of windows overlooking the West Side Highway.  Three or four of us would dance in go-go cages until sun-up, when they opened the rooftop and served breakfast — oh and I also had a go-go cage built in my apartment!  In terms of the ‘what pays the bills’ deal, then and now, Lipp is a graphic designer and illustrator. “Now life is so normal and drab,” she mock-sighs, “except for the dance parties!”  Still, the past sometimes does rear its nutty head: for a recent party held in between Halloween and Christmas in honor of the two holidays Lipp dressed as a zombie elf. 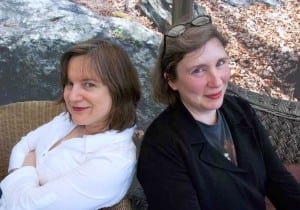 If Carolyn Lengel were to dress in the spirit of her former self, her attire might be a little tougher, torn and shredded. Lengel, now an editor and mom, used to sing (“those who can’t play, sing,” she notes) in a punk band called Bad Tuna Experience (and another called Killer Instinct), which gigged regularly at places like A7 and CBGBs. She also bartended at Downtown Beirut, a bar to which a 1985 article from the East Village Eye accorded “best jukebox in town” honors.  Eventually she gave it up as “my band was a hole I poured money into: paying for rehearsal spaces, paying to have people move guitar amps, dividing all the profits by each band members.”   Eventually, in a trajectory Lengel describes as, “Hmmm, from punk rocker to grad student to wife and mother to editor and party-thrower … and looking forward.”  Indeed Lengel is known for throwing a helluva party, whether it’s one of the Bollywood screenings accompanied by lashings of Indian food, (“No one reciprocates,” says Lipp, apologetically), or the “Later Seder” which seems to occur further into the calendar with each passing year (“Last year we held it on the 23rd night of Passover…” smiles Lengel, who doesn’t happen to be Jewish.) 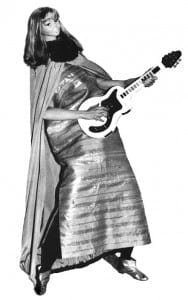 And so to dance parties, which both women feel “Cold Spring needs.”  Those worried about their fitness level should know that Lipp and Lengel have been in training (or rather vaguely planned to do so) intending to “not be so out of breath when we have these parties,” says Lengel.  The kind of “pogo dancing” Lipp has spotted at her 13-year-old stepdaughter’s parties won’t be happening — “too exhausting — but we will have an ambulance standing by, and we’re CPR-trained,” she adds, helpfully.

In the throes of a middle age spent in relatively quiet places like Peekskill and Garrison, does having a crazily creative and slightly anarchic youth leave lingering traces today?  Lipp answers, “Even if my life resembles that of my neighbors, a huge part of me is what I did earlier.  Part of me is wistful, sad that it is the past, as it was fun, but the present, staid and stable, is good too.  I always look back at that period as a most special time in my life.  I have the usual trajectory of aging, more comfortable.  At the same time, it’s not like life should be boring.  You have to keep the spark — hence the dance parties.  There’s kind of nothing else to do here except go to movies, dinner.”

Lipp: “Someone’s gotta do it.”

The Taxpayers’ Ball has an admission of $5, payable at the door. The Living Room is located at 103 Main St.

For the record, so to speak, the first LP Lipp ever purchased was one by Herman’s Hermits; her first 45 “was going to be Pleasant Valley Sunday, by The Monkees, but I was afraid my older sister would turn her nose up at it, so instead I bought Snoopy Versus the Red Baron.” Lengel had no trouble remembering hers: “LP: Best of The Animals, 45: Ringo singles.”
Photos courtesy of Lipp and Lengel, except as noted