County Players closes its 54th season with City of Angels on Friday, May 4 at 8 p.m. The show takes place in glamorous 1940s Hollywood. While trying to maintain his artistic integrity and marriage, a young novelist, Stine (Jarek Zabczynski), attempts to write a screenplay for fast-talking Hollywood producer, Buddy Fidler (Dean Temple). As he creates a story about a private detective, Stone (Jim Nurre), the characters come to life on stage.  Beautiful socialite Alaura Kingsley (Sarah Laine Terrell) hires Stone to find her missing stepdaughter (Robin Meade). The stepdaughter ends up naked in Stone’s bed. Stone is beat up by a bunch of hoodlums hired to get him off the Kingsley case. In the end, Stine confronts his sell-out, alter ego Stone and the manipulative Buddy and quits the project. After regaining his dignity, he is able to regain the love of his wife and all ends well. 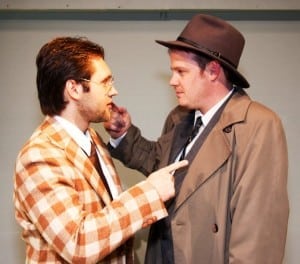 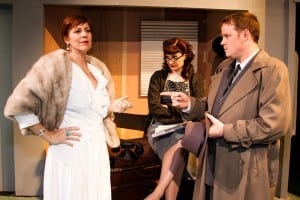 Director Wilson states, “City of Angels is a unique musical that combines a jazzy musical score with 1940s Hollywood glamour and gritty black and white film noir.  Most of the actors play parts in both Hollywood and the detective story ‘movie.’  It takes a special group of actors and singers to bring together these diverse elements. It is also a technically challenging show.  There are many scene changes and locations to be represented on stage, plus the black and white movie scenes and Hollywood scenes in living color.  I’m proud that our talented cast and crew has taken on the challenge and excelled.”