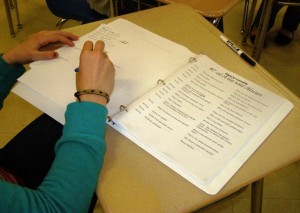 Language, history and food all part of special class

When students enter Marilyn Walker’s ninth period classroom at the Garrison Middle School, they venture out of the country and virtually connect with a composite of cultures in the Arabic-speaking world. The students are taking Arabic, and embracing a learning opportunity to study this challenging language. A traditional focus on reading, writing and, arithmetic keeps Garrison students on track to build a solid educational foundation, which helped earn Blue Ribbon honors for academic excellence from the U.S. Department of Education in 2010. Now seventh and eighth graders in the community are enriching their educations beyond the 3Rs through a variety of elective courses. In a program made possible in part through a grant from the Garrison Children’s Education Fund, a community-based nonprofit foundation, one of the electives, the Arabic course, provides students with a path to discover the language, study Arabic culture, sample its cuisine through food and beverage tastings, and take trips to explore the Arabic-speaking world.

Eighth-grader Marina Martin, who uses the name “Akilah” with her Arabic classmates, has been using her classroom passport as a portal to research countries of the Arab world for the past two years. “Once a month we go to a different country for a culture trip,” Martin said. “We study the flag, the government, religions, and food. We recently went to Iraq and learned a lot about the Fertile Crescent. It’s always good to understand other people and we’re having a lot of problems in the world and we need to try to understand.”

Though she’s completely comfortable in the middle school setting (her own children range in grades from pre-K through eighth), Walker’s experience in the classroom is anchored in higher education. With a Ph.D. in Middle Eastern history from Columbia University, she spent nearly a decade teaching at Columbia and is currently an adjunct professor at Marist College. “I’m not a trained Arabic teacher by any means,” Walker said, “but I’m an historian and I felt confident that I could offer an introduction to Arabic.”

With a broad base in Spanish and Portuguese, Walker began her Arabic studies as a successful student of language acquisition. She spent two summers studying Arabic at the Middlebury Language Schools and followed that up by completing a one-year fellowship in Egypt through the Center for Arabic Study Abroad. The study abroad provided her with the opportunity to immerse in the local community and culture, and to build on her classical base of the language by developing a colloquial understanding to communicate in the contemporary Arab world.   “When I was based in Egypt, I was working principally on language,” Walker said. “When I first arrived in Cairo, I was so excited. But I walked into a store and sounded like someone from the middle ages.”

A lively discussion in class

Learning the alphabet may sound like Pre-K curriculum, but with its ornate script and right-to-left reading and writing format, the Arabic alphabet takes the learning of letters to another level. The Arabic alphabet is composed of 28 letters and a system of 14 symbols. Many of the letters take on different forms depending on where they occur in a word (alone, beginning, middle, or end), and the students are learning to navigate this writing system. But Walker uses a gradual approach to teaching the Arabic alphabet, and keeps the classroom discussion moving, so that the students will welcome the chance to use their vocabulary in conversation.

Conversation moves well beyond shukran (Arabic for thank you) and shish kebab, though food serves as a valuable teaching tool in and out of the classroom. A 2011 field trip included a visit to the Metropolitan Museum of Art and a Lebanese restaurant. Eighth-grader Jack Revkin, “Lyman” to classmates, is still savoring the experience from seventh grade. “We went on a trip to New York City and to a restaurant where they had great falafel,” Revkin said. “I love spices and the falafel was so spicy.” Revkin ordered his meal using basic Arabic, and he was happy to have ordered something delicious using his new language skills. “It’s a really interesting language,” Revkin said. “It’s important and could help in getting a job. I’ve been taking Spanish since fourth grade, and I’m still taking Spanish, and I think another language will help me.” 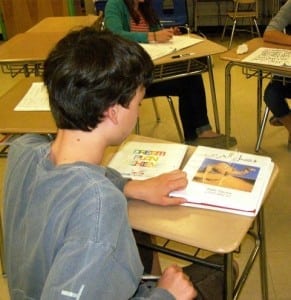 Student on a 'virtual' trip to an Arab land

Some of Mrs. Walker’s students will virtually visit Saudi Arabia and Jordan during class time in May, and they’ll take their spring field trip to “Little Arabia,” a neighborhood in Bay Ridge, Brooklyn. “Teaching this class is very gratifying,” Walker said. “With funding and support from members of the community, that has to be the way of the future for these enrichment programs.”

Garrison School principal Stephanie Impellittiere agrees that the ninth period electives enrich the academic experience for students and provide insight into new areas. “Typically, years ago, ninth period was just a study hall,” Impellittiere said. “Some students still use a study hall, but the support of interested parents and people in the community has created new opportunities.”
Photos by M.Ebner