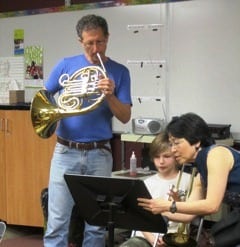 The music program at Haldane is beyond the scope of many schools of its size.  Department head Deb Contini not only has to teach the full gamut, from kindergartners through high school, but also leads and conducts the Jazz Band, which meets one night each week.  In addition to K-5 general music classes, Contini oversees three different “regular” bands: elementary, middle school and high school.  Since scheduling becomes so difficult in high school, there are even multiple class periods for band, including one session during tenth period, which is after the regular school day concludes.

On top of all of this, in order for the bands to sound as strong as they usually do, there are once-a-week specific instrument classes.  For many children, these weekly lessons, not supplemented by private instruction, have formed the basis of a reasonable competency in their instrument by the time they graduate.  Others, encouraged by Contini, seek private lessons to hone their skills and widen their repertoire.  Luckily, there are a great many professional musicians living in this area, some who augment their performing careers with teaching, others who have turned entirely to providing lessons. 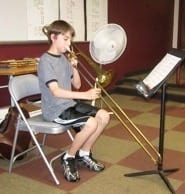 Tapping into this resource, last year the Haldane School Foundation provided funding for a number of local musicians to come into the school to provide Master Classes to groups of students playing particular instruments.  This year, after Lynn Cunningham, a local music teacher who teaches flute to eighth-grader Jerome Famularo volunteered her services, Contini thought more individualized guidance would be most helpful, particularly at this point in the year, right before the upcoming New York State School Music Association’s (NYSSMA) Solo/Ensemble Festival, which takes place locally (in Beacon this year) on April 27 and 28.

NYSSMA is a state-wide organization which advocates for and seeks to improve music education across New York State by promoting and producing appropriate activities and programs for its membership and students in member school music programs. NYSSMA sponsors, among other programs, the all-county music festival and area all-state music festivals held annually in Putnam County, and the solo/ensemble festival, in which over 100,000 students, state-wide, are evaluated in a constructive way after performing graded solos, from a multi-leveled selection provided by NYSSMA, with very specific rules and standards, as well as sight-reading and playing scales.  It is tailored, but not exclusive to students who are supplementing their school instruction with private lessons.  This year, more than 35 Haldane students are participating, in everything from the band instruments they play in school, to piano, string instruments and vocals. 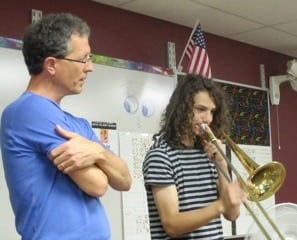 Putting the word out to additional local musicians, Contini was able to provide band students with personalized attention from three local musicians who volunteered their time and expertise to help the kids prepare for their performances.  Each musician worked with groups of four to six children at a time.  Contini also worked with the woodwind group, her specialty — she is a clarinetist — herself, one on one.

Professional French horn player Greg Smith, father of first-grader Roy worked with several groups of brass instrument-playing students throughout last Monday. Smith, who started playing French horn in 4th grade, worked with students from that grade on up through high school, calling each student up to perform, first scales and then the solo being prepared for NYSSMA.

In one group, Smith worked first with sixth-grade trombonist Andre van Dommele, first instructing him on proper posture and positioning, “Sit straight up: your lungs are where the air is.  Put the trombone out in front of you, arms out.  Make sure the music stand is at the right height.”  Offering a general comment he said “Use your strength to put more air in it; fill up the trombone — work on from your diaphragm muscle — that’ll give you more breath.” 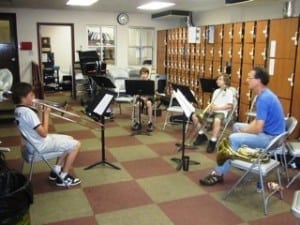 As van Dommele played his solo, For He That Is Mighty, Smith continued the constructive commentary: “Do you have breath marks put in?” (“No.”) “What I would recommend is to go back and put those marks in your music.  Choose the places that will give you some time to take a breath. Think about where the musical sentences are.”  At times, as with other players, Smith stopped van Dommele, asking him to take a look at a specific passage, “Let’s work on this little phrase here — that got a little bit off.”

With another sixth-grader, Jonas Petkus, also a trombonist, who was playing Habanera from Carmen, Smith suggested “Don’t rush this.  The tempo on the first page is good, but the second page pushed more. … Also, in measure 23 you have an F sharp that’s up above, we need to get that natural.”  After working on just that, Smith asked Petkus to play it again and listen for the difference, which Petkus then acknowledged. Smith continued, asking “Is there a way for us to make more of a contrast with the dynamics?  It goes from forte to very soft, and all of the dynamics should be made more so.”  Smith also urged Petkus, as he later did with others, to “make sure you get a hold of the recordings of this music.  Really listen to it.” 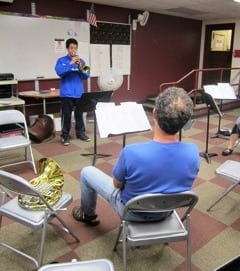 Both van Dommele and Petkus said they got a lot out of the private sessions. van Dommele noting “He got me to put more air into my horn, making a louder sound, and also now I know when to slow it down.  It’s cool getting advice from an actual musician; someone just doing it as a hobby might not know as much.”  Petkus added, “I learned about the accents: getting louder and softer in different parts.  Plus you get to see what a real musician thinks of you when you are playing for him.”

Throughout the day, Smith offered a few consistent pieces of advice:  “At the top of the piece, take a moment, count a whole measure at the tempo you want, then, on one, give yourself four beats.”  Smith later expanded on this with an older student, saying “The point is, you want to have preparation.  From the very first note the person listening has got to understand the rhythm.  I want to be actually seeing your breaths reflect the rhythm before you start.  Imagine that you’re standing along the river with a canoe and you’re pushing it into the river.  Right now you’re just joining it, so feel it before you play.”

With a slightly older group, Smith got a bit more technical, telling eighth-grader Theo Henderson on trombone that it was “really important you realize what unit of time you’re working with.  Have more of a feel of the eighth note.  Show us the difference between these notes and those.”

Smith, who grew up in Indiana, near where “they actually made the horns” had the advantage of a “great music program growing up.  I knew by the age of 12 that this is what I wanted to do.  I had so much fun going through the school music program.  Our band teacher had been second trumpet with the Indianapolis Symphony and he never lost his ambition.  He was a trumpet geek and we were exposed to a pretty good level.”  Smith says that once young musicians “can get past the point where it’s aggravating technically for them, it’s fun.”

Smith, who currently plays French horn in the pit orchestra of Broadway’s The Lion King, and who formerly taught at St. Ann’s School in Brooklyn, also teaches privately in this area.  He described conducting the mini-master classes “fun — I know most of these kids from the blacktop; I’ve played ball with them out there.  … These kids are playing their instruments at a really good level.  Deb Contini is giving them a really good basis; they’re doing great. I’m empathetic with the nerve factor, I was shaking when I played my first solo.”

One thought on “Mini-Master Classes from Local Musicians at Haldane”