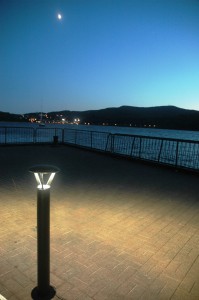 Light and the moon

Citing economic contingencies, Cold Spring’s mayor and trustees voted unanimously last Tuesday (April 17) to install more short bollard lights instead of tall “shepherd’s crook” lamp poles at the village dock. The vote revises a December 2010 decision that called for a mixture of both bollards and lamp poles but left room for reconsideration.

With Trustees Bruce Campbell, Ralph Falloon, Matt Francisco, and Charles Hustis joining Mayor Seth Gallagher in the decision, the board hewed back to an earlier “dark skies” design for the waterfront lighting, a project largely underwritten by the Hudson Highlands Land Trust (HHLT) to reduce light pollution and make the Hudson River, mountains and stars visible by night. Initially, HHLT proposed using all bollards for the dock, replacing the higher-maintenance and less energy-efficient lamp posts installed after the dock was rebuilt in the early 1990s. However, after opposition from some members of the public as well as a majority of the village’s Historic District Review Board, the Village Board voted in December 2010 on a compromise, using both the yard-high bollards and tall new lamp poles (likewise more energy efficient than the old lights). The first round of installation left four more shepherd’s crook poles in abeyance, for utilization when needed. On Tuesday, after looking at the amount of labor and costs represented by lamp poles, the Village Board chose the all-bollard approach instead.

James Hartford, of the village-based River Architects firm, told the board that to install the new shepherd’s crook lights, “we would need to put in full footings,” cutting and digging down into the concrete covering the dock, as well as redo an electrical conduit system. “Placing those footings is tricky.” By comparison, the bollards do not need deep footings or revamping of the conduit, said Hartford, an HHLT consultant on the project. Thus, “it’s a big savings for the village” to go with bollards, he said.

“My recommendation is to eliminate all the poles on the waterfront,” HHLT Executive Director Andrew Chmar advised the board. He cited the likelihood that two of the shepherd’s crook poles might be placed at Dockside park and the other two sold to the North Highlands Fire Department, which has expressed interest in them.

Trustee Falloon mentioned his reluctance to modify the 2010 decision but said he found the economic issue paramount. In choosing bollards, “I think it’s important” to demonstrate that “we did it for cost-saving and not to fool those who were against it” 16 months ago, he said. The 2010 resolution suggested a further review approximately a year after installation of the first bollards. In voting now, “we can prove we didn’t go back on our word,” Falloon said. “It’s just that it would cost a fortune” for the taller lights. “I’m not about to saddle the village with the extra cost.”

The entire “dark skies”-dock improvement scheme also calls for a new, safer railing to replace the long-used but makeshift fence. On Wednesday, Chmar pegged the cost of the whole initiative at about $110,000 — some $45,000 for the lighting and design work, and $65,000 for the new railing and related items. Private donations account for about $100,000 of the total, he said. At Tuesday’s meeting, Mayor Gallagher observed that at the village level, “we’ve committed $10,000” to the project, covering the remainder.

“I believe the board agrees with me that this is a huge public benefit being achieved,” Chmar said after the meeting. Along with “both the aesthetic and safety improvements” he cited energy savings and the fact everything is being accomplished “with just a small percentage of the total cost borne by the public itself through the village participation.”
Photo by L.S.Armstrong