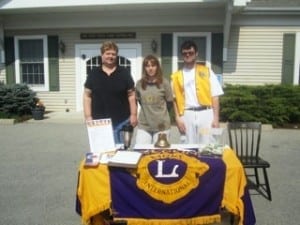 The Cold Spring Lions Club once again provided the community with a “Shredder Day” on Saturday (April 21.)  Local residents were able to bring as much paper documents as they wished, and, after being loaded into a bin, the material was shredded in front of them, in a truck equipped with commercial shredding equipment on site, in front of The Nest Childcare Center.  Volunteer members of the Lions Club were on hand to help people toting boxes from cars, and this year brought the largest turn-out of people, resulting, perhaps from increased media coverage of identity theft.
Photo by A.Rooney