“Once you sell you’re part of the industry,” said a remorseful property owner in Bradford County, Pa. The subject was the controversial natural gas extraction process known as hydraulic fracturing and the leasing of land for the drilling. The interviewer, on a video documentary shown at the Desmond-Fish Library on April 22, is Assemblywoman Sandy Galef.

Galef introduced her 90-minute report to a sizeable audience in the library’s meeting room. The video, which resulted from a driving trip with staff members to the western Pennsylvania region where a hydraulic fracturing boom and somewhat of bust has taken place over the past few years. Galef said her video was edited down from over six hours of tape her staff shot as she questioned homeowners, business people, academics and government officials about the impact the introduction of drilling and related activities had on their community.

Hydraulic fracturing (fracking) is a drilling process that seeks to exploit openings in underground rock formations. To frack a well, drillers blast millions of gallons of water, sand and chemicals deep underground to crack shale deposits and release trapped gas.

Explaining her journey Galef said: “Seeing for yourself gives you a different perspective than just reading about an issue.” As a state legislator Galef will someday likely have to vote on fracking.  Considerable support has been generated (including among her upstate colleagues) for allowing the process to proceed along the western New York State geological area known as the Marcellus Shale to stimulate the economy by creating jobs.  Even louder protest has been heard over fears the drilling process can poison water supplies and pollute rivers and streams and permanently scar the land, including by the destruction of forests.

The state Department of Environmental Conservation (DEC) has held hearings on the issue and is presently sorting through 70,000 written comments before it issues a report on the potential for allowing fracking and under what regulatory conditions. Early in his tenure Gov. Andrew Cuomo underscored the economic benefits allowing drilling could bring western New York, a long economically depressed area. But he lately seems more willing to allow the review process to take its course.

The video, which Galef said strives to be even-handed, paints a difficult picture of a county eager for economic benefits and perhaps suffering from some buyer’s remorse after rushing to allow gas companies and other contractors more or less free rein to acquire land and set up shop without thinking through all of the consequences. Galef said she was invited to visit an actual drilling operation but was confronted with an indemnification agreement legislative counsel advised her not to sign.

Among the points made by a panel put together by the Penn State Cooperative Extension were:

Galef spent considerable time with an anti-fracking activist, Crystal Stroud, who reported high amounts of cancer-causing barium, lead, methane and other contaminants on her property and in her drinking water. She said the Pennsylvania Department of Environmental Protection wasn’t helping the many people with pollution consequences from fracking and further that a former director of the agency had received a “big job” from one of the leading gas companies. 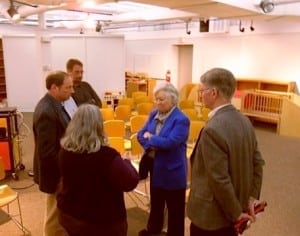 Galef continues to listen after the show is over.

Another interviewee was Dr. Poune Saberi, a physician and public health expert at the University of Pennsylvania, who has called for funding for health studies to determine whether residents’ health is seriously affected by fracking and, if so, to learn appropriate methods of treatment.  Saberi said Colorado was the only state to have initiated such studies. Pennsylvania has just passed a new fracking law, which will grant state doctors access to information on the chemicals used in fracking in return for confidentiality agreements.

After the screening, which included popcorn, Galef entertained questions and statements from the audience, many of whom had stories of fracking good and bad on Pennsylvania properties or concerns about upstate property. No one in the audience admitted to having a mind changed by Galef’s film but then a forum on a rainy, chilly Sunday afternoon might tend to draw only the already engaged.

Galef emphasized that while Philipstown was not on the Marcellus Shale she and others remained concerned about the impact wide-scale fracking might have on drinking water supplies as well as the environmental health of the Hudson River and other tributaries.

During the discussion Philipstown Supervisor Richard Shea emphasized that local governments can adopt and enforce policies on fracking. He said he didn’t believe Philipstown would allow it if it were ever proposed. Galef expects to have her film available online in the near future.
Photos by K.E.Foley