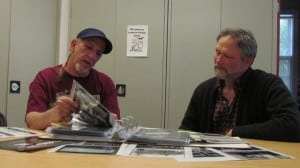 Jan Thacher and David Limburg are on a mission, one that is taking them “back to the future” or perhaps more accurately, “forward to the past.” They are using modern technology to protect, catalogue and make easily accessible the fascinating and extensive photo collection housed at the Putnam History Museum (PHM) – the local organization previously known as The Putnam County Historical Society and Foundry School Museum. “It’s like a tree that just explodes. When information comes in (in the form of a photograph) it often leads to something else and then that leads to something else again,” Thacher said of their work with the historic collection.

Working as volunteers, Thacher and Limburg, are creating and cataloguing digital copies of some 700 glass plate negatives that capture life as it used to be in Philipstown. When that task is complete they’ll move on to digitize the collection of historic photographic prints that is as large or larger. The project was initiated about 15 years ago by Charlotte Eaton, longtime curator and historian at PHM. Back then, the fragile glass plates were sent to a lab in Massachusetts where an inter-negative was produced which in turn was used to produce a print from which a new negative was created. “You lose very little detail – but no matter what you’re always going to lose some,” Thacher said of the old method.

Things have been greatly simplified since, thanks to the digital age. Now, when a historic photo comes in on loan or as a gift to the PHM, Thacher makes a high resolution, digitally scanned copy of it. That image then becomes part of a data base created by Limburg and stored on an Apple computer. The pre-Apple photos have also now been digitized. The new images are up to 14 inches in length at 360 pixels per inch – more than enough for creating high quality prints.

Limburg pulls up a digital favorite: Children on a goat-drawn cart in front of the old Garrison Hotel

Both Thacher and Limburg are fascinated by what they come across in the old photos. Thatcher was stumped at first when asked to pick a couple of his personal favorites. “There are just too many…,” he said. Limburg didn’t hesitate. “I have a couple. One is of small children sitting in a goat-drawn cart in front of the old Garrison Hotel,” he said. The former hotel located at 35 Garrison Landing is the beautiful brick building that is now home to Ironbound Films and Dan Donnelly’s law office. Limburg said he also very fond of photographs that clearly capture people smiling and laughing. “Technically that was very difficult back then because shutter speeds were slow – a second or longer,” he said, explaining that the movement in a person’s face when laughing often caused photos to be blurred. He made a dramatic comparison between 19th century cameras and those of today. “Today, digital cameras go up to about 3,600 ISO. Back then it was about four.” ISO, or ASA in traditional film photography, measures sensitivity to light. The higher the number, the greater the ability to capture and freeze motion.

Thacher talked about a photo that they immediately took to show archaeologists from Michigan Tech University who were conducting a dig at the Foundry Preserve. It was a shot of a large pit lathe, a machine that up to that point had never been seen in photographs of the West Point Foundry. As the archaeologists stared back and forth between the photo and their surroundings, they excitedly came to realize the photo was taken exactly where they were digging.

Another of Thacher’s favorites is a photo taken by Al Terwilliger, ordnance officer at the foundry from 1890 to 1920, of his own office. Clearly visible on the wall behind his desk are four framed photographs. Thacher blew up the tiny photos within the photo and was thrilled to learn that they still exist – as part of the PHM’s own photo collection. “That’s the kind of thing that really gets to me,” Thacher said. Once the original photos have been digitally photographed they are stored with careful attention paid to temperature and humidity. Thacher and Limburg agree that the beauty of digital photography is that it allows research on photo content to continue without risk of damage to the originals. Digital copies can also be used to produce high quality prints for displays or online. Digitization of the old glass late negatives is now complete and work on the museum’s extensive print collection will start soon. Creation of the database for the entire photo collection continues.

More Photos Out There The museum is still looking for more historic photos from around Philipstown. “You can never have too many shots of the foundry, the waterfront or the villages,” Thacher said. He has lost none of his enthusiasm for a project that has been ongoing for years. “The photographic and historic record here is incredible. It’s a very unique time capsule. Our community is …so intact, you can have an old photo of a house – and still find the house today …just covered with aluminum siding. And I think there are a lot more photographs out there.”

Thacher had praise for the photography project’s originators – Eaton and Minette Gunther. “Guided by scant information provided with the original negatives, it was their vast knowledge that helped put the puzzle pieces of our local history into the larger fabric – and made this project possible.” Anyone who has old photographs that they would like to have identified or possibly donate should make an appointment by contacting museum staff at 845-265-4010 or by emailing [email protected]

Thacher said the museum doesn’t necessarily expect everyone to donate their historic photos – but he would love to have the chance to make copies. Digital copies of course. He and Limburg are also looking for a few qualified volunteers to help with data entry for the photo collection. Anyone interested in volunteering should also contact museum staff.
Photos by M.Turton