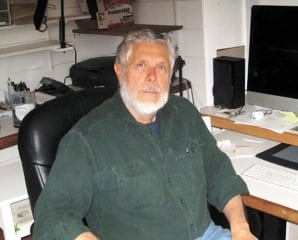 On Friday, May 11, longtime Depot Theater Board President Claudio Marzollo will be celebrated at a “roast” at the Highlands Country Club in Garrison.  Titled Fifteen Years of Drama, the cocktails and dinner affair will be filled with anecdotes and affectionate jibes at Marzollo from those who have known him through the years through Philipstown Recreation, the Depot, and also the soccer fields of Philipstown Park, which he helped to create.  Marzollo is a very familiar figure around and about town, yet many aren’t familiar with his personal and professional background.  This is part one of a two-part story on Marzollo and looks at his life pre-Philipstown; the second part, out in about a week, goes into detail on many of the Philipstown projects he has been involved with.

Born in Italy, Marzollo spent his childhood in Milan, where his father was a conductor and singing coach.  The war years were difficult, a low point occurring when their apartment was bombed out. After the war his father arrived in New York in 1947, on a concert tour, and wanted to stay.  The two- to four-year-long wait for the allowable quota of Italian nationals seemed interminable, but through a loophole — Marzollo’s grandfather was living in London when his father was born — Marzollo’s father was able to claim British citizenship, and with the quota for the British unfulfilled, he was able to move with Claudio, just shy of ten years old, and Claudio’s mother, arriving in May, 1948.

Arriving with not a word of English, Marzollo was a quick study, picking it up well within three months under the tutelage of relatives and teachers in Pittsburgh, where he went to live soon after arrival, as his father was on an extended concert tour in Buenos Aires.  “I was a novelty there.  The teachers worked hard with me to teach me English.  So by the time I came back to New York, language was not a problem,” though Marzollo’s parents never learned it well, because in their professional lives, those they worked with either spoke Italian or, as opera singers, wished to learn it. “As a translator, I got away with murder,” says Marzollo, smiling as he remembers.  The entire immigrant experience was “scary, intimidating, exciting and new — especially compared to World War II.”

Back in New York, the family settled in an apartment on 58th and Sixth and Marzollo attended a public elementary school located where the Ziegfeld Theater now stands. Marzollo relished the diversity of the student body there. “It had only one class per grade, but it drew from a very wide area.  It was integrated and I had some friends who lived on Central Park South, some in Hell’s Kitchen. Not continuing in his father’s musical tradition — “My father early on established that I had no musical talent.  He also said ‘One musician in the family is enough!’ — Marzollo speaks of “doing my math homework to the voices of Metropolitan Opera stars — my father’s studio was in the apartment.” His father was also the assistant to the renowned conductor Arturo Toscanini for his NBC Symphony Orchestra broadcasts, and Marzollo recalls “going up to his place, having him tell me Italian fairy tales.”

At the selective public high school Brooklyn Tech, Marzollo was exposed to not only academics, but to a host of shops and technical classes which he called upon years later when he turned his focus to creating sculptures. Attending Tech, transferring from a local high school, wasn’t easy, as “I was behind in shops and had to go to every 9th and 10th period, as well as summer school, as they didn’t accept transfer credits.”  The hard work paid off, as he was accepted into Columbia University, where he enrolled in the Navy.  For two years he was sent to the Great Lakes Naval Station training center in Illinois, where he learned to sail on Lake Michigan and participated in a great number of sail races, including three Trans-atlantic Races, “and that’s been a passion ever since.” (Marzollo is a long-standing member of the Cold Spring Boat Club.)

Once out of the Navy Marzollo took off for Europe with his savings of $750, and spent six months hitching from Northern Scotland to Egypt. After journeying to Italy, Greece, Turkey and Syria, Marzollo was on the Sahara Desert Road in Egypt where a day’s hitch-hiking yielded only “four camels and one mini-bus full of Germans.  I went back to the fleabag I was staying in, said ‘the hell with this,’ took the train to Alexandria, a ship back to Italy and came home.”  On his return, he got a job with the Port of New York Authority as a junior executive.  He also participated in a great number of sail races.

By this point, the mid-1960s the tides of conformity were a-changing, and, as Marzollo points out, “As a bachelor who knew how to sail and had free time, I was a wanted commodity [by boat owners participating in races].  When his request for an extra week’s leave without pay in order to join a Buenos Aires to Rio race was denied, Marzollo quit, joined the race and stayed on for a few months in Rio.

Home, by then was a tiny five room tenement apartment in the East Village (with no sink in the bathroom) with the lofty rent of $43, rent money covered by driving a cab two nights a week.  Marzollo spent the next few years “trying to write novels and being a hippie” in the East Village.  By the late 1960s he started “making things and getting into things — sort of like a sculptor. Then I met Jean.”  Jean being, of course, his wife, famed children’s book writer Jean Marzollo (for a Philipstown.info profile from last year CLICK HERE).   They met through a group ski house full of friends, “She was invited…we were dating other people…we met a while later…she was having a party…she invited me…I went…that was 1968.”

Around that time Marzollo “started doing sculpture more seriously.”  Untrained, he used the knowledge which germinated back in his Brooklyn Tech days in his creation of sculptures made from mixed materials, often consisting of welded aluminum and plexi-glass and conveying “movement, calm, change, color.  They are meditative, quieting.  They work best in a subdued light and have a quiet rhythm.”  Marzollo describes studying the works of mythologist Joseph Campbell and “being very interested in that kind of stuff.  Campbell used to hold weekend seminars to raise money for his wife’s dance troupe.  These were very formative in my way of thinking.”  Several of Marzollo’s pieces can be found in the book-lined study (lots of books on technical techniques, and also an array of bread-making cookbooks were spotted) where he works today.

By the mid-1970s Claudio and Jean found themselves living with their two small boys in a loft in Chelsea.  With both working at home, home just didn’t work.  “We needed an office for Jean and a studio for me. We always had an idea of living in the country and we looked, on and off, for a couple of years.  I had visited this area when I was a kid.”  It was also important for Marzollo to have his studio space, with its noise and fumes, apart from the family’s living space.  “It was a time when things were still affordable.  This house had been for sale for a while.  All the locals had seen it and thought it was overpriced.  Then, soon after we bought it, everything changed and it seemed underpriced and everyone said ‘What a deal.”  Marzollo says that he liked Philipstown right away, “I was a city boy, but we took to it.  Jean was on the Haldane school board for eight years in the 70s-80s.  We got very involved.”
Photo by A.Rooney

END OF PART ONE

One thought on “Claudio Marzollo to be Roasted and Toasted”