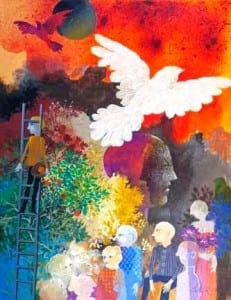 College has a life-long impact on artist

Donald Alter is a long term resident of the Hudson Valley who will celebrate his 82nd year in 2012. Although in faltering health, he vigorously paints, draws, collages and creates in a profoundly experimental way, indicative of his scholarship during formative years at Black Mountain College, Asheville, NC.

Alter attended Black Mountain as a student from 1948 to 1950 and again during the summer sessions of 1950 and 1951. Historically, Black Mountain is renowned as an experimental, liberal arts, and almost utopian college community, dating back to its origins in 1933. Over a 23 year period, only some 1,200 students were enrolled, including the celebrated artist Robert Rauschenberg, among others. The profoundly influential faculty that established Black Mountain as an experimental center for the development of the American contemporary movement included Joseph and Anni Albers who brought with them from Germany the avant-garde provocations of the Bauhaus philosophies of rigorous investigation, experimentation and foundations in many varied visual and material disciplines. These were always coupled with the student’s orientation and personal development.

While teachers and students were in flux, some coming for a semester, summer school or for the duration of several years (such as Alter), teaching approaches, administration and philosophically creative approaches also changed. While immersed in the buoyantly creative and social life of the “community”, Alter met, knew or interacted with fellow students and teachers such as Rauschenberg, the Albers (studying painting, color theory and textile design), Joseph Fiore (studying painting and drawing), the painter Kenneth Noland, art critic Clement Greenberg, musician/composer John Cage, dancer/choreographer Merce Cunningham and many others. An example of Alter’s youthful vibrancy at this time might be epitomized by an affectionate memoir by fellow student Martha Rittenhouse: “Bob [Robert Rauschenberg] was one of the students at Black Mountain who had rhythm in their souls …. The other ones were Delores Fullman, Donald Alter, Ulrich Heinnemann-Rufer, and Errissinola Genesi, called Mitzi. I envied them with all my heart.”

In retrospect, Black Mountain College, its community and faculty was to have a life-long influence for the foundation and methodology for Alter’s work to come, both as an internationally successful textile designer, artist and member of whatever creative community he is associated with. His knowledge and digestion of 20th Century Modernism, the principles of design, color, line, plane, form, opacity, transparency i.e. the visual language of art and art making, are so internalized that he has tremendous facility to almost render anything that should come to mind. 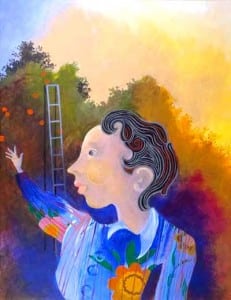 Alter’s most recent and comprehensive body of work to date, comprising landscapes, abstract paintings, drawings and prints will be featured in a two part solo exhibition: at Hudson Beach Gallery, 2nd floor at Hudson Beach Glass, 162 Main Street, Beacon. The show, Donald Alter: Chromatic Tales, will be on exhibit from May 12 to July 5, 2012.

The reception for Part 2 of Donald Alter: Chromatic Tales featuring prominent early abstract paintings juxtaposed with new figurative works, will open on Beacon’s 2nd Saturday, June 9 from 6-9 pm; through Thursday July 5.
Tony Moore is a sculptor who co-curated the exhibitions with Harold Plochberger.

One thought on “Donald Alter: Beyond Black Mountain”