Neither snow, nor rain, nor hamstring injuries shall keep a courier or duathlete down. When it comes to endurance on the job and in competition, Herschel Goldwasser of Garrison sets his sights on the last mailbox, and the finish line with a parallel focus. And the hilly terrain of Garrison provides Goldwasser with a place to ride to improve performance and fitness, and appreciate the outdoors.

As a U.S. Postal Service mail carrier at the U.S. Military Academy, the Philipstown resident is making his rounds this week, despite sustaining a mild hamstring pull Sunday morning during the final stage of the Second West Point Duathlon held April 29. A fundraising race orchestrated by West Point’s Alpine Ski team, the duathlon combined the disciplines of running and cycling, and Goldwasser, who trains along the challenging hills of Garrison, posted a time of 1:35:40. He turned in a third-place finish in the 60-64 age group, sixty-ninth overall in a field of 121 finishers.

At 61, Goldwasser leads an active lifestyle and has competed in a range of competitions. This year’s duathlon, set in three stages, combined an opening two-mile run, a 14-mile bike ride, and a two-mile run for the final leg of the event sanctioned by USA Triathlon. “The bike portion was very tough,” Goldwasser said, “but the run was easy. Still I pulled my hamstring again at the mile turnaround. I was a little worried that I might have to limp back in.”

Race director Danica Elliott said that due to scheduling, the course was moved to a new location this year, and the run was relatively easy, paced along the Hudson, but the new bike leg was more demanding. “With the duathlon, the event is a little more accessible than a triathlon” Elliott said. “It’s a sprint distance, and participants can have a lot of fun and compete.” 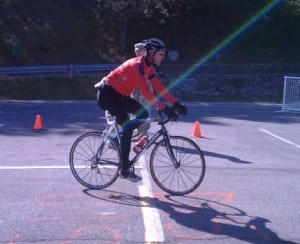 Goldwasser prepares to dismount after completing the 14-mile bike leg

Some days, he rides his bike to work, reducing his carbon footprint, and getting a workout in as well. “I can ride to work,” Goldwasser said, “and some days that’s my training ride. Today I trained by riding to and from work, which took 40 minutes to get to work and 55 coming home. It’s more uphill going home.”

Goldwasser and his wife, Barbara Downey, moved from Tarrytown to Garrison in 2000, and along with their Shepherd/Lab mix family dog, Puck, have grown comfortable in their surroundings, relatively close to family and friends in the city, but a world away in the Hudson Highlands. Goldwasser remembers jumping on his first bike when he was about eight years old, and taking long rides around Far Rockaway with a group of friends from Queens. “My parents probably didn’t know what we were doing or where we were,” Goldwasser said. “Getting a bike opened up a new world to me, and when you’re a kid, it’s freedom.” He associates two-wheeled transportation with freedom as well as love and friendship, and he and his wife have enjoyed decades of riding together.

When the two first met at a Halloween party on Mercer Street in Manhattan, they quickly connected, though Goldwasser was logging more hours with his four-wheeled vehicle than his two-wheeler in those days. “Herschel was a taxi driver when we met,” Downey said. “All that winter, he would call me on his dinner break. By spring time, we were taking bike rides together.”

Downey was riding a girls’ Peugeot at the time, but not for long. The two became engaged, and with the engagement came a practical gift that would shape their future and outdoor lifestyle. “My engagement gift from Herschel was a bicycle,” Downey said. She loved the new bike and has been riding with Goldwasser ever since.

Goldwasser enjoys riding any time, solo, with his wife, and with groups of friends. In preparation for the recent duathlon, he rode many miles with training partners, his brother-in-law, Kevin Downey, a Bronx resident, and Lt. Col. Curtis Edson of West Point. Edson turned in a second place finish in the 45-49 age group in the race, with a time of 1:21:24, twenty-fourth overall. “It’s Herschel’s fault I even did this race,” Edson said. “We go on a lot of rides and have a good time.” 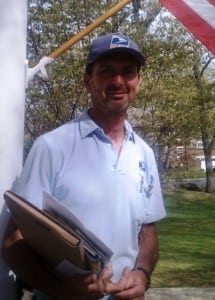 Goldwasser has served the U.S. Postal Service for 25 years

In addition to his training, Goldwasser maintains a healthy lifestyle at home and on the job. A postal carrier for the last 25 years, with 11 years of service at West Point and 14 in Bronxville, Westchester, he likes to keep moving and maintains a healthy diet. “I’m a vegetarian,” Goldwasser said. “I try to eat well, and after a hard workout, I’ll try to eat something with high protein. I’ll eat eggs or beans or something along those lines. It’s not easing finding time to train, and a lot of people with long working hours struggle. It’s tough to schedule training into a work schedule. If you don’t have a lot of time, you have to go for shorter, harder rides. After a race I’ll ask myself ‘why am I doing this?’ but it’s for the fun, and since I was a little kid, it’s been bikes.”
Photos by M.A.Ebner