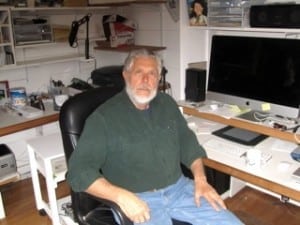 Second of a two-part story on Claudio Marzollo, who will be celebrated at a “roast” at the Highlands Country Club in Garrison on Friday, May 11.  Part one focused on Marzollo’s life before moving to Philipstown.

By the mid-1970s Claudio and Jean Marzollo resettled from Manhattan to Cold Spring, a complete change of environment, but one they both took to immediately. “I liked Philipstown right away,” says Marzollo, “I was a city boy, but we took to it.  Jean was on the Haldane school board for ten years in the 70s-80s.  We got very involved.” How involved?  What follows is a description of some present day Philipstown institutions Marzollo had a hand in founding and/or developing:

“One day, when the kids were in second and third grade, I wanted them to get an introduction to soccer, but there was no soccer in Philipstown.  I went to Town Hall, asking them if we could use their space to hold a meeting upstairs for parents.  They told me to go upstairs and talk to Rec since they were talking about starting a soccer program. This was in 1981 or ’82, and they had one full-time and one part-time employee and had just borrowed and begged facilities from everyone since they had none of their own. They had a very small program with a very limited budget.  As a point of comparison, then they had revenues of $50,000, and now it’s a half million dollars.  The Rec Commission only had four active members.  I was appointed, along with two other people.  So, we started a soccer program.  It was the first time soccer was played in an organized fashion.  I was told ‘this town is a football town.’  We played with orange cones for goals, using coats to delineate sidelines.  We started with six teams in Mayor’s Park. Then a few of us got together with Kevin Keegan and helped to start a joint soccer club at Haldane and Garrison Schools. Nowadays Rec soccer always attracts 200 to 300 kids.”

In 1993, Jean Marzollo, after both sons were in college, and her friend Carolyn Rossi Copeland, whose children were not yet teenagers, feeling a gap amongst the town’s offerings, decided to start a little theater group for teens.  Using the First Presbyterian Church for rehearsals and St. Philip’s Church Parish Hall for a theater, they put on Godspell and Joseph and the Technicolor Dreamcoat with Jean as producer and Carolyn as director. Chris Novak and Claudio built the sets and stage.

“Two years later, our son Dan tore his ACL and was home from college recuperating from surgery.  He saw that the Hand-to-Mouth Players, the group that then had the lease to the old train station in Garrison, were having auditions for Marvin’s Room, a play he had always wanted to be in.  He got the part and it was our first time in the Depot Theatre.  We thought, ‘What a great little theater’ despite the fact that on opening night there were about 10 people in the audience and 6 of them had come there from dinner at our house!

In early ’96, Jean, together with her friends Irene O’Garden , and Patricia Adams were discussing the difficulties of putting on shows at St. Philip’s.  Theatrical productions sharing space with a pre-school meant that sets had to be taken down each night. They asked Claudio about getting the use of the Depot Theater.  He approached the Hand-to-Mouth Players, but was turned down. “I then reached out to Morrie Roberts, head of the Garrison’s Landing Association about the Depot Theatre,” says Marzollo.  Roberts was receptive because the group using the space had no real connection to the community any more; few involved were locals.  “Morrie said that if they changed the lease, it had to be with an organization with financial backing.  I approached Rec and the Town Board and with the support of Supervisor Bill Mazzuca, the Town agreed to take on the lease.”

Marzollo continues, “In the fall of ’96 we took over the theater.  The Rec Commission didn’t know anything about theater, so they asked me to put together an advisory group, called Philipstown Performing Arts — now it’s the Philipstown Depot Theatre, a 501c3, in what is called a ‘local development corporation,’ which is part of the Town but distinct from it.  Members of that board are appointed by the Town Board to ensure that it remains under local control.  We’ve been very successful, but it’s always a challenge.  The local development corporation was started because while we get a lot of support from the town there still isn’t enough, even with the ticket revenue from 67 seats, to cover expenses, although it’s pretty close to being self-supporting.  We’ve raised money at benefits and receive a tiny amount from grants.  We have four strong programs: adult drama and musicals; the children’s program; Music Tracks, which includes locals and also well-known, out-of-town musicians; and Depot Docs.  We have a terrific staff, all part-time, all of whom work a lot more time than they’re paid for because they all love what they’re doing.  The success of the theater shows all their efforts.”

The Depot’s Executive Director, Amy Dul returns the praise, saying “Whenever I’m working with kids in the theatre and Claudio pokes his head in to see what’s going on, I introduce him, “This is Claudio Marzollo; he’s the father of the theater, or at least the Depot Theatre.” And that’s the way I think of him, nuts to bolts he puts every effort into creating a place where kids and adults can appreciate and participate in great theater.”

1996 was a very active year for the Marzollos.  Jean had been friendly for years with Patricia Adams, wife of Open Space Institute (OSI) founder John Adams.  Through this friendship OSI was approached with a “since you have all of this property in Philipstown, could you give some back to the town?” request.  In that year, OSI made the old Malcolm Gordon School fields available to the town, with one stipulation: the donation was contingent on the creation of a driveway and parking lot.  “I got out my chainsaw and took six months off of work,” says Marzollo.  “Jay Varricchio, a parent, was the head of the Operating Engineers Local training program for that union.  I got Jay to bring his students in, and they built the driveway and parking lot, and that triggered the donation.  They also built the north field.” In 2008, the Town recognized Marzollo’s overall contribution to Philipstown Recreation by naming its community center after him.

Friends of Recreation
Friends of Recreation
was started to augment Town funding, to facilitate improvements like the planned pavilion at Philipstown Park.  Marzollo was the president for the first three months, but turned the reins over to Jeff Dain; likewise Steve Ives is now the Board Chair at the Depot Theatre.  Marzollo is feeling the need to step back a little, “I’ll be 74 this summer and it’s time to bring in new blood.  Steve is doing a terrific job, and Jeff is great.  For many years I was the point person in Rec but when Bill Mazzuca retired I got him on the Commission and he became chair.  I’m still on all the boards, but enjoy not getting the problems no one wants to deal with and I’m happy not to be making agendas!

When the roast concept was brought before him, Marzollo didn’t resist, seeing it as “a good opportunity as a fundraiser — we needed to have one. Plus, it’s a good excuse to have fun.”  The evening will begin at 7 p.m. on May 11, and promises “cocktails, dinners and a few surprises!”  For tickets call 845-424-3900 or email [email protected]
Photo by A.Rooney