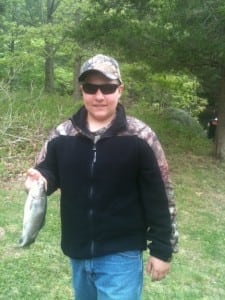 Under partly sunny skies, the Nelsonville Fish and Fur Club hosted its 24th annual Kids Fishing Day on Sunday (May 6) at the Cold Spring Reservoir. The event drew 102 children who brought along an untold number of parents and grandparents. The large turnout was obvious to anyone who encountered the overflow of parked cars as they drove past the reservoir on Fishkill Road. 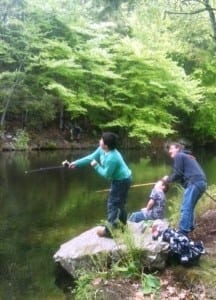 The event, held in memory of longtime Fish and Fur Club member Tony Savastano, was made possible through donations from such organizations as the Cold Spring Fire Company, the North Highlands Engine Company and the Village of Nelsonville. With additional help from various local merchants, the club was able to stock the reservoir with 300 fish, at a cost of approximately $1,000 according to club member Mark Frisenda.

Beyond the fishing, there was free food and raffle prizes, all covered by the donations. “We wouldn’t be able to do this without the sponsors. It’s such a good family event and it’s nice to be able to keep it all free,” said Mike Savastano, a club member and son of the late Tony Savastano. 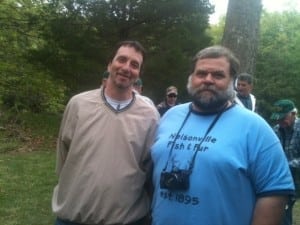 Since the event catered to kids of all ages, it wasn’t uncommon to see a family with very small children standing under a canopy of lures that had been cast into the trees above. But not all of the kids were so small or unsteady in their casting technique. “I fished my limit but I’ll be back sometime this week”, said Aaron Culotta, 15, who had caught the five fish allowed and held the lead in the biggest catch contest as of midday. As happy as Aaron was with his 14-inch trout, he was determined to see if he could nab something bigger. “There’s a real big one in there somewhere,” he added, referring to one of the stocked fish reported to be about 18 inches long.

Late day reports coming from the event revealed that 18-inch fish to still be on the loose somewhere in the reservoir. Still, a fish measuring over 15 1/2 inches ended up on the end of a line cast by Chris Pidala, the eventual contest winner. Congratulations to Chris Pidala, Aaron Culotta and all the young casters.
Photos by P.Smith