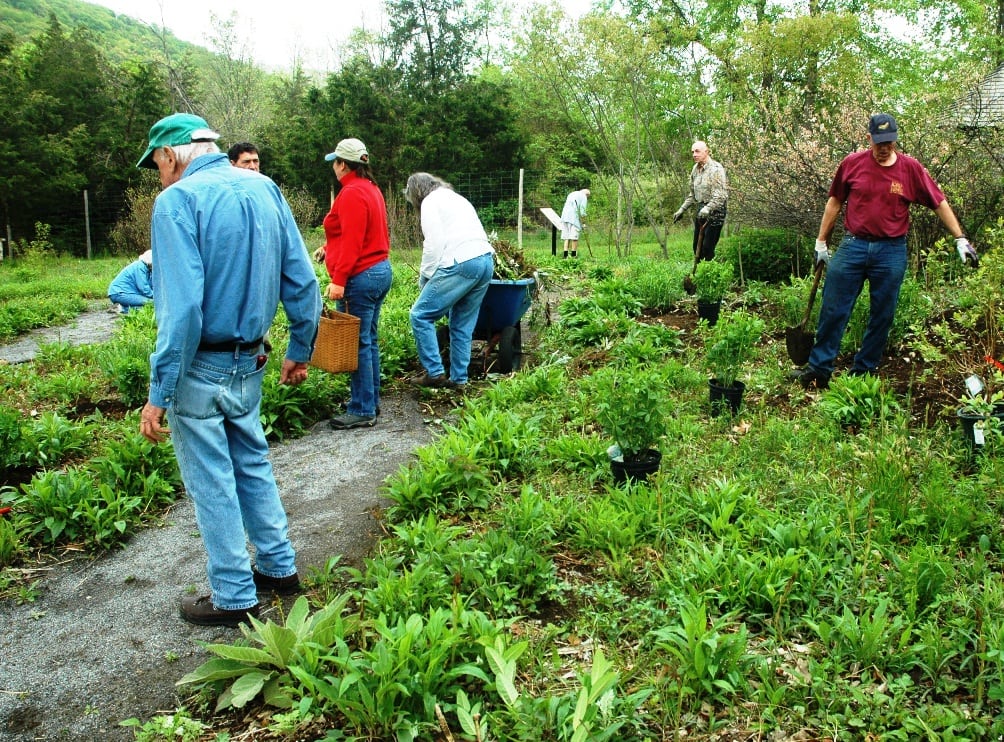 Volunteers set to work at the Ann Odell Butterfly Garden.

The guests of honor failed to make an appearance, but birds chirped and a long black snake slithered by when volunteers spent part of Saturday (May 5) at the Ann O’Dell Butterfly Garden at Fahnestock State Park. Wielding trowels, shovels, shears, weed diggers, wheelbarrows, and other implements, about two dozen participants turned out at the garden, located behind Hubbard Lodge about a quarter mile north of the intersection of Route 9 and Route 301. The event occurred on “I Love My Park Day,” a statewide observance sponsored by the New York State Office of Parks, Recreation, and Historic Preservation. (Gov. Andrew Cuomo, spent part of the day visiting Franklin D. Roosevelt State Park, off the Taconic State Parkway to the southeast.) 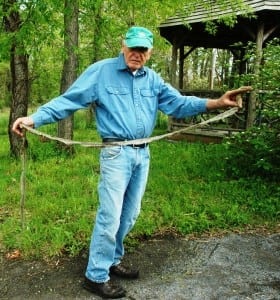 If work demonstrates affection, the volunteers at the butterfly garden were truly smitten. “This is sort of “Love Your Parks Day’ and I particularly love the butterfly garden,” Anne Osborn confessed. Not only is the garden wonderful for butterflies, birds, and wildlife but it delights humans, too, she noted. Besides, when they labor together there, they can both enjoy the beauty and learn something about plants, she explained. “And it’s much more fun to weed with friends.”  She offered a bit of weed-identification philosophy as well: “If you dignify it with a Latin name, we like it.”

According to Paul Elconin, vice president of the Friends of Fahnestock and Hudson Highlands State Parks, the clean-up was one element of ongoing activity to keep the butterfly garden in shape. For Saturday’s project, “we have volunteers from all across the county, plus Westchester,” he told Philipstown.info, in between giving everyone simple instructions: “Mugwort can go; it crowds out everything else. Anything in a pot needs to be planted.” And so on. 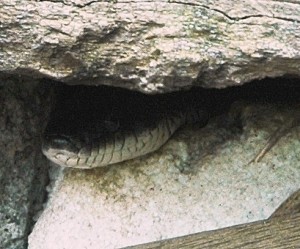 The wary snake peeks out.

Busy hands weeded, dug, carted, raked, mulched, and more. As the morning progressed, the number of plants in pots waiting to go into the earth dwindled and the piles of pulled weeds mounded high.  “Remember, work is prayer, folks!” Ralph Odell called out. Director of natural resource protection for the New York State park system under former Gov. George Pataki, Odell donated the garden in honor of his deceased wife. “I just wanted to get something done with this property,” he said. Pataki, meanwhile, “wanted to save over a million acres. And we did,” Odell added.

George and Kaye Baum came to the garden from Kent, where he serves on that town’s Conservation Advisory Committee. He said he and his wife enjoy hiking in Fahnestock and “love living here. And while we have our own work to do in our own backyard, it’s nice to be here to do something for the community and the state.”

Along with the weeds and occasional bits of trash dug from the ground, a sinuous treasure showed up – an intact, long snakeskin. Later, a possible owner of the cast-off garb wandered by – a long black snake. Shy, at least when finding itself surrounded by two-legged aliens, it slunk through thick green grass along Hubbard Lodge and quickly disappeared under the building’s wall siding.  Perhaps not entirely adverse to a photo-op, it later stuck its sleek head out just enough to be seen.

[VOLUNTEERS 2]  Tools in hand, they replace weeds with garden plants.

[SNAKEHEAD] The wary snake peeks out.