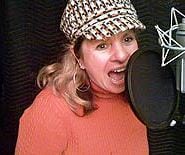 Kati Mac will make a live recording with audience participation under the auspices of Arts on the Lake (AotL)on Friday, May 11, at 8 p.m., in the newly-renovated Lake Carmel Arts Center, 640 Route 52, Lake Carmel. Performing a live version of her latest CD, Save Me From Myself, Ms. Mac says this program will be a little more acoustic and will include four additional songs.  Mac and her band hope to tap the energy of the audience as they produce a live recording, which will then be available on the Internet.

Kati Mac is a singer/songwriter with roots in New York City.  Save Me From Myself, a blues/rock album, is her fifth CD. She was the female lead with Meat Loaf, sang with Sting on a world tour, and backed up artists such as Michael Bolton and Nona Hendryx.  She has had five songs nominated as Best Original Song for Daytime Emmys, and her song Only Love, which she wrote while doing her masters in music composition at SUNY Purchase, was the last theme song for Guiding Light.

Called “a dark and moody blues rock tour de force,” the title track, Save Me From Myself, was written with Nashville songwriter Rand Bishop.  Well-known arranger, composer and trumpeter Tim Ouimette was a co-producer on the CD.

At the May 11 show, Mac will be backed by her band of noted musicians, all of whom have a local connection: Cold Spring’s Al Hemberger on bass, Brewster’s Kevin Hupp on drums, Patterson’s Steve Kirkman and Nyack’s Van Manakis on guitar, and Chappaqua’s Jon Cobert on keyboards/accordion.

With gigs in the last month at The Living Room and The Bitter End in N.Y.C., Whistling Willies in Cold Spring and The Turning Point in Piermont, Mac brought audience members to tears with Bullet Hole Road at the recent Re-Opening Party for Arts on the Lake.  Tickets, priced at $12 or $10 for AotL members and students can be purchased in advance at the AotL website  or by calling 845-228-2685.