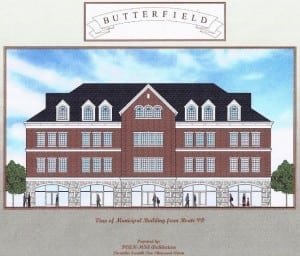 Tactic or the end of the project?

According to a letter he filed at the Cold Spring Village Hall today (May 9) prospective Butterfield developer has withdrawn his application for a mixed-use development including senior housing, retail stores and governmental offices. The immediate impact of the letter is to end formal deliberation of the project by the Planning Board and the Village Board.

The issue, which has been in various stages of review for six months, has become contentious among the various parties including members of the public. “The approval process has become too time consuming, costly and frustrating from our perspective,” wrote Guillaro in his letter. (See entire letter).

Another possible consequence of the application withdrawal is allowing the developer and village officials to confer about restarting the process away from public scrutiny.